A Toronto judge has cleared an elementary-school principal two years after he was charged with criminal assault for restraining a nine-year-old boy who was having “a complete meltdown” in a schoolyard.

Finding that the boy had been kicking, spitting and lashing out during a lunchtime break, Justice Steven Clark of the Ontario Court of Justice rejected arguments from Crown prosecutors who contended that the principal acted too aggressively to neutralize him.

In exonerating Sean Hume, the then-principal of Chester Elementary School, the judge wrote that the principal intervened physically only after speaking soothing words to the child and while also directing school secretaries to call police and the boy’s parents.

But Mr. Hume found himself “running out of de-escalation options,” the ruling says, and acted reasonably in then trying to restrain the boy with a behind-the-back hold that escalated into a heated, inadvertent takedown.

When the case emerged in September, 2018, it became a flashpoint amid growing debate about how schools accommodate students with complex needs and disruptive behaviours. Parents have been pushing back against exclusion and isolation measures as school officials seek to minimize potential risks to teachers, students and staff.

“It is unrealistic to assume that parents and educators may discipline children, whatever the nature of the infraction, in a state of detached calm. Anger is part and parcel of correction,” reads Justice Clark’s ruling, which was released on Dec. 22.

The physical part of the conflict, which was captured on cellphone video, played out in a matter of moments. But successive courtroom delays served to place the principal under a cloud for nearly 30 months.

“It was a long hard 2½ years,” said Jane Ayer, Mr. Hume’s wife, as she questioned why Toronto Police pursued criminal assault charges in the first place.

She pointed out that her husband – a father of three children – has been placed on leave since being charged shortly after the incident. But he was only paid for the first year while he awaited trial. “We’ve been living for a year without his income,” Ms. Ayer said.

Lawyer Robin Parker said her client has been “completely vindicated.”

“Hopefully the decision will be useful for other educators,” Ms. Parker said. But she added that the charges have taken a toll. “Imagine you dedicate your life to working with children and then you’re accused of attacking a vulnerable child who is having a mental-health crisis in front of hundreds of witnesses.”

The events took place three weeks into the start of a new school year, when the male Grade 4 child was behaving angrily in the schoolyard at lunchtime. When the principal approached in an attempt to calm down the child, the student “started yelling profanities, spitting and throwing various objects on the playground property at or in the direction of him,” the ruling reads.

The schoolyard was cleared but dozens of children lingered to cheer on the confrontation. They were “getting a ‘kick’ out of this, that a student was ‘going after a principal,’ “ a teacher later told the court, according to the ruling.

When talking failed, the principal tried to circle behind the student in “an effort to execute a rear restraint. He was unable to follow through with this,” the judge wrote.

That was when the nine-year-old child tumbled to the ground. The student later alleged that the principal had deliberately done this and stomped on him and used his knees to pin him.

But Justice Clark did not accept the child’s testimony. “I assure him, and his parents, that he is not the ‘bad guy’ in this unfortunate incident. However, I do not find his account to be particularly reliable.”

The ruling says that the student acknowledged to police that he has “clinical and anger issues and would lose control by lashing out sometimes and hitting people and that once he was in this state, he could not stop himself and someone would have to do it.”

Justice Clark said that Mr. Hume’s intervention was justified because the principal “did not intentionally push him to the ground” and that “he was entitled to use the force he did because [the student] posed a safety risk to himself, the defendant and other students.” 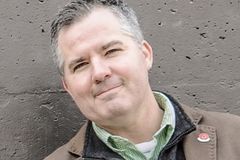