Privacy and legal experts are applauding the Toronto Police Service’s decision to abandon plans for a citywide gunshot detection system, after consultations brought to light potential legal concerns about the software – concerns advocates say they raised from the start.

The system, known as ShotSpotter, uses a network of rooftop microphones to pinpoint the exact location of a shooting and then alert police. The technology, which is used in several U.S. cities, was green-lit by Toronto city council last summer, following a sharp increase in gun violence, including the attack on Danforth Avenue.

Privacy advocates saw the vote as a knee-jerk reaction, and raised concerns about surveillance in the city’s most vulnerable neighbourhoods. More than six months later, Chief Mark Saunders has concluded the risks are indeed too high to proceed.

In an e-mailed statement on Thursday, he said they would be moving forward without the technology after receiving the opinion of Ontario’s Ministry of the Attorney-General that the “ShotSpotter technology could compromise Section 8 of the Charter rights, specifically unreasonable search and seizure."

Brenda McPhail, director of the privacy, technology, and surveillance project for the Canadian Civil Liberties Association, called the decision “a win for privacy for Torontonians, and a win against the encroachment of mass surveillance technologies in our city.”

She says the process happened backwards, and that the consultation should have occurred before the technology was approved by the city.

Criminal defence lawyer Daniel Brown said the proposal should have been considered a nonstarter from the beginning. He pointed to a 1990 Supreme Court ruling that found the state could not engage in “surreptitious electronic surveillance” without violating the Charter.

ShotSpotter Inc.'s privacy policy notes that the microphones only record two seconds before and four seconds after a gunshot is detected, but it acknowledges that a human voice has on rare occasion been taped in cases where someone was yelling loudly before or after a gunshot. In the United States, ShotSpotter recordings have been used twice to prosecute subjects in shooting cases – raising concerns about audio (obtained without a warrant) being used as evidence.

The chief executive officer of Newark, Calif.-based ShotSpotter, Ralph Clark, said his company had held discussions with Toronto Police since last summer. He said the company had not spoken with the Attorney-General’s office, but would welcome a future conversation in the hopes of making the case that the technology does not pose a privacy risk.

Ministry of the Attorney-General spokesperson Brian Gray said Thursday that the ministry would not comment any legal advice it provided to police, as the information is privileged and confidential.

Toronto Mayor John Tory, who had championed the software last summer, said Thursday that his support for ShotSpotter was always contingent on a review of any privacy or other legal issues.

“None of these things were held out as being a magic answer to gun violence in the city,” Mr. Tory said on Thursday. “It was one more tool that might have been helpful.”

According to city officials, Toronto applied for $32-million in federal grants for community-based programs meant to counter gang violence in the wake of last summer’s shootings, but the city has so far only received about $6.67-million. Mr. Tory said he has been assured personally by federal cabinet ministers that more cash is on its way from Ottawa to help the city cope with gun violence. The province has also committed an extra $18-million over four years to Toronto Police.

Toronto suffered a record 96 killings last year. So far in 2019, the city has seen eight homicides. The most recent was recorded on Wednesday night, after a man was found with gunshot wounds outside a townhouse complex in the city’s northwest.

Toronto police has not said what avenues or resources it will be pursuing in lieu of ShotSpotter. The service had also proposed doubling the number of CCTV cameras in Toronto, although it has not secured funding for that initiative. 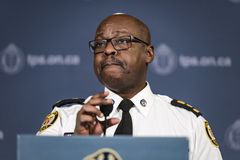 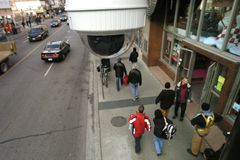 Follow Jeff Gray and Molly Hayes on Twitter @jeffreybgray @MollyHayes
Report an error Editorial code of conduct
Due to technical reasons, we have temporarily removed commenting from our articles. We hope to have this fixed soon. Thank you for your patience. If you are looking to give feedback on our new site, please send it along to feedback@globeandmail.com. If you want to write a letter to the editor, please forward to letters@globeandmail.com.
Comments