Hailey Dobbins sits at the periphery of the dance floor, her feet tapping a beat as she watches her fellow prom goers move to the music.

Ms. Dobbins, 17, is no wallflower and this is no ordinary high-school prom. As the song segues into its chorus, Hailey’s older sister Courtney walks over and pulls her to the dance floor. They’re joined seconds later by other teens and a couple of soccer players from the Toronto Football Club.

“This is a big night for Hailey and really for all the kids here,” says Cheryl Boudreau, Ms. Dobbins’s mother. “To be able to just have fun and feel beautiful and carefree – that’s something that’s so important when you’re somewhat isolated and missing out on so much the rest of the year.”

Ms. Dobbins is among the roughly 40 teens who came to the Hospital for Sick Children in Toronto for Sick Kids prom night this past Friday – a once-a-year event the hospital has been hosting since 2009 for chronic and long-term patients between the ages of 15 and 18.

“We have some kids here who missed their prom because they were admitted the day before or right on the day of their prom, and there are kids here tonight who are patients right now,” says Carolynn Darrell, a SickKids child-life specialist who is part of the committee that helps put together the prom. “Through the prom, we are able to bring a milestone event in their lives in a way that makes them feel included and accepted.”

Having nurses on hand, including specialists who are chemotherapy-certified, makes it easier for prom goers and their parents to relax and enjoy the evening, says Ms. Darrell.

“The kids who might be too medically fragile to go to their own school proms are still able to come to ours,” she adds. “Prom is a coming-of-age experience, and we believe that providing opportunities for normal growth and development helps minimize the impact that hospitalization can have on development.”

For this year’s prom, the hospital’s rotunda was closed off with heavy black curtains and transformed into a dance club complete with a DJ, strobe light projector and photo booth.

Eighteen-year-old Carolyn Cowan, who has been a SickKids patient since doctors found a tumour in her brain 12 years ago, says going to prom at the hospital has allowed her to meet other teens who understand what it is like to spend much of your childhood in medical care.

Ms. Cowan, a member of the patients advisory group at SickKids, has gone through 14 operations and chemotherapy. At one point, she stayed at SickKids for as long as six months.

“Everyone who’s here tonight knows what it’s like to have your whole life wrapped around your medical treatments, and to have to go through all the tests and procedures,” says Ms. Cowan, who helped to shape this year’s 1990s prom theme. “It’s hard to find people at school who ‘get it,’ and I’m away so often that I miss those opportunities to make friends at school.”

It was during last year’s SickKids prom that she became fast friends with Jenn Wilton and Vanessa Williams, both 17 years old. This year Jenn “promposed” to her two friends with her rendition of the Ed Sheeran song, Perfect.

“I did get to go to my school’s prom but I have really low energy levels and a couple of friends had to sit with me, which made me feel like I was taking them away from their fun,” says Ms. Wilton. “Here, everyone understands if you have to stop and take a rest.”

Learning about other patients’ stories has been helpful, says Ms. Williams, who has been a SickKids patient since 2016.

“When I went to prom last year I got to meet another girl who has anxiety like I do, so it was neat that we could share our experiences,” she says. “I also got to hear other people’s stories – it made me feel I wasn’t alone.”

More than three years since he transitioned to adult care, Alex Salmon has returned to the hospital to donate his services as a sound mixer and entertainment producer. Born with spina bifida, Mr. Salmon became a SickKids patient when he was a year old and considers the hospital something of a second home.

He remembers the many prom nights he attended at SickKids as pivotal to his social life and career.

“I’m the kind of person who prefers working behind the scenes instead of being on the dance floor,” says Mr. Salmon, a Sheridan College student and owner of Skinnzy Entertainment, a music and entertainment production company. “During the proms, I was mainly helping out the DJ, doing things like picking the tracks while he got the crowd hyped up.”

The crowd at this year’s event needed little encouragement to hit the dance floor. Ms. Dobbins, for one, kept dancing through another song and stopped only to take a selfie with her sister and a Toronto FC player.

This is Ms. Dobbins’s third prom in two years, her mother points out. She went to last year’s SickKids prom – her first dance ever – which gave her the courage to go this year to her high-school prom.

“Her other sister’s boyfriend took her,” says Ms. Boudreau. “As a parent, I’m just so happy to see her experience not one but three proms.” 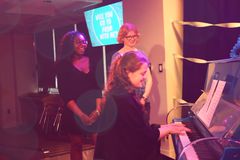