In Toronto, University Avenue could get an overhaul on a grand scale. The landscape architects PUBLIC WORK, the Michael Young Family Foundation and the non-profit Evergreen have a vision they call “University Park.” Their plan would convert 9.5 acres of asphalt into green space, creating a larger network that could be Toronto’s equivalent of La Rambla in Barcelona.

PUBLIC WORK’s proposal would stretch from Queen’s Park to City Hall, creating nine acres of park space that would connect to a larger 90-acre network. 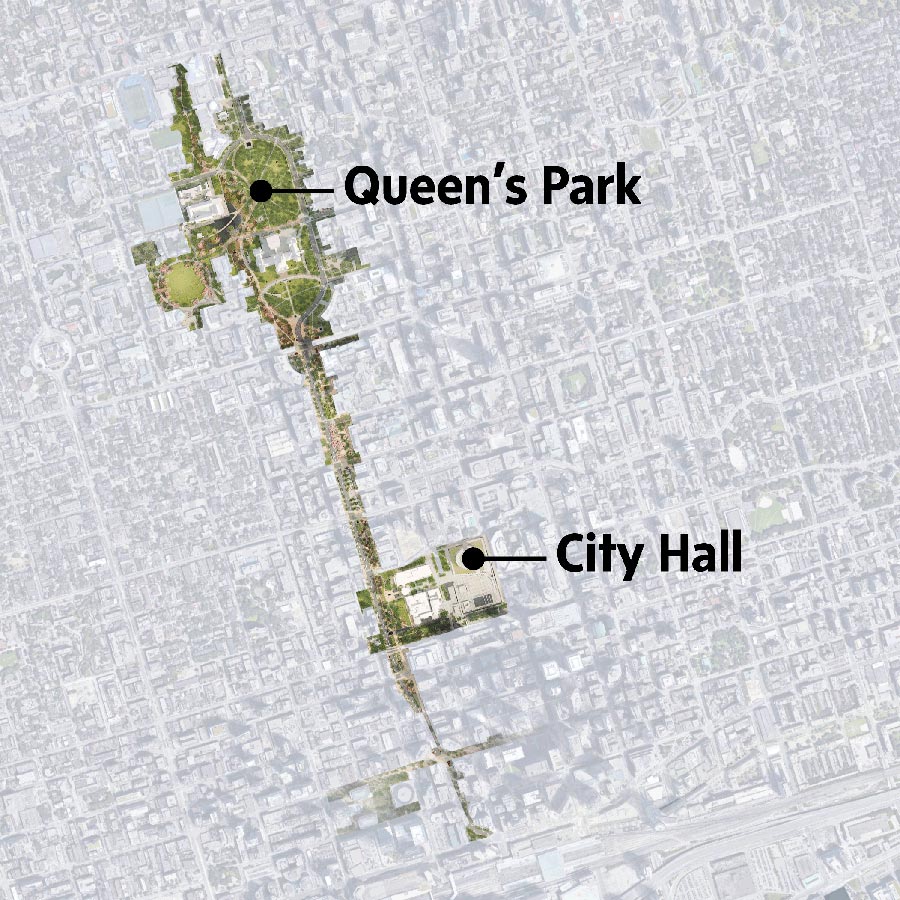 This would deliver huge benefits: green space to serve thousands of hospital workers and patients from neighbouring institutions; cycling infrastructure; and a place of great symbolic power. “Public space is more important than it’s ever been,” Adam Nicklin, a partner in the firm PUBLIC WORK, said. “And this is Ontario’s street. It’s Canada’s street. It could be the heart of the city.”

The proposal would create a strip of green all the way from Queen’s Park Crescent at Bloor Street, past the University of Toronto’s downtown campus and the provincial legislature, to City Hall. “With those nine acres,” said Nicklin, “it would knit together a continuous system of 90 acres."

How? By turning back the clock. In the 1940s and 1950s, University was reshaped to accommodate subways and a river of car traffic. Vehicle lanes were added; mature trees were destroyed. The University Park proposal – based on an idea PUBLIC WORK developed while working on the city’s 2018 downtown TOCore plan – basically reverses those changes.

It would keep the same traffic flow that exists now, following the installation of bike lanes earlier this year: four lanes of car traffic and two bike lanes. But all vehicles would end up on the west side in a two-way street. The other half of the avenue, which Nicklin calls “an underperforming civic asset," would become largely green space with bike lanes. The impact on vehicle traffic, according to a traffic study commissioned by the Young foundation, would be near zero. But the effect on the city could be enormous.

PUBLIC WORK says the project would be relatively simple to construct. They estimate it could be achieved within ten years for $230-million – about the cost of purchasing five downtown acres – and would be worth it. “Parks are central to the experience and the identity of a city," Nicklin said. He is right. Such a large, continuous green space would become an instant landmark, serving local residents, workers, hospital visitors and eventually tourists.

Toronto currently lacks such a central public space. City Hall is imagining one with Rail Deck Park, which would be built over a rail corridor near Union Station. (PUBLIC WORK has been involved in planning it as well.) That’s a worthy idea, but it’s complex and expensive at an estimated $1.66-billion. University Park would complement Rail Deck, and it could be done much sooner.

It would also be a fitting response to the COVID-19 pandemic: it would improve on historic parks that already exist, making a gathering place that is greener, safer and entirely public. "The park creates a new mental map of the city,” said Marc Ryan. “Instead of having many separate pieces, you have one unified thing.” If we really are all in this together, this would be an excellent way to prove it.

Remaking streets around the world

Though the novel coronavirus has had profound social and economic effects on major cities, it has created relatively little physical change so far. But local governments have pursued a few specific types of change to support hospitality industries; reinforce cycling and walking; and create open space.