Ontario has issued its second moratorium on residential evictions during the COVID-19 pandemic, but critics say the wording of the emergency order has created more confusion and may leave some tenants vulnerable.

On Tuesday, Premier Doug Ford announced that the province would be suspending enforcement of residential eviction orders “so people can stay home safely.” The emergency stay-at-home order made public on Wednesday restricted which eviction orders could be enforced by sheriffs in Ontario. But in a press release issued Thursday the province clarified that an expedited order from a judge or from the Landlord and Tenant Board (LTB) could still be allowed in “urgent situations,” such as those involving illegal activity.

Tracy Heffernan, director of the Tenant Duty Counsel Program, which provides free legal advice to tenants at the LTB, said the emergency order doesn’t make clear whether the Residential Tenancies Act criteria for expedited evictions are the only ones that apply.

The act allows expedited evictions in the event of conditions of “impaired safety” or criminal charges related to the manufacture or trafficking of illicit drugs. But Ms. Heffernan says nothing in the emergency order stops an LTB adjudicator from deciding other conditions might also be urgent. “It looks like a wide-open discretion,” she said.

Suze Morrison, the NDP tenants’ rights critic, has pushed to ban evictions, but says the order is not sufficient on its own.

“There’s certainly a lot of gaps in terms of what the government has proposed,” she said. “We’re not just seeing this with the eviction orders but with all the emergency orders, folks are left holding up their hands saying ‘What does this mean?’”

The Premier has said the new stay-at-home order – which has 29 exemptions that include trips for food, medicine, work and, in some cases, for non-essential curbside pickups – will last until at least Feb. 11. Emergency orders such as the moratorium on evictions usually expire in 14 days, but Municipal Affairs and Housing Minister Steve Clark said Thursday the moratorium would last for the duration of the stay-at-home order.

“Allowing for eviction enforcement in urgent situations, such as for illegal activity, is just common sense,” said Tony Irwin, president of the Federation of Rental-Housing Providers of Ontario, an industry lobby group representing some of the largest landlords in the province. “As the minister indicated, tenants who can pay their rent must continue to do so, and I would encourage any tenants whose circumstances have changed to speak with their landlord.”

Mr. Clark also said the LTB will continue to hold digital eviction hearings throughout the moratorium on enforcement. The digital hearings, which have processed more than 14,000 eviction applications since the LTB reopened last fall, have been condemned by tenant activists as being focused on speed and not on ensuring access to justice.

Prior to the moratorium, small- and medium-sized landlords critical of delays in hearings at the LTB circulated a petition that collected 2,000 signatures demanding no new eviction bans.

“I’ve had tenants who stopped paying me in December [of 2019]. It took five months to get a hearing date, and then was postponed by COVID. I got them out in November, they still owe me $10,000 in rent,” said Alex Pulcini, who opposes the ban and owns about 50 apartment units in the St. Catharines area.

Housing advocates worry that many evicted tenants may still end up homeless even if the sheriff is banned from carrying out eviction orders in most cases.

“The bigger issue is the vast majority of evictions are informal; people get a notice and they end up moving,” said Geordie Dent, executive director at the Federation of Metro Tenants’ Associations. “At the best of times it’s a terrible policy failure; during a global pandemic, it’s going to kill more people. We’ve got tent communities in every major park in Ontario.” 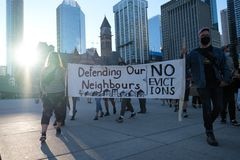 Opinion
We must act now to avoid an eviction crisis
August 23, 2020 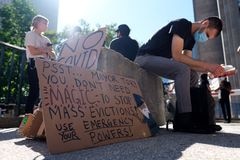