The Toronto Blue Jays put a lot of greenhouse gases into the air. Like all professional sports teams, they travel constantly for half the year and often by plane. This is the sort of thing we usually think about when we talk about our impact on the climate.

But forget all those flights. There’s a much bigger environmental concern on the horizon: the proposed teardown of the Rogers Centre, the team’s stadium. “From a climate perspective, it’s criminal,” Canadian architect Kelly Doran says. “That building has 55,000 tonnes of carbon baked into it,.”

Creating the building’s 137,000 cubic metres of concrete and 7,000 tonnes of steel generated large volumes of carbon dioxide in the atmosphere – “and all those emissions are already out there.”

So why waste them? This is the question that Mr. Doran, an architect who works in London with the non-profit MASS Design Group, is asking the entire real estate and construction industry. Mr. Doran aims to preserve the “embodied energy” in large buildings from being lost to demolition. Especially in Toronto, where there will be more of these felled in the coming decades, including two office towers as part of the proposed Canada Square redevelopment.

But he and other professionals are also arguing for policies that recognize the huge climate impact of new buildings. The built environment accounts for about 40 per cent of global emissions; the construction of new buildings alone makes up 11 per cent of the total. The latter is an area in which the City of Vancouver is already taking action. Applying a carbon analysis has the potential to change many things about the way we build our cities and towns.

The subject of “embodied energy” – which means all the energy it takes to make, transport and install the components of the building – has not been a major focus in climate policy discussions. But the Paris Accord, to which Canada is a signatory, calls for greenhouse gases to be reduced 30 per cent compared with 2005 levels by 2030. Mr. Doran, and other architects concerned with climate action, say this can’t be done without dramatic changes to current patterns of development and construction.

The issue is that construction is energy-intensive, and there are huge quantities of building happening across the world. “Think about the place where you live,” Mr. Doran said recently during a Zoom call from his family’s London apartment. “Now imagine it was being built again. How would you cut its carbon by half?” There are a few solutions. A smaller building. Reuse of an existing structure. And a lighter use of carbon-intensive materials, especially concrete.

Mr. Doran recently taught a studio on the subject at the University of Toronto’s architecture school (at which I was a guest critic). Students analyzed a set of new residential buildings in Toronto, and found that wood-framed three- and four-storey apartment buildings – sold as “stacked townhouses” – had on average about half the embodied emissions per square metre of bigger buildings. Why? The smaller building’s structure is made of wood, which actually stores carbon in place. Larger apartment or condo buildings, on the other hand, generally use concrete, the most carbon-intensive of building materials.

This sort of analysis is not usually done by government in Toronto or anywhere else – except Vancouver. That city already requires builders to analyze the carbon that goes into their new structures. As part of its Climate Emergency Action Plan, the city is now pushing for those emissions to be reduced by 40 per cent over 10 years.

About 180,000 tonnes of emissions each year in Vancouver come from new construction, about five per cent of the city’s total emissions, said Patrick Enright, a senior green building engineer with Vancouver’s Planning, Urban Design & Sustainability department.

“There is no single silver bullet to solving this issue,” Mr. Enright said, “but there are a lot of exciting opportunities to explore different tools.” Point one: Build with less carbon-intensive materials. Over the next four years, the city plans to establish special exceptions so that buildings of “mass timber” – engineered wood products that can do heavy structural work – are easier to build. Another is to encourage concrete that is made in a less carbon-intensive manner.

Point two: Reduce parking. Cities, including Vancouver, typically require new buildings to provide parking. This often goes underground. The city’s planning department will analyze this with a climate lens, “which should allow us to significantly reduce the amount of materials we use,” Mr. Enright explained.

Point three: Reuse. Don’t tear down buildings, especially large ones, if it is possible to retain them in part. The Rogers Centre is a visible example. There are commercial reasons why its owners want to tear it down. But after barely three decades, should those reasons be allowed to take precedence, leading to a redevelopment that is heavy with concrete? Similar questions could be asked of more typical building projects. Should it become harder and more expensive to tear down a house, only to replace it with another house?

Mr. Doran is suggesting to the City of Toronto that it adopt embodied energy policies as well. This kind of policy lens, applied holistically, would go far beyond the design of a building and would reshape land-use planning. For example, Vancouver officials are considering how the new comprehensive city plan could “build lower-carbon neighbourhoods.” Creating “walkable, complete neighbourhoods” is one of the objectives, leading to shorter trips. This is laudable.

But what about the buildings themselves? What does low-carbon planning look like? Mr. Doran is emphatic: “For cities, I think the future has to be high-density low-rise.” Current North American land-use policies encourage development to cluster in a few places, in large buildings.

The alternative is to spread out the growth in more buildings, made primarily with wood, in the scale of development that’s known as the missing middle. “From a carbon perspective, it’s much better to have a much lower, flatter, lighter-weight architecture,” Mr. Doran says.

This would mean opening up Vancouver’s – or Toronto’s – house neighbourhoods to new development, something that has proved deeply contentious and difficult in recent years. Reducing parking requirements is also likely to anger some people.

But, Mr. Doran says, there’s little choice. “Just where we are choosing to build is incredibly carbon-intensive. The way we’re building has to be completely rethought.”

He suggests that the demolition of the Rogers Centre – or an office building – should not be easy or make economical sense. Demolishing houses to build wood-frame low-rise apartments should become easy and legal.

“After all,” Mr. Doran said, “we only have one planet. We are essentially talking about the end of the world. Do we want to be arguing about zoning? Or parking?” 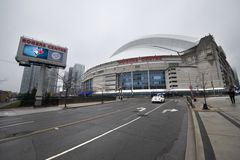 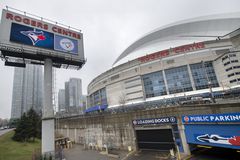