The City of Toronto will begin removing the possessions of those living in encampments on city property if they don’t adhere to eviction notices, but some say they have no intention of leaving.

Benjamin Boucher lives under the Spadina Avenue overpass on Toronto’s Lake Shore Boulevard in a structure made mostly from blankets and sleeping bags. “I like being able to know where I keep my stuff," he said. “I can go out without having to take everything I own."

Mr. Boucher has not received an eviction notice, but he said he has no plans to leave if he receives one.

The city has given out eight notices since last week, telling those camping on city property that they have 14 days to vacate, according to Brad Ross, the city’s chief communications officer. This comes as the city issued an extreme cold-weather alert for Wednesday night, its third this season. City shelters and respite centres were already at 93-per-cent capacity, despite the city’s target of staying under 90 per cent.

“The objective is getting people the supports and shelters that they need to be safe and recognizing at the same time that you can’t camp on city property,” Mr. Ross said, adding that there are many encampments encroaching on rights of way, such as sidewalks and roadways.

However, some of the people living in the targeted tents aren’t looking to move.

“In shelters, people steal from you,” said Dave, who asked that The Globe and Mail not use his last name because he hasn’t told his family he’s homeless. “Shelters are garbage. They’re gross. They don’t get cleaned properly.”

Dave said he used to go to a shelter, but the conditions were unbearable. Now, he lives in a makeshift home made of metal fences, donated by local construction workers, and tarps. It sits right underneath the Gardiner Expressway, and is surrounded by garbage. He said he received a notice from the city in December telling him to leave within 14 days, but no one has returned to enforce it.

Homelessness activist and street nurse Cathy Crowe said the evictions will only land those living in encampments in more dangerous situations, not help them into shelters and housing.

"There’s nowhere for people to go. The city shelter system is pretty full,” she said, adding that evictions often cause those experiencing homelessness to go deeper into hiding, making it more difficult for them to access support services.

“Usually people that are squatting outside are doing it very purposefully, because they can’t stand the conditions elsewhere,” Ms. Crowe said.

Between Jan. 1, 2017 and June 30, 2018, 145 people experiencing homelessness died in Toronto, partially because of abnormally cold temperatures, according to a report from the city. In order to prevent a reoccurrence this winter, the city announced it would add three new semi-permanent respite centres. These centres house 100 beds, and they are extremely crowded. One of the new locations is currently operating while the other two are set to open later this season.

City councillor Joe Cressy said the city is working toward an improved shelter model with only 40-60 beds to reduce crowding, as well as health, employment and housing services, so that those living in these encampments can receive proper shelter and support. He said the city is on track to add 1,000 new beds by 2020. He also said that while the city must focus on providing shelter to those in need, the real goal is to end homelessness altogether. "We need a shelter and housing model that provides an entrance in, but a pathway out,” Mr. Cressy said.

Mr. Boucher, meanwhile, said he prefers living under the Gardiner because he worries less about his safety than in a shelter. “I sleep better here,” he said, “I’m less stressed.” While he lives in his encampment alone, he said he knows many others that live in structures near him, which provides him with a sense of community.

He also said he doesn’t know where he’d go if he was forced out, but under no circumstances would he go to a shelter. “I have a really difficult time with them,” he said. “I don’t feel safe inside.”

Steve Phillips has been living under the Gardiner near Jarvis Street for two and a half weeks now, and he doesn’t believe the city will enforce the eviction notices. He has not received one.

Mr. Phillips said he is protected from the wind under the Gardiner, and that he feels safer there than in a shelter or on the street. “People are out here because of a lack of options,” he said. “There need to be more options. Right now, I have nowhere else to go." 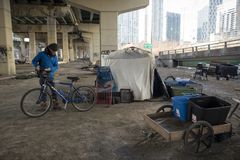 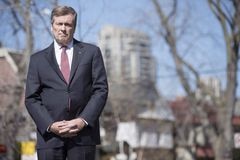