A synthetic opioid linked to overdose deaths around the world has been found for the first time in Ontario, police warn, highlighting the evolving nature of the crisis.

In late December, Toronto police announced that officers had found a white powder during an unrelated search of a west-end Toronto home two months earlier. A sample was forwarded to a Health Canada drug analysis lab, where it was identified as a new synthetic opioid called U-48800.

Health Canada has previously identified the drug just six times in Canada, for the first time last February and never further east than Saskatchewan. “[Drug dealers] use it either to stretch the other opioids or they just use it to basically make money,” Toronto police spokeswoman Allyson Douglas-Cook said.

Opioids killed more than 2,000 people in Canada from January to June this year; fentanyl and its analogs contributed to more than 70 per cent of those deaths, according to data from the Public Health Agency of Canada and the Canadian Institute for Health Information.

The drug seized in Toronto is not fentanyl but it produces similar effects, said Keith Graves, a drug-recognition expert instructor and retired police sergeant, who worked narcotics cases and street-level drug crimes in the San Francisco Bay Area. “They all cause the same signs and symptoms”: constricted pupils, lethargy and the risk of overdose.

The drug’s full name is U-48800 (2-(2,4-dichlorophenyl)-N-(2-(dimethylamino)cyclohexyl)-N-methylacetamide). It has been confirmed in three samples sent to Health Canada from law enforcement agencies in Alberta, two from British Columbia and one from Saskatchewan. It does not have any legal uses in Canada, according to Health Canada spokesman Eric Morrissette.

Nor is it controlled in this country. That means police officers in Canada can’t charge people under the Controlled Drugs and Substances Act with possessing U-48800, unlike other synthetic opioids such as U-47700. The drugs are different enough that U-48800 is not considered an analog of U-47700 in Canada, although a U.S. government probe recently uncovered evidence of one being sold as a substitute for the other. The Senate Homeland Security and Governmental Affairs investigations subcommittee was studying vulnerabilities in the international mail system to learn how Americans could purchase drugs from online sellers based in China.

U-47700 was put on China’s list of controlled substances last summer, the probe’s January, 2018, report said. Just days before, the investigations subcommittee found an online seller advertising a “hot sale” on its remaining U-47700. The subcommittee was in communication with the seller – posing as a first-time buyer – and in October learned that U-47700 had been discontinued. They were offered an order of U-48800 instead.

Restricting U-47700 not only led to the creation of U-48800, Mr. Graves said, but also the drugs U-49900 and U-50488. “All they’re doing is they’re just changing a little bit of the chemical structure of it to get around our laws," he said. "It’s being manufactured in China, people are buying it through the dark web and having it shipped to their house.”

Toronto police are warning the public to use “extreme caution” if they come into contact with any unknown substances – specifically, any white powder they know or believe to be an opioid.

Mr. Graves pointed out that even regular drug users can be caught unaware of the proper dosage when using a new, synthetic substance. “Or they might go online to figure out what a dosage unit is, and that source could be wrong,” he warned. "And they could end up overdosing.” 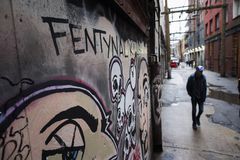 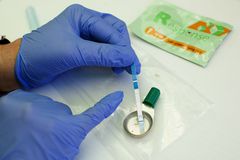 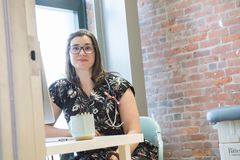