The Don Valley is famous for having a parkway. But it ought to be known as a park.

That is the challenge and the opportunity facing Toronto right now. Four planning efforts are under way that would affect the valley’s ecology and its public access. They could combine into a great public asset, one of the most special places in the city.

That is, if there is the political will at city hall to seize the chance and not let it disappear.

The Don Valley is a remarkable place. It is important to the Mississaugas and other Indigenous peoples; it’s a sensitive ecosystem.

But the Don has been a dumping ground for 100 years. Right now, it’s got two rail lines, electric and gas lines, and a sprawling thicket of roads. It’s remarkably beautiful, and more than 480 acres are owned by the city. But getting down to the valley floor, much less the river, is dangerous and unpleasant. You have to dodge snarling traffic, maybe climb a fence and try not to get lost.

There’s been progress, but too slowly. A decade ago, the non-profit Evergreen reopened the Brick Works on the Bayview Avenue extension as a cultural centre and event space. In 2013, the city commissioned a master plan for the nearby Don Valley Trail from the landscape architects and planners DTAH. And in 2015, Evergreen played host to an event to envisage how the valley could become a continuous park.

This week, Toronto City Council adopted an updated version of its ravine strategy, meant to clean up fragile ecosystems including the Don before they’re choked by invasive trees and knotweed. Such restoration would fit well with a certain kind of park.

And the city is now studying the potential to see the valley as a place for Indigenous ceremonies, education and art. This could give the valley an identity as Wonscotonach, its (probable) name in Anishinaabemowin.

Despite all this new thinking, the lower Don Valley has changed very modestly – a pedestrian and cycle bridge, an underpass, some signage. Now the 2013 plan is being “refreshed.” Brent Raymond, a landscape architect with DTAH, explains that this is a big-picture exercise. “The [2013] plan was very technical and project-driven,” he says, “then the Evergreen effort was very ambitious, calling for all sorts of big infrastructure moves. It was hard for people to imagine how it would ever happen.

“Now, the refresh brings the sensibilities of those two together.”

But why not be bold?

The biggest possibility is what’s dubbed Snowdrop Park. Down in the middle of the valley is an open field where city works trucks, for years, dumped dirty snow from the streets. Next door is an active works yard. The “refresh” plan calls for the snow dump site to become an open, naturalized space, connected to a series of trails and underpass. It won’t be soccer fields. But it could be a place for gathering, for public art, for outdoor education, all within walking distance of some very dense neighbourhoods.

Nearby is the Brick Works. This former brick-manufacturing facility, now managed and leased by the non-profit Evergreen, is the biggest attraction in the valley right now. Its Saturday farmer’s market is immensely popular. Evergreen is making it a gathering place for progressive urbanism. What else could it be? The organization recently held an event to explore the possibilities, led by a capable team of LGA Architectural Partners, landscape architects from Plant Architect and planners from Process.

I was there on Thursday for a freewheeling discussion of the possibilities. Should Brick Works also become a music venue? Should it build on current strengths in aboriginal culture and spirituality? Should it get another restaurant or café, where you can get a coffee for less than $2? There are many options on this sizable site – its front parking lot alone is larger than Yonge-Dundas Square in downtown Toronto.

On the other hand, it is also in a floodplain, on a site filled with contaminated soil. And getting here remains difficult – even if you’re coming from Todmorden Mills, a city museum and historic site just across the river.

The big problems in the valley have to do with programming (why would you want to come?) and with roads. The first one can be easily fixed. “There are many ways in which it could reach out to the city and serve citizens’ needs,” says Janna Levitt of LGA.

The second one is tougher. What’s really needed is to move some roads.

Bayview Avenue runs through the valley. It’s effectively a highway, one beloved by the good people of Leaside and Moore Park as a quick route into downtown. The speed limit was dropped to 50 kilometres an hour and then, in 2017, raised back to 60 when some of those folks complained to their councillors. I saw the signs had been changed even before the City Council vote happened. Drivers rule Toronto politics.

But a great park shouldn’t have highways running through it. The DTAH plan – and the city’s TOCore plan for downtown – envisage some change for the roads in the Don Valley. It’s not clear what, exactly. But if you see the valley from above, it’s clear the highway off-ramps and cloverleaf take up vast amounts of space. Bayview Avenue is much too wide.

All this could change. Those highway bridges and ramps will need to be replaced within a few years. City Council already directed city staff, in 2016, to think about alternatives. Can the city trade a bit of car infrastructure for green open space and a park that’s unique to Toronto? Yes. But will it?

Toronto's Don Valley Parkway fully reopened after being closed by flooding
January 12, 2018
A superpark hides in Toronto’s Don Valley, waiting to be discovered
April 15, 2016
Back split near Don Valley attracts many visitors
April 7, 2016 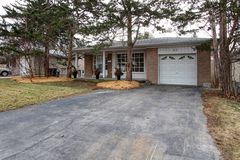