E-scooters are fun, but are they the future?

It’s a question bedevilling cities as they wonder how much to accommodate companies keen to popularize these zippy little vehicles.

At issue are not the electric Vespa-style machines dubbed e-bikes, nor the four-wheeled scooters used by people with mobility issues. E-scooters are essentially two-wheeled, narrow skateboards with a set of handlebars and a small motor, typically able to travel at 20 to 30 kilometres an hour.

Such scooters have popped up in dozens of cities. While some are owned by private users, local governments have been grappling with the effect of scooter rental companies that offer hundreds of the devices for short-term use. People pay a small fee for each ride and then leave the dockless scooter for the next person.

Canada has largely been watching from the wings as this trend developed, but that is set to change. Shared scooters are expected to appear as early as this month in Montreal. An Edmonton committee recommended on May 21 that council allow scooters, although the provincial government would still have to grant a legal exemption for the devices to be used. Ottawa council passed a motion in April calling for staff to “study the regulation of electric scooter sharing and parking,” should Queen’s Park permit these vehicles on the road.

The shared-scooter business model has attracted substantial investor backing for a few heavyweight companies. It’s produced many happy customers and predictions that the trend ultimately could lead to less urban traffic.

It has also sparked backlash in some cities. There are concerns about whether ubiquitous shared scooters would discourage walking. Critics say that scooters are dumped all over the place – blocking sidewalks and green space; that users endanger pedestrians; and that the device is risky to ride. And there are questions about whether these scooters, which have largely replaced dockless bike-share in the United States, are a fad that will be overtaken by something else.

In spite of this uncertainty, many policy-makers feel it is only a matter of time before shared e-scooters arrive in Canada in large numbers.

“They’re going to come one way or another,” Toronto Councillor Mike Layton said in April during a debate about the place of small vehicles in the city.

“Whether ... it’s a good thing or a bad thing – and how they store them and how they operate their regulatory regime – is a debate for another time.”

On a sunny weekday in southwestern Ontario, officials gathered in Waterloo to show off the shared scooters being tested in that community.

One hundred of these devices are set out each morning by the company Lime and retrieved for the night. It’s part of Waterloo’s attempt to alter how people get around the region, along with a light rail line shared with neighbouring communities, set to open this month, and a recently launched dockless bike-share system.

Accessed via an app, the scooters cost $1 to unlock. It’s another 30 cents for every minute of riding, meaning that the cost of a seven or eight minute rental is the same as a local transit fare.

There is no mandatory training before riding a scooter, but they are intuitive to use. Standing with one foot on the deck, you push off with the other and then use a toggle on the right side of the handlebars to accelerate. The brake is operated by the left hand.

It’s a nimble and responsive ride. According to the imperial speedometer, a test trip with a slight tailwind topped out at 17.1 miles an hour. That’s faster than many casual cyclists, although the small wheels transmit pavement irregularities much more harshly than does a bicycle.

Waterloo’s pilot project, which is restricted to certain areas, began in the fall. After a winter hiatus it resumed in April and will run through September. According to Lime, 73 per cent of users were male and 78 per cent were using the device for commuting. The average age of users was 23. Data released by the city show about 18,000 rides over 60 days last fall. Median trip length was 6 minutes and median distance was 750 metres. 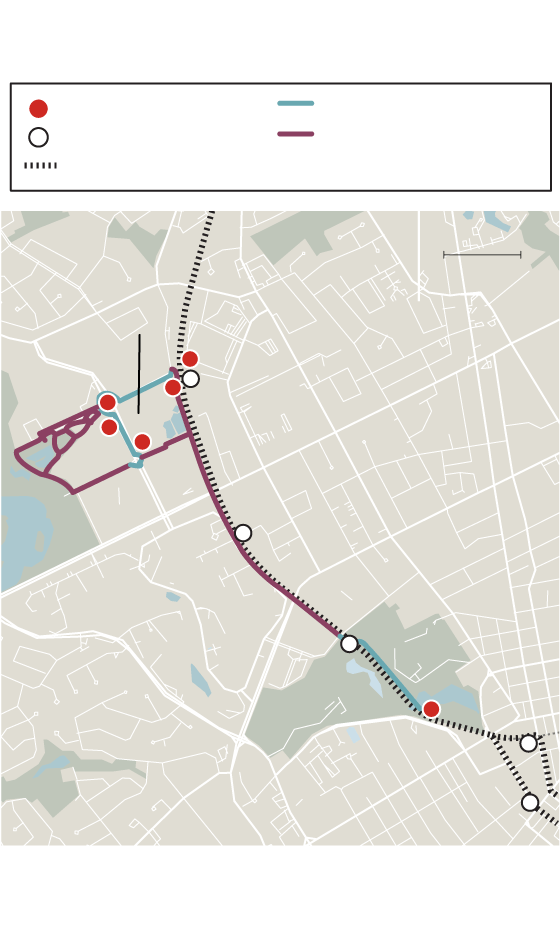 WHERE YOU CAN RIDE E-SCOOTERS 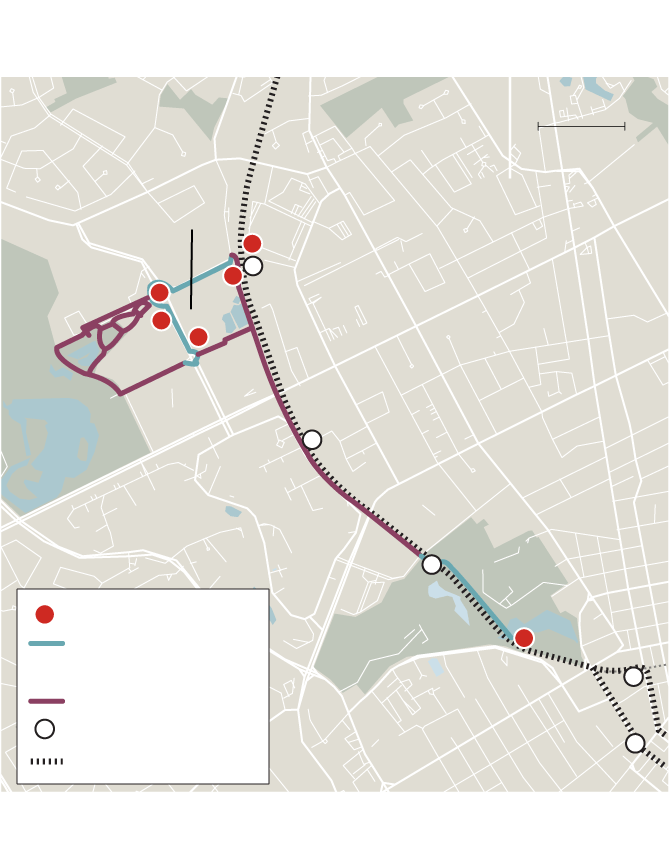 WHERE YOU CAN RIDE E-SCOOTERS

CARRIE COCKBURN / THE GLOBE AND MAIL, SOURCES: CITY OF 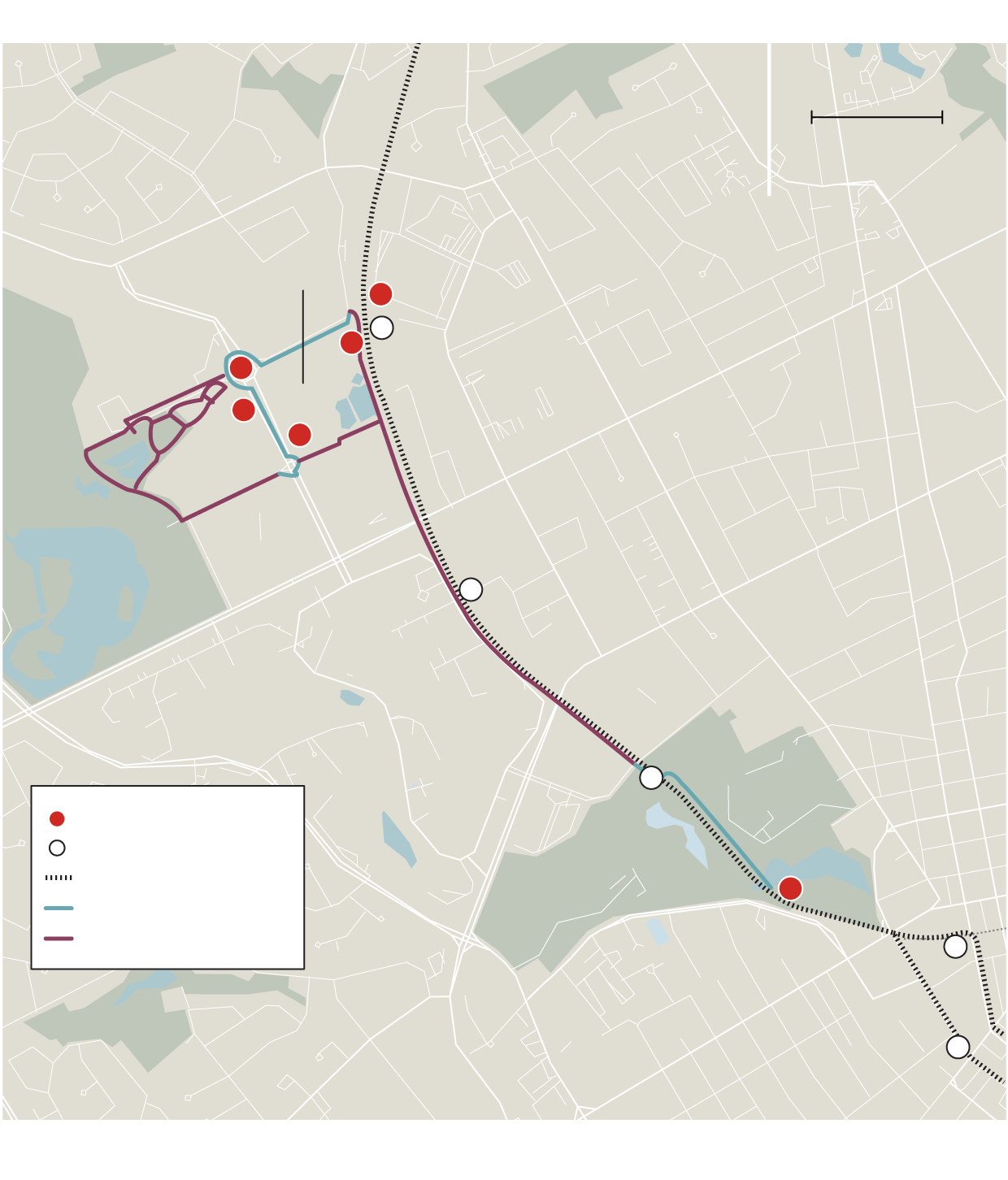 WHERE YOU CAN RIDE E-SCOOTERS IN WATERLOO

As part of the second phase of the pilot, Waterloo plans to study how scooter users would have made their journey had these devices not been an option. It’s a key question that ultimately could affect how cities view the devices. If scooters reduce auto traffic, they may be judged a net positive. But if they discourage walking, their benefits may be deemed less definitive.

A 2018 study done by the Portland Bureau of Transportation found that the largest group of scooter users – about 36 per cent – said they would have walked had one not been available for their last trip. But almost as many would have gone by personal car (19 per cent) or taxi (15 per cent).

In Waterloo, officials are hoping that, once the LRT is open, people who might otherwise have driven into the city will instead take transit and then hop a scooter for the last part of their journey.

Christopher Schafer, senior director of strategic development for Lime’s Canadian operations, said that the device is ideal for trips that are just a bit too long to walk. But he was also sanguine about the possibility that some pedestrians will switch to scooters.

“People are in a bike lane, taking a trip that otherwise may have been taken on foot. You know, to me that’s not a bad thing necessarily,” he said. “We’ve got various forms of e-transportation in those lanes, as well as bikes. So I view that as a positive for cities and for people getting in and around the city.”

For now, Waterloo’s scooters are still enough of a novelty to attract attention. When a group of users paused along the path, passerby Taylor Echlin stopped to inquire. The financial services professional at first had no interest in riding, explaining that he was out for the purpose of doing his afternoon walk. But after hearing more, he mused about perhaps incorporating them into an outing.

Although scooter traffic exists in a legal grey area in Ontario – they are approved for use on neither sidewalk nor road – they are already here, albeit in small numbers.

Torontonian Bojan Milosevic paid about $1,000 for his e-scooter on Amazon and says he’s never been ticketed. He relies on the scooter as a quick way to zip around downtown, avoiding parking charges.

“Around here it saves so much money, it pays for itself, honestly,” he said. “If I take the car, it’s $20 parking everywhere.”

The Ontario government announced this year that it would look at scooters as part of a regulatory overhaul. In Waterloo, where the devices are largely restricted to a mixed-use trail and private roads in an industrial park, city officials say that users have been fairly good about avoiding conflicts with the public.

“We were uncertain and are quite pleased with how it’s worked out,” said Ryan Mounsey, senior economic development adviser in Waterloo.

Scooter deployment has not been as smooth in all cities. A scooter program that kicked off this week in Hoboken, N.J., infuriated drivers, who claimed the riders blatantly break laws. One local media outlet called them “two-wheeled terrors.” In some cities, scooter opponents have lit the devices on fire, thrown them into the water or hung them from trees.

One of the most contentious points of discussion is where they should be ridden. In Toronto, where city staff are working on a regulatory framework for small vehicles, including e-scooters, there are calls to give them access to bicycle lanes.

“This opens up more practical ways for people to get around safely … it creates the context for wide bike lanes, high-quality bike lanes,” said Cycle Toronto chief executive Jared Kolb.

Depending on how much traction this new form of transportation has, the question of whether they belong on city streets could become moot.

Only a few years ago municipalities were scrambling to prepare for dockless bike-share systems, which were seen then as the future of short city trips. However, an April report from the National Association of City Transportation Officials says that these bikes, “which once numbered in the tens of thousands, have largely disappeared from city streets.”

These were replaced, NACTO says, by e-scooters. Which has raised the question in transportation circles: will something in turn replace scooters?

Lime’s Mr. Schafer argued that the bigger point is that cities have embarked on a groundbreaking shift in urban mobility, which he expects to continue even if the technology changes.

“That to me is a net positive,” he said. “Be it a e-bike, e-scooter or whatever tomorrow brings.”

That shift is unfolding slowly in Canada. While the companies behind these scooters have lobbied politicians and given them test rides, they have not distributed the devices en masse, as they did in some U.S. cities.

However, Barbara Gray, Toronto’s general manager of transportation services, said that coming late to the party can work to a city’s advantage.

“Where other cities have experimented and succeeded, let’s lean in in that direction,” she said. “And where they’ve seen these huge increases and then they’ve failed, certainly we don’t want to go down that path.”