Tanya Wilson was about to leave her tattoo shop late Sunday evening when two people barged in screaming something about a gun. She had heard gunshots but didn’t yet know what was happening outside her doors on Toronto’s Danforth Avenue, so she told the strangers to leave.

Then the business owner noticed blood pouring out of the man and woman’s legs and realized that they needed help. She locked the door and turned off the lights in case anyone was following them before leading the frantic pair down into her tattoo studio.

The mother and son who sought shelter in Ms. Wilson’s shop were two of 15 victims of a mass shooting along busy Danforth Avenue around 10 p.m. on Sunday. A 10-year-old girl and an 18-year-old woman were killed. The shooter, 29, was found dead after an exchange of gunfire with police but his cause of death is not yet known.

Inside her Skin Deep Tattoo Studio, Ms. Wilson tried phoning 911 but couldn’t get through amid the crush of calls. She tried calming the woman and man down as she grabbed gauze, gloves and other supplies to tend to their wounds.

“They just kept telling me to call 911 and everything was so intense that … we were all yelling back and forth at each other,” Ms. Wilson said. “I just kept saying like, ‘You’re okay, relax. It’s okay, relax. Relax, like, you’re fine. You’re going to be fine. Just relax, they’re coming’.”

The man, who Ms. Wilson believes is in his 20s, had been shot in the left calf and was bleeding profusely while his mother’s right knee appeared to have been grazed by a bullet. Ms. Wilson, who was with a friend who was also helping out, used a pair of leggings and a T-shirt as makeshift tourniquets but couldn’t tie them tightly enough.

After the gunshots stopped, Ms. Wilson ran outside and flagged down a policeman. The officer had a strap he used to tie off the man’s leg and told Ms. Wilson to find an extension cord that they used for the woman’s leg.

Paramedics eventually arrived and took over and transported the mother and son to hospital.

Ms. Wilson spent the night waiting outside her shop as police officers took samples and photographs as part of their investigation.

Asked if she felt she may have saved the pair’s lives, Ms. Wilson said quietly: “I don’t know, I don’t know,” later adding: “When I saw the situation and what was needed, then I just reacted.” 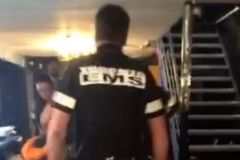