Toronto Mayor John Tory says his city needs urgent help from the federal and provincial governments to deal with a surge in refugee claimants, who now account for nearly 40 per cent of the people in the city’s strained shelter system.

Mr. Tory made his plea days after Quebec officials announced they would refuse to accept more refugee claimants into Montreal’s 1,850-bed refugee shelter network next week, as the system approaches 85-per-cent capacity – meaning even more asylum seekers are likely to head to Ontario and Toronto.

Over the past year, many refugee claimants from Haiti have crossed into Quebec from the United States, city officials say. In recent months, an increasing number of Nigerians are also said to be crossing the U.S.-Canada border and entering Quebec. The province has warned it expects to see as many as 400 claimants a day.

If the rapid growth continues – refugees made up just 11 per cent of Toronto’s shelter population in late 2016 – Toronto could be forced to enact an emergency plan that would see some of its community recreation centres closed and converted into temporary shelters, officials warn. The increase since 2017 is expected to cost the city an extra $64.5-million by the end of the year, if the pace keeps up.

According to city numbers, in late 2016, an average of 459 refugee claimants a night used a city shelter space, or about 11 per cent of the system. By April of this year, that number had jumped to 2,351 refugees in Toronto’s 6,800-bed system, or 37.5 per cent. And those numbers include the 1,700 beds, mostly in motels, that Toronto has recently added to try to deal with the influx.

The mayor, who helped a group sponsor a family of Syrian refugees, said he wanted to stress that Toronto supports helping those in need: “This is something that the people of Toronto I think believe very strongly, that we are a welcoming place. We are consistent supporters of Canada’s approach to immigration and to our moral responsibility to support refugees from around the world in their time of need.”

But Mr. Tory said the city has been making the case to Ottawa for some time that Toronto and other cities need “significant additional resources” to help pay for housing and services to help refugees settle here. And so far, he said, there has been no “meaningful co-ordinated response” from Ottawa.

At a news conference on Thursday flanked by several city councillors and the head of Toronto’s shelter system, the mayor called for a list of reforms, saying the city needs better co-ordination between governments to place new refugees in “regional locations” outside Toronto’s shelter system, as well as new dedicated staff and new funding. He also said the city wants to be reimbursed for all of its costs related to refugees from last year as well as this year.

A spokesman for federal Immigration Minister Ahmed Hussen said officials are aware of the stresses on Toronto’s shelters and have been in constant communication with Mr. Tory and other municipal and provincial officials as they work on a contingency plan.

But Toronto Liberal MP Adam Vaughan, a former city councillor, said Toronto itself needs to shoulder some of the blame for failing to do more to help its homeless population find permanent housing and reduce the stresses on the emergency shelter system.

“Additional resources are on the way – I just rather would see the city focus on housing people rather than sheltering them,” Mr. Vaughan said.

Ontario Premier Kathleen Wynne told reporters the province would work with city officials to see what could be done, including looking at more provincially owned buildings that could be turned into shelters. But she also called on Ottawa to do more: “We need all three levels of government to make sure that these people have a decent space to be in and that they get all the protections that they need.”

The mayor and senior city shelter staff faced sharp criticism this winter as shelter numbers swelled in a cold snap and the city was forced to open emergency respite centres. 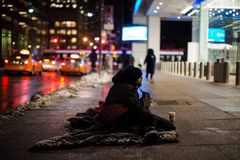 Federal decision to ease pressure of asylum seekers on Quebec raises concern at other destinations
April 20, 2018 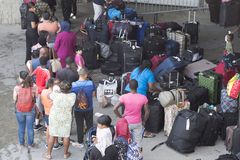 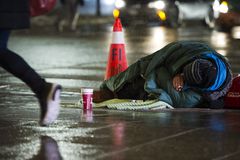