Led by Mayor John Tory, Toronto city council beat back an attempt to cut the police budget by at least 10 per cent next year and instead voted in support of body-worn cameras for officers and a study on different approaches to mental-health calls.

Monday’s debate, which took most of the first day of a marathon council meeting, comes against the backdrop of increasing protests in Canada and the United States over how police treat racialized communities. Councillors repeatedly acknowledged these concerns, but clashed on how best to respond.

Councillor Josh Matlow, whose proposal for the 10-per-cent cut to the budget of the Toronto Police Service was voted down, said this wasn’t the time for “tinkering.” Mr. Tory countered that such a cut, worth about $107-million, would be arbitrary and that the changes council approved, while not “the ultimate answer,” were a step along the way.

The mayor’s allies, as well as some of council’s progressive wing, lined up behind Mr. Tory’s proposals, which include seeking a report on creating a non-police response to some mental-health calls. The report would include information on how such a shift would reduce the need for police funding and would be presented to Mr. Tory’s executive committee in January, subsequent to the 2021 police budget having been drafted.

The call for body-worn cameras is phrased as a council request that the police services board direct the police to come up with a plan to outfit officers by the start of next year. The approximate cost would be $5-million a year, Chief Mark Saunders said.

Councillors also voted to get a line-by-line breakdown of the police budget, something it does not currently receive. And they supported asking the Auditor-General to examine the police budget for possible savings.

“It is meant to be a comprehensive series of reforms that set in motion a process that should bring about the kind of change, at the pace of change, that is needed in response to the people that have marched in the street and that have been in touch with us in our offices,” Mr. Tory said.

Mr. Matlow’s attempt to redirect police funding to anti-racism and social services was defeated 8-16 after several councillors raised concerns that such a reduction would harm community safety.

“[Racialized] communities are telling us, over year and year and year after year, that they want us to make changes, not tinkering, not slight reforms, but actually changing what community safety looks like in our city,” Mr. Matlow said.

Staff said that the vast majority of the police budget is dedicated to salaries and benefits, raising the prospect of major reductions in front-line officers if the budget was cut.

Spending on the police has risen steadily over a number of years. The police budget has gone up 19.4 per cent since 2013, city staff confirmed in response to a question from Councillor Gord Perks, who voted for the 10-per-cent cut.

Mr. Perks noted that city budgeting under Mr. Tory begins with a set figure, based on a property tax within the rate of inflation, with spending then massaged to fit that number.

“We’re prepared to use an arbitrary number to protect homeowners from property taxes but we’re not prepared to do it when the issue is anti-Black racism, anti-Indigenous racism and the effects of policing on racialized Torontonians,” the councillor said.

The debate took place amid protests against police behaviour. These have been most heated in the United States but have occurred as well in Canada, where protesters have drawn attention to police treatment of Black and Indigenous people.

In Toronto, activists have been seeking answers about the case of Regis Korchinski-Paquet. The 29-year-old Black woman fell to her death from a high-rise balcony after Toronto Police were called to her apartment. Family members say police were told she was in mental distress. The province’s Special Investigations Unit is probing the case.

Chief Saunders noted that mental health is a factor in a growing number of their calls, which he says tend to fall to police because others are not stepping up to handle them. 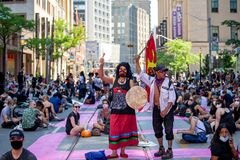 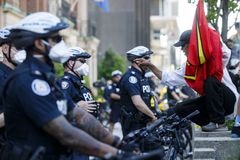 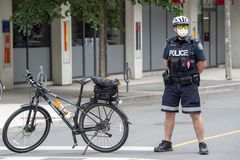