Toronto City Council has voted to start talks aimed at acquiring the mothballed waterfront Richard L. Hearn Generating Station to preserve it for public use, after provincially owned Ontario Power Generation sold the site to a private developer for $16-million last year.

City Councillor Paula Fletcher, whose ward includes the massive site, put forward a motion on Thursday calling on officials to “initiate negotiations on an expedited basis” to acquire the Hearn site at “market value, taking into consideration the environmental condition of the property and … recent transaction values.” The move, seconded by Mayor John Tory, passed 20-2.

Critics of last year’s sale decried the $16-million purchase price for such a prime piece of waterfront real estate when the deal was announced last November. Ms. Fletcher and Mr. Tory expressed concern at the time the city was not consulted on the move, which put a key site in the middle of the city’s redevelopment plans for the waterfront in private hands.

Ms. Fletcher says the Hearn site could be turned into a park with the power station adapted for some sort of public use.

“It’s a landmark building. It’s one of the most important buildings on the Toronto waterfront. It’s a world-class building,” she said in an interview. “It should be a public building, on our publicly planned new waterfront.”

Council also approved a motion from Ms. Fletcher asking city staff to begin the process of designating the long-dormant power station, which started generating power in 1951, as a heritage building. City officials are to report back in April to Mr. Tory’s executive committee on their acquisition talks and the terms of any proposed deal.

The owner of the site is a company called Studios of America, which has leased the site and used it as a film location since March, 2002.

The company is partly owned by prominent developer Mario Cortellucci, a long-time donor to the Ontario Progressive Conservative Party who gave $1,200 last year to Doug Ford’s PC leadership campaign. Mr. Cortellucci, who has not publicly announced his plans for the site, could not be reached for comment on Thursday.

The company’s lease on the Hearn site was not set to expire until 2041. Its terms, OPG says, gave the tenant the right to a first option to buy the property, which it began pursuing several years ago, under the previous Liberal provincial government. OPG has said the $16-million price was based on a 2016 independent appraisal of the 31-acre site, and that the low amount was partly due to soil contamination at the former coal-powered generator.

A sale to the city could be complicated by the conditions of the deal. According to OPG, the deal includes a condition that blocks any transfer of the property for three years. (It also prohibits any “residential or other sensitive uses” on the site for 15 years.) That suggests the city could be forced to consider expropriating the site, a process that would still see it pay a fair market value.

Etobicoke councillors Stephen Holyday and Michael Ford – the Premier’s nephew – were the only members to vote against acquiring the Hearn property. Before the vote, Mr. Holyday warned councillors to be cautious about buying and preserving the site, saying its massive smokestack affects flight paths in and out of Toronto’s island airport.

When the Premier was a Toronto city councillor, and his late brother Rob Ford was mayor, Doug Ford suggested the site as a future home of a National Football League stadium or a recreation complex with an ice rink. 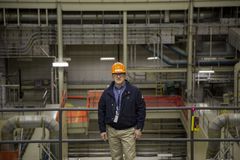 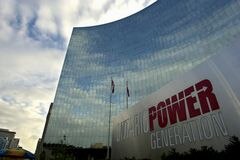