A police officer who fatally shot a distraught teenager on an empty Toronto streetcar more than six years ago has been granted full parole, with officials noting his progress reintegrating into society.

In a written decision released on Tuesday, the Parole Board of Canada said James Forcillo is a low risk for reoffending and has shown a high level of motivation and accountability while on day parole.

The two-member board panel said Mr. Forcillo, 37, no longer requires continuing psychological counselling, which had been a condition of his day parole. But it renewed a restriction barring him from contacting any of the victim’s relatives, in order to “prevent any further trauma” to the grieving family of Sammy Yatim.

“Your actions took the life of a much-loved son, brother and member of the community. His loss continues to devastate the family. You acknowledge the trauma that you have caused the victim’s family and that you continue to reflect upon the harm that your actions caused,” the panel wrote.

“With the benefit of counselling, you now understand that your own fear, impulsivity and stress contributed to your poor decision-making, poor problem-solving and resulted in fatal consequences. As a result, you are now more cautious of the impact of your decisions and are better able to consider the consequences of your actions.”

Mr. Forcillo was convicted in 2016 of attempted murder in the shooting of Mr. Yatim, who was 18. He was later convicted of perjury for claiming to be living with his ex-wife while on bail awaiting his appeal, when he had in fact moved in with his new fiancée. He was sentenced to a total of 6½ years behind bars for both offences.

The parole board panel said there was no indication Mr. Forcillo breached the conditions of his day parole since his release last summer, which it said was “reflective of an offender with high levels of motivation, accountability, and reintegration potential.”

The former officer’s attitude improved during his incarceration and he now shows “no immediate need” in that area, the panel wrote.

It also said Mr. Forcillo has taken steps to balance his work life and his responsibilities at home, something it said he struggled with in the time leading up to the shooting.

“As you are now aware that a balanced lifestyle is … necessary in ensuring your safe reintegration, you are focused on maintaining a healthy and balanced lifestyle. In particular, you spend your free time studying or attending the gym on campus,” it wrote, adding Mr. Forcillo has also maintained relationships with his children.

Mr. Forcillo is now enrolled in a full-time college program with the goal of becoming an electrician, the document said. “Your success and high marks demonstrate your motivation and commitment to your chosen field,” it said.

Mr. Forcillo was one of the first officers to arrive at the scene in the summer of 2013, after someone reported that a teen was exposing himself on the streetcar while brandishing a small knife. By then, Mr. Yatim was the only person left on the streetcar.

Mr. Forcillo was the only officer to open fire, firing three shots that caused Mr. Yatim to fall to the floor of the streetcar, followed by a second volley of six more shots. Another officer then tasered the teen.

A jury acquitted Mr. Forcillo in 2016 of second-degree murder in Mr. Yatim’s death, but convicted him of attempted murder in connection with the second volley, which came as Mr. Yatim was down and dying.

His lawyers appealed the conviction, arguing the first and second volleys the officer fired were artificially divided into discrete events. They also sought to challenge his initial six-year sentence, which was a year longer than the mandatory minimum.

Ontario’s highest court rejected the appeal and the Supreme Court of Canada declined to hear the case. 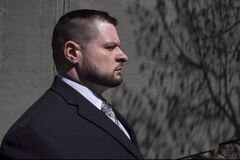