A second exploration of a site where alleged serial killer Bruce McArthur is accused of burying the bodies of numerous men yielded human remains on nearly every day of a nine-day search, Toronto police said Tuesday.

The excavation of the area in and around a central Toronto home where McArthur once worked as a landscaper wrapped on Friday, said police spokeswoman Meaghan Gray, noting that investigators have not yet determined if the remains found belong to more than one person, or if they’re dealing with a new alleged victim.

“Remains include everything right down to perhaps teeth or bone fragments,” Gray said, adding that identification efforts could take several weeks to complete.

Police had already conducted an extensive search of the residential property earlier this year, during which they uncovered the remains of seven of the eight men McArthur is accused of killing.

The men, who had ties to Toronto’s gay community, all vanished between 2010 and 2017 and their remains were discovered in planters McArthur is believed to have installed at the property as part of his landscaping work, police have said.

After completing the initial search of the property in the dead of winter, police indicated they planned to revisit the site in warmer conditions.

When they returned to the home earlier this month, cadaver dogs immediately alerted them to the presence of human remains. Gray said investigators continued to unearth remains on virtually every day of their second excavation of the property and surrounding area.

McArthur, 66, of Toronto, is alleged to have killed Majeed Kayhan, Selim Esen, Skandaraj Navaratnam, Andrew Kinsman, Dean Lisowick, Soroush Mahmudi, Abdulbasir Faizi and Kirushna Kanagaratnam. Police have said remains belonging to all but Kayhan have been found so far.

Police previously indicated that newly discovered remains at the property could belong to the eight alleged victims named so far.

But the sprawling investigation into McArthur involves probing unresolved missing persons reports as well as cold homicide cases dating back decades, and lead investigator Det. Sgt. Hank Idsinga has previously indicated that more murder charges could be a possibility.

“We’ve laid eight charges and we may at the end of the day only have eight victims,” Idsinga previously told the Canadian Press. “We just don’t know yet.”

Gray said investigators are working to identify the newly discovered remains using fingerprints, dental records or DNA testing depending on what method is most feasible. She said dental comparisons and DNA screening could take several weeks to complete if deemed necessary.

Police have searched about 100 properties linked to McArthur, but have only found body parts in and around the one home.

McArthur’s case is scheduled to return to court on July 23. 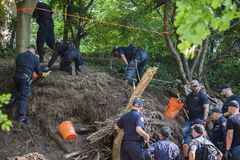 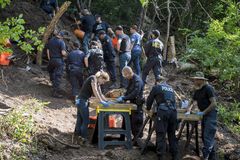