Enormous crowds filled downtown Toronto on Monday to cheer on their team as the city celebrated its first NBA Championship, and first major championship in more than 20 years – but the festivities were marred by several isolated incidents.

Hundreds of thousands of people lined the streets and packed Nathan Phillips Square next to City Hall to watch the Toronto Raptors hoist the Larry O’Brien trophy after winning the Finals last week. But amid the chaos of the crowds were violent injuries, transit station shutdowns and lengthy delays.

The city of Toronto estimated that 100,000 people attended the celebration at or near Nathan Phillips square with more than one million people attending the festivities throughout the city.

But authorities had estimated Sunday that close to two million people would show up to watch the parade.

Stephen Doig, a professor at Arizona State University and an expert on crowd​-size estimation, looked at aerial photos of the crowds and estimated the number was likely 600,000 at the most.

“You are safe to say ‘hundreds of thousands’ came out to see the parade. That’s a fabulous crowd, and a great credit to the Raptors and their fans. But saying 'two million’ is, frankly, ridiculous," he said.

For context, the total population of Toronto is 2.9 million people. The Greater Toronto Area is home to 5.9 million, according to 2016 census numbers.

Police and paramedics had to contend with several incidents on Monday, including a shooting in which at least four people were injured and three people were arrested.

A fight also broke out nearby at the Eaton Centre, where police said three people were reported stabbed.

The Raptors’ bus was supposed to leave Exhibition Place at 10 a.m. on Monday, making its way four kilometres through streets thronged with fans, but the sheer size of the crowd delayed the convoy.

Traffic ground to a standstill on a nearby thoroughfare as the parade went by. Some motorists left their vehicles to peer at the activity.

The celebration that was supposed to start in Nathan Phillips Square at 12:30 p.m. was delayed almost three hours.

Some in the square appeared to grow impatient, chanting “bring the parade!” Later, several chanted that they wanted water and members of the Raptors dance crew shuttled cups to parched fans pressed against a fence.

Yonge-Dundas Square, about three blocks away, was set up as an alternative viewing area for the ceremony, with thousands watching there on the big screen.

Public transit was overloaded downtown on Monday. The Toronto Transit Commission (TTC) said three subway stations were closed owing to the volume of the crowd above ground. Trains were bypassing Dundas, Osgoode and Queen stations without stopping.

“There’s obviously a huge concentration of people along Queen Street and we’re not picking up or dropping off in that area. We don’t want to contribute to the overcrowding,” said Hayley Waldman, spokeswoman for the TTC.

The TTC also cut power to streetcar lines early on Monday because fans were climbing close to live wires.

“Millions of people downtown will need to get home. Please be patient and courteous,” the messages read.

Toronto’s paramedic services set up a first-aid post on Bay Street north of City Hall. Kim McKinnon, a spokeswoman for the Toronto Paramedic Services, said by mid-afternoon, 10 people had been transported to hospital from the crowd. She said it was important for attendees to stay hydrated.

The masses proved too much for some, who were helped over a barricade by police at Nathan Phillips Square to escape the crush. At one point, officers pulled a semi-conscious child over the barrier and onto a stretcher. 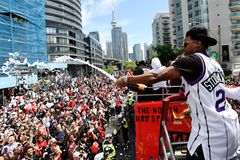 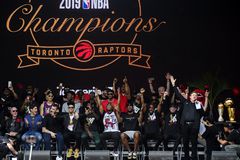 Some organizations offered time off so employees could attend Raptors parade
June 17, 2019 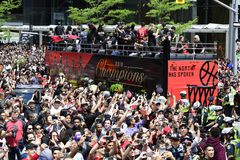 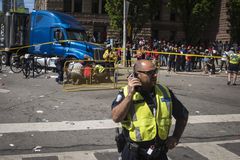