Toronto schools in communities hardest hit by COVID-19 will have kindergarten classes with no more than 15 children and other elementary grades capped at 20 students.

Trustees at the Toronto District School Board voted to direct teaching resources to certain areas of the city to keep class sizes smaller and maintain physical distancing. Earlier this week, Toronto Public Health identified more than 70 schools in hard-hit areas in the northwest corner of the city, Scarborough and the downtown core.

Junior and senior kindergarten classes outside of COVID-19 hot spots could have as many as 26 children in a single space. In those schools, classes between grades 1 and 3 will be capped at 20, while those between grades 4 and 8 will have a maximum of 27.

Toronto Public Health is refining its list of high-priority schools by relying on factors such as student count and community transmission levels, relying “on the most recent [COVID-19] case counts, not from January, but from the end of May to now,” TDSB executive superintendent Andrew Gold said at a board meeting Thursday.

The board plans to survey parents again next week on whether they plan to send their children back to school or have them learn remotely. The board has to redo its survey after its initial proposal to reopen schools was scuttled by the provincial government late last week.

“Let’s be very clear that this is not the same survey as before,” said Kathy Witherow, the board’s associate director of leadership, learning and school improvement. “We need people to complete it [again].”

The new elementary school plan provides students with full instructional days. It will cost the board $38.7-million, including $29.5-million from its reserve fund. The total funds will help hire or redeploy 766 teachers in high-priority elementary schools to create smaller classes.

Staff also said they were planning to delay the back-to-school start until Sept. 15, and to stagger the first days of classes from that date. They will report back to the board with a finalized schedule next week.

Jennifer Klein, a teacher-librarian and special education teacher at The Elms Junior Middle School in Toronto’s Etobicoke area, said the move “is definitely a step in the right direction.”

Kindergarten classes at her school sometimes have up to 29 children, while junior and intermediate classes can reach up to 33. The Elms is located in one of Toronto Public Health’s high-priority areas.

“[Capping class sizes] is not the only thing we need to do, but it’s one piece of the puzzle,” Ms. Klein said. “I’m happy they’re at least making an attempt to try it in the higher needs areas.”

The TDSB was among many large Ontario boards that also had to rework their high-school timetables late last week, after the Ministry of Education said students needed to be in their classrooms at least 50 per cent of their days.

The TDSB had originally planned to have students in classrooms about 25 per cent of the time, but has since shifted gears to nearly 40 per cent.

At a press conference Thursday, Ontario Premier Doug Ford announced the hiring of 200 Ontario Provincial Police officers. When asked why the province was hiring police officers instead of teachers, he said he didn’t ”like the idea of comparing apples and oranges.”

“Every board is responsible to hire their teachers,” Mr. Ford said, adding that the boards had access to their reserves. 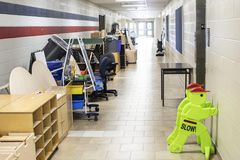