Toronto’s sewage system may be over capacity even when skies are clear, a new report released Wednesday suggests. The revelation comes amid a multibillion-dollar city project to fortify its aging sewage systems against heavy storms.

The Toronto Harbour Monitoring Report is the result of twice-weekly water tests along the harbour, conducted by Lake Ontario Waterkeeper from June to August this year. The report documents “extremely high” levels of the bacteria E. coli and sewage debris in Toronto waters, and cites the city for not issuing a “detailed public advisory” after a sewage spill that they say had prolonged effects – leaving dead rats, fish and birds floating in the harbour for several days afterward.

The nine sites monitored over the summer failed to meet a set standard for E. coli levels in 44 per cent of tests. One site at Bathurst Quay, at the waterfront near Fort York, failed every time, the report says. The majority of failing samples were clearly linked to rainfall in the 48 hours prior, but sites at Bathurst Quay and Marina Four, between Spadina and York, failed to meet the standard multiple times without rain. “This illustrates that even without the volume of stormwater runoff the combined sewer system is over capacity with waste water from Toronto homes and businesses,” the report says.

The water samples taken from the nine sites in the harbour and on Toronto Island were analyzed for “coliforms,” a naturally occurring kind of bacteria present in the digestive tracts of humans and animals, as well as plant and soil material. Coliform bacteria in water can indicate the presence of human or animal feces. One kind that draws attention is E. coli, which can cause vomiting and diarrhea in human beings – especially pregnant women, toddlers, seniors and those with weakened immune systems. Some strains can be fatal.

At any given time, there can be several possible causes for a high bacteria test result. A flock of geese overhead may have launched their droppings into the area, or large amounts of human feces could be present after an overflow of the city’s sewage system. Bays can reduce water circulation, according to the city, skewing results. “Sometimes it’s a bit ambiguous,” said Mathew Wells, an expert in lake-water quality who teaches at the University of Toronto.

Toronto has what’s called a combined sewer system in its older areas, which is estimated to make up around 23 per cent of the city. Wednesday’s report identifies nine “outfalls” along the shoreline, which dumped hundreds of condoms, tampons and syringes into Lake Ontario this summer. These outfalls are underground pipes that snake through the city and carry waste water from toilets and drains, as well as storm water from roads and other paved surfaces, directly into the lake.

Because of its aged system, Toronto often has trouble when heavy storms hit, Dr. Wells explained. Large snow melts can have the same result. “It’s not something that’s easy to fix, because you’d have to rip up basically every road in the downtown core,” he said.

The city is currently in the midst of a 25-year, $2-billion infrastructure project to combat the impact of combined sewer overflows on the Don River, Taylor-Massey Creek and Toronto’s inner harbour. The idea is to capture overflow in the sewer system, store it in tanks and tunnels when heavy rains overload the system, and transport it to a waste water treatment plant at Ashbridge’s Bay. The report Wednesday made additional recommendations, including placing signs at each combined sewer outlet as cities such as Kingston, Ottawa and Vancouver have done, and notifying the public in real-time when those outlets are flowing. Kingston became the first in Canada to install monitors in its pipes last year, informing its residents of sewage incidents through an accessible, constantly updated sewer overflow map.

But Toronto rejected the idea of monitoring combined-sewer overflow, calling it an expensive and time-consuming task in a statement provided to The Globe and Mail – as well as a pursuit that may not yield any new information for them. 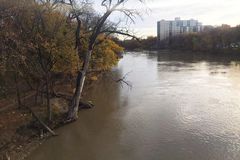 The battle over the world's purest water
May 4, 2009
Toronto’s density, old sewer system lead to issues with flooding: observers
August 21, 2018 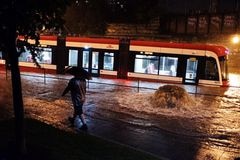