Toronto needs to slash red tape and slow property-tax hikes for business in order to keep its economy moving as it faces challenges beyond its control that range from uncertainty over trade with the U.S. to higher energy costs, a new report says.

The Toronto Region Board of Trade, in the latest of a series of short policy papers intended to spark debate during the city’s municipal election, says the next mayor and council need to redouble efforts to reduce unnecessary regulations on business.

The board says staff in the mayor’s office and an individual city councillor should be appointed to head up efforts to reduce red tape and streamline government by allowing businesses to apply for more permits and licences online.

For example, the report says, businesses seeking licenses can only apply for them in person at the former city hall in East York, outside of Toronto’s downtown, in a “frustrating, half-day process.”

The city should also eliminate overlapping, unenforceable or “cosmetic” rules, the report says.

“Toronto consistently ranks as one of the world’s most attractive cities for business investment with its high standard of living and educated work force,” Jan De Silva, the president and chief executive of the Board of Trade, said in a statement. “We risk losing our advantage if Toronto’s next council does not implement a plan to maintain it.”

The report also calls on the next council to dedicate itself to rebalancing the share of taxes paid by business in relation to residential taxpayers. Compared with surrounding municipalities, more of Toronto’s tax burden is borne by businesses than by the city’s residents.

Council committed to a long-term plan to slow down property-tax hikes for business back in 2005 when David Miller was mayor. The goal was to gradually bring the proportion of the property-tax burden in the city down to a ratio of 2.5:1 by 2020. It is currently 2.7:1, meaning that for every tax dollar paid by residential taxpayers, business pays $2.70. The policy did not decrease tax rates for business, it just raised them more slowly each year than residential rates.

However, in 2017’s budget squeeze, the city reneged on this plan. The Board of Trade says future budgets must not recommit to the same gradual change, but aim to reduce the burden businesses pay even further by 2022, to 2.4:1. Even then, businesses will be paying a larger share of Toronto property taxes than they do in many other cities, the board says.

“Considering the competitiveness headwinds Toronto now faces, it’s time to get this policy back on track,” the report reads.

The report also recommends protecting land in Toronto that is zoned for employment, and resisting the urge to allow parcels of land to be rezoned for condominiums. According to the report, Toronto could run out of industrial land by 2031.

Keerthana Kamalavasan, a spokeswoman for John Tory’s campaign, said the city had made strides under the mayor’s leadership on creating a good climate for business. While city council did alter its long-standing policy on the business-tax ratios in 2017 in order to recoup revenue lost when the province froze rates for the multiresidential sector, she said the city is still on track to meet the policy’s target ratio in 2023.

If re-elected, she said, Mr. Tory would push for a “one-window online service" for business licences, service requests and taxes.

“The mayor is committed to making Toronto a business-friendly city,” Ms. Kamalavasan said in an-email. “Our reputation and standing around the globe have never been stronger. Businesses are flocking here to invest and hire our talent. Just last week we saw Microsoft, Uber and Intel expand their footprint in Toronto.”

Jennifer Keesmaat, the city’s former chief planner who is challenging Mr. Tory for the mayor’s job, said her plans to help business include creating 100,000 units of affordable housing in order to help attract skilled workers to the city. She also pledged to streamline the bylaw and licensing systems – and said Mr. Tory had not done enough.

“John Tory has hurt Toronto’s competitiveness with dithering and delay,” Ms. Keesmaat said in an e-mailed statement. “In 2014, he made an election promise to get rid of the red tape businesses experience … and to publish an annual scorecard on progress. Four years later we are still waiting for action on that commitment.” 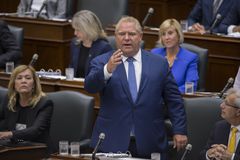 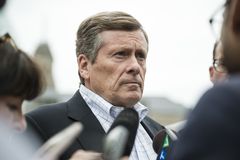