The Ontario government plans to offset the child-care costs that families face as unionized education workers stage more one-day walkouts across the province with no deal in sight.

With negotiations stalled and no contract talks scheduled, the union representing most of the province’s elementary teachers said Wednesday that it was poised to stage one-day strikes on Monday in Toronto, York Region and Ottawa, issuing its required five-day notice.

Meanwhile, the union representing the province’s public high-school teachers said members in Toronto and several other smaller boards across Ontario would leave their classrooms empty on Tuesday, in their latest one-day rotating walkout. They will be joined that day by teachers and education workers at all of Ontario’s English-language Catholic schools – both elementary and secondary – across the province.

For the first time in more than 20 years, all teachers’ unions in the province are involved in job action, from work to rule to one-day walkouts. The union standoff with Premier Doug Ford’s government over class-size increases, wage hikes and cost-savings measures appears to be entering a new phase.

In a move that he said was meant to help families cope, Education Minister Stephen Lecce announced Wednesday that parents will be able to apply for up to $60 a day in compensation if strikes shut down their child’s elementary school or school-based daycare.

“We recognize the impact of union escalation on families is real, and unions expect hard-working families to bear the cost of these cyclical labour actions,” Mr. Lecce said.

Parents of children under the age of 6 in school-based daycares that are closed could be eligible for $60 a day, the Progressive Conservative government says. (The Toronto District School Board says daycare centres inside its schools would be permitted to remain open on Monday despite the strike.) Those with a child in kindergarten could get $40, while compensation for a child in Grades 1 to 7 would total $25. In addition, the parents of children and young people with special needs in kindergarten to Grade 12 could receive $40 a day.

The minister said the compensation could cost the government up to $48-million a day. The government says the money would be drawn from the $60-million a day it says it saves in unpaid teacher wages if the unions walk out.

The plan is similar to the compensation handed out in a teacher strike during the Progressive Conservative government of Mike Harris in the 1990s. In 2014, the B.C. government paid out $40-a-day compensation during a teachers’ strike.

“This is a transparent attempt to bribe the public to support the government,” Mr. Hammond said in a news release.

Alexandra Adamo, a spokeswoman for Mr. Lecce, said late Wednesday that the government had already received 11,991 applications for child-care compensation.

ETFO, Ontario’s largest education union, warned last week that it would ramp up its job action with rotating strikes unless there was progress in talks with the government. The union has been on work to rule, which includes not supervising extracurricular activities outside of the regular school day and not participating in field trips.

Mr. Hammond said in an online video released this week that despite Mr. Lecce’s public support for full-day kindergarten, government negotiators had offered to keep it only if the union agreed to the government’s 1-per-cent wage-hike cap.

Asked to respond, the minister repeated assertions Wednesday that he was committed to “strengthening” full-day kindergarten.

Mr. Lecce points to his moves to soften the original plans for both class-size increases and e-learning in high schools, and maintains that the unions’s main aim is a 2-per-cent wage hike, which would violate the government’s legislated 1-per-cent cap. Union leaders, who are challenging that legislation in court, say they are simply asking for wage hikes pegged to inflation. 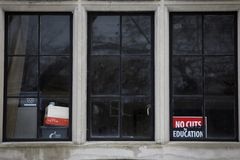