Several Ontario school boards plan to shut down Monday in anticipation of a strike by a union representing 55,000 support workers, forcing parents to scramble for alternative arrangements for their children in a matter of days.

Whether child-care programs would operate during a strike varies by board. Some boards said they would cancel programs operated on school property if a strike occurs. The TDSB, however, says child-care centres located in its schools would be permitted to remain open, but that operating hours would be adjusted.

The potential school closings come in the wake of an announcement by CUPE on Wednesday that it had provided the legally required five-day notice for a strike after just two days into a work-to-rule campaign. Talks are scheduled to resume Friday between CUPE’s Ontario School Board Council of Unions, which negotiates centrally on behalf of the union’s school-board employees, and the government and trustees’ association.

Boards typically close schools during teacher strikes, but several said their decisions were made after reviewing how many employees would be striking and how they would maintain the cleanliness of buildings while keeping schools running smoothly. At the Toronto board, almost half of its employees – about 18,000 workers, including custodians and early childhood educators – would be on the picket lines Monday if negotiations break off on the weekend.

“This is not a decision that we made lightly and we have explored every possible contingency plan to keep schools open,” TDSB director of education John Malloy and chair Robin Pilkey wrote in a letter on Thursday to families.

“Student supervision and safety are our top priorities and without the important services of these school-based employees, we cannot guarantee that our learning environments will remain safe and clean for all students.”

All of the province’s education unions saw their contracts end Aug. 31 amid uncertainty over the decision by Premier Doug Ford’s government to increase class-size averages in some elementary grades and in high schools. CUPE’s strike would take effect during the federal election campaign in which the Liberals have been hoping that Mr. Ford’s record in Ontario and the labour unrest in education will hurt Conservative Leader Andrew Scheer.

In a news conference on Wednesday, Ontario’s Education Minister Stephen Lecce noted the timing of CUPE’s move. His spokeswoman, Alexandra Adamo, said on Thursday that all sides have a full weekend of bargaining.

“Our mission is to reach a deal that keeps kids in the classroom on Monday,” she said.

Laura Walton, president of CUPE’s Ontario School Board Council of Unions, said in an e-mailed statement that the decision to close schools is up to individual boards. She said that she hoped the decision of school boards across the province to close schools “puts pressure” on the government and the trustees’ association to reach a deal with CUPE education workers on the weekend.

The impact of a strike by CUPE members will vary from one school board to the next, as not all support staff across school boards in the province are in the union. The elementary- and high-school teachers’ unions are not in a legal strike position.

A handful of boards, including the Ottawa-Carleton District School Board, remain unaffected as none of their employees are represented by CUPE.

The Hamilton-Wentworth District School Board, meanwhile, said its schools would remain open for teaching and learning during the instructional day, meaning doors would be open 15 minutes before the bell and close 15 minutes after the bell. The board, however, said it would cancel before- and after-school programs, as well as authorized recreation programs in its facilities to keep schools safe and clean.

The Peel board, west of Toronto, said it cannot ensure student safety in the event of a strike by CUPE members, which includes custodial staff and food service workers.

Beginning Monday, “please do not send your child to school … Since we do not know how long the strike will last, we recommend that you begin making alternate plans for the care of your children, in the event that a strike proceeds," the board wrote in a letter to families.

The last time CUPE workers staged a job action – a work-to-rule campaign in 2015 – there were complaints about dirty hallways.

Elections Canada said on Thursday that it is monitoring the potential for strike action as it prepares for the Oct. 21 federal election. Many polling stations are located in schools, and a spokesperson said that Elections Canada has some contingency plans in place for poll workers who may need to access items, such as desks and chairs, during a strike when school staff will not be available to help. 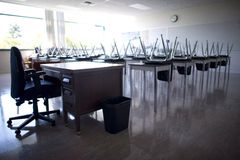