New data show the number of violent incidents in Toronto shelters has more than tripled during the COVID-19 pandemic, a phenomenon those who use the system say is partly driving an increase of outdoor encampments.

The data, which were obtained through freedom of information laws and provided to The Canadian Press, show the number of overdoses also increased.

The city maintains its shelter system is safe and wants the hundreds living in makeshift tents and encampments to move inside.

“The shelter system needs to be torn down from the bottom all the way to the top and needs to be reassessed,” he says.

“Everybody should be able to have their own little private space.”

The 60-year-old has lived in the shelter system for eight years. He has too many stories of violence to remember them all, but says he learned quickly to lay low and expect the unexpected.

“The slightest accidental jostle and fists are flying and tables are all over the place,” Mr. Eschbach says. “It’s just insane, but what’s really insane is the randomness – nothing leads you to see it go off and then all of a sudden there’s this explosion of fury and violence and blood.”

While in the shower one day, he says a naked man attacked him and tried to rape him. Mr. Eschbach delivered a quick punch and was able to slip away.

He says he’s seen friends knocked out and countless others robbed. He’s lived in fear during much of his time in shelters.

Brian Cleary’s shelter odyssey began in the “absolutely miserable” basement of an old church. He’s bounced around the systems since then and witnessed violence first-hand.

One night a few years back, the man in the cot next to his spilled juice all over Mr. Cleary’s shoes and sleep apnea machine. As Mr. Cleary was cleaning up the mess, the man jumped and choked him, prompting staff to kick them both out.

Gru, whose legal name is Jesse Allan, says he has not suffered physical violence at the various shelters he’s lived in, but has witnessed “a ton of violence” there. It is why he prefers to live outside.

“I don’t feel safe in the shelters,” he says.

When he first arrived in Toronto six years ago after breaking up with his girlfriend, Gru said he couldn’t afford first and last month’s rent. He had a full-time job as a bike courier, bought a nice tent and lived in a ravine for a time.

Gru, terrified of contracting COVID-19 and keen to steer clear of people, opted to get out of town for the summer and spent months touring around Southwestern Ontario on his bike.

When he returned, he lived for several weeks in the Don Valley. That’s when he heard about the encampments and the supports being offered by volunteers and outreach workers.

He ultimately moved into one at Trinity Bellwoods Park, where he stayed through the winter.

“It’s a real community,” he says of the encampment. “We care for each other.”

Gord Tanner, the city’s director of homelessness initiatives and prevention services, admits there’s been a rise in violence in the shelters.

“In many ways I think that runs parallel to the fact that we’re working with some people that have more complex needs now related to whether it’s untreated health or mental-health issues or substance use,” he says.

Mr. Tanner says the demographics of shelter users began shifting in 2020, with more singles and fewer families tapping into the system. He says he believes the shift may be related to the spike in violent incidents.

Mr. Eschbach, Mr. Cleary and Gru all hope the shelter system can be changed.

All three men ended up in the city’s hotel program for the homeless and say they feel safer in their own rooms that lock.

But issues remain, according to Gru, who says security guards performed “wellness checks” three times a day at a downtown hotel the city leased for those who were previously living outside.

Gru says the checks involved guards using their keys to enter rooms at will, including late at night when occupants may be in bed.

“It’s traumatizing when they just walk in, especially if I’m sleeping,” he says.

“It’s the same surveillance and harassment systems that we have out in the parks where police officers come through on a regular basis to keep an eye on us.”

He says he persuaded management to stop the wellness checks after weeks of negotiations.

Mr. Eschbach is on a waiting list for housing and hopes to move into a new downtown building the city is refurbishing to provide supportive housing for 250 people.

He’s been staying at the Comfort Hotel near the Pearson International Airport while he waits.

He doesn’t see as much violence there, but it does still happen. During his first week, for instance, he says one resident “went nuts” and trashed the lobby, launching computers everywhere and terrifying the receptionist.

Mr. Eschbach feels the big downside to the hotel is the isolation.

“I’m in the middle of nowhere,” he says, referring to the hotel’s location in a sprawling suburb well west of central Toronto. “If I want to go pick up something from the pharmacy, I have to walk a mile and I’m disabled. It’s the land of the car, and homeless people have all their supports downtown.”

Mr. Eschbach has access to other amenities, including a television in his room, WiFi and a doctor and nurse on-site.

Mr. Cleary moved to the same hotel as Mr. Eschbach in June, 2020, and shared similar concerns. In March, Mr. Cleary won the lottery of sorts when the city helped him find a rare, rent-geared-to-income apartment.

“I finally have some peace,” he says. “I just wish my friends outside and in the shelters can get their own spot too.” 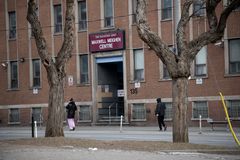 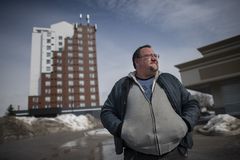 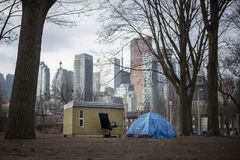