Endangered they may be, but, this summer, two piping plovers are raising a family of tiny chicks on a Toronto beach where the species has not successfully nested in more than 80 years – all within sight of downtown skyscrapers, hungry predators and airplanes taking off overhead.

Starting on June 20, a total of four eggs hatched in the couple’s nest on the sand at Hanlan’s Point on Toronto Island. Looking no bigger than fuzzy golf balls on toothpicks, the hatchlings have been scurrying around under their parents’ watchful gaze ever since.

“Everybody’s loving them,” said Andrea Gress, who co-ordinates the monitoring of piping plover nests across Ontario for Bird Studies Canada, and who has been working with volunteer monitors at the site.

If the chicks manage to survive another few weeks − by which time they should be able to take flight and fend for themselves − it will mark the first time piping plovers have successfully bred on the island since 1934.

The development is a sign that the migratory shorebirds are making a comeback on the Great Lakes after their numbers plummeted to just a dozen breeding pairs on Lake Michigan in the 1970s. Efforts to protect the species there have gradually paid off. Last year, 76 nesting pairs were recorded across the Great Lakes region. Together with two larger populations centred on the Canadian Prairies and the Atlantic coast, the entire species numbers about 8,000.

Ms. Gress is monitoring eight nesting sites in Ontario, including the one at Toronto Island. As with all plover nesting sites, the location is strikingly vulnerable, with the added disruption of planes taking off from nearby Billy Bishop airport every few minutes and joggers routinely pounding the sand just steps away. To help keep the plovers safe, the site has been temporarily fenced off and marked with signs.

“This is actually a fairly isolated part of the island,” said George Turner, one of several volunteers who have been keeping watch over the site in two hour shifts since the nest was discovered in May. “Most people who come by are respectful of the fence and are very supportive.”

Last Friday, with the help of volunteers, Ms. Gress managed to corral the chicks and drop a small, basket-sized net over them. Then, she placed coloured bands around the chicks’ spindly legs so they can be distinguished from one another and identified in future years. Both parents were similarly banded at birth, offering a fascinating glimpse of how the recovery strategy is working.

Records show the male hatched last year in Michigan, while the female was born on Wasaga Beach on Georgian Bay in 2013. Both birds would have spent the past winter in Florida or the Caribbean before returning to the Great Lakes in the spring. Then they began searching for a mate − a big challenge when numbers are so few.

“It’s tough,” Ms. Gress said. “Hopefully, you get one that lands on a beach at the same time as another one.”

Erica Nol, a biologist at Trent University who has launched a study of piping plovers, said the birds’ preference when it comes to nesting sites remains a mystery. Why choose Toronto Island, for example, but not other places that would appear just as suitable, such as Point Pelee on Lake Erie?

“We’re looking to see if there’s something specific about those beaches that’s attracting the birds,” she said. The answer could come down to food availability for foraging chicks. The study could help pinpoint areas where natural beaches should be conserved with plovers in mind.

The biggest threats to plover chicks include gulls and crows, species that are present in large numbers because of human activity. Garbage left on beaches also attracts scavengers, such as raccoons, which also pose a threat to nests.

Other predators include small birds of prey, such as merlins, which are also making a comeback thanks to the banning of the chemical pesticide DDT. Researchers at Michigan State University published a population study earlier this year that reveals piping plover numbers could decline again if conservation plans fail to take these predators into account.

“From our results, it is clear that increasing predator-control measures even at a few additional sites could go a long way,” said Sarah Saunders, a post-doctoral researcher who led the study.

On Toronto Island, the parents of the newly hatched chicks seemed determined to beat the odds. They could be seen last Friday harassing cowbirds that were coming too close to their youngsters. Both appeared to be committing equal time to the effort.

“These adults are on it,” Ms. Gress said. “They are great to watch and they really do seem as tough as nails.” 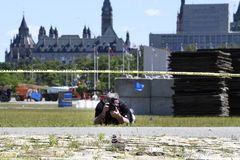 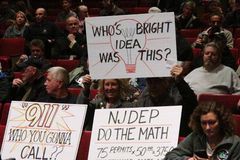 Nature conservancy protects hectares of breeding habitat for birds
July 28, 2015
Follow Ivan Semeniuk on Twitter @ivansemeniuk
Report an error Editorial code of conduct
Due to technical reasons, we have temporarily removed commenting from our articles. We hope to have this fixed soon. Thank you for your patience. If you are looking to give feedback on our new site, please send it along to feedback@globeandmail.com. If you want to write a letter to the editor, please forward to letters@globeandmail.com.
Comments