The trial of a teen boy accused of sexually assaulting two fellow students at Toronto’s St. Michael’s College School is hearing from another student at the prestigious private high school.

Taking the stand by video conference, the witness was asked today to identify people seen on security footage coming in and out of the school’s locker-room after a football game in the fall of 2018.

Last week, court viewed two videos in which another teen boy, one of the complainants, described the incidents to a police investigator.

In one of the recordings, that teen recalled being sexually assaulted with a broom handle by a group of students in the school’s locker-room in October 2018.

In the other, he recounted witnessing a similar sexual assault on another student in the same locker-room roughly a month later. 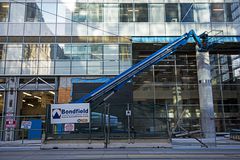