A 12-year-old Toronto boy struck by gunfire while walking home from a Saturday shopping trip with his mother has died, the innocent victim of an apparent gang skirmish against a backdrop of elevated gun violence in the city.

Toronto police confirmed the boy’s death on Thursday morning and announced upgraded charges against the two men arrested for an eruption of gunfire that sent weekend shoppers in the city’s northwest Jane and Finch neighbourhood scrambling for safety.

“This investigation has shown us that the two accused had planned to carry out murder,” Detective Sergeant Keri Fernandes said. “They had a plan to murder someone that day.”

Both men had court-ordered firearms prohibitions. Police said that Mr. Smart had also violated his parole.

“To me it’s outrageous that these people weren’t already in custody and behind bars,” said Superintendent Ron Taverner, unit commander of neighbourhood police detachment, 31 Division.

Police allege the two men drove to an apartment building located on Stong Court around 2:20 p.m. and sprayed at least 30 rounds at a group of people inside a vehicle. The apartment complex sits a few hundred metres from Yorkgate Mall, the commercial heart of the Jane-Finch neighbourhood. A round struck the boy, who had been walking on the opposite side of the street, police said.

Emergency responders performed CPR on the boy before he was rushed to the Hospital for Sick Children. He was pronounced dead at 2:08 p.m. on Wednesday.

The family has not authorized police to release his name. Community members identified him only as Dante.

Three other people hit by rounds have been released from hospital.

On Monday, police located and arrested Mr. Chambers and Mr. Smart outside a downtown Canadian Tire, seizing three firearms in the process.

Investigators are still searching for a third suspect who they allege acted as the driver.

Toronto recorded a record number of shootings last year and is on an equal pace this year with 425 total incidents so far in 2020. The area policed by 31 Division has had a disproportionate number of those shootings with 82, almost double the number of the next nearest detachment.

At the scene of the shooting on Thursday, little evidence remained of the tragedy aside from shaken community members, who said they feel abandoned by politicians.

“They show up with the cameras when something like this happens and then you never hear from them again,” said a crossing guard, who said she knew the boy. The Globe and Mail is not identifying her because she feared reprisals for speaking out. “Something needs to happen. I’ve been working this job 13 years and I can’t remember ever being so nervous for my safety standing out here in the open.”

Mayor John Tory, who endured withering criticism from residents during a tour of the neighbourhood on Sunday, expressed his condolences to the family. “No family deserves such heartbreak,” he said in a statement. “We must do more and better for this family and for the many families affected by gun violence.”

One anti-violence organizer said he’s been disturbed by a lack of outrage around the boy’s death considering the upheavals that came after the death of George Floyd in Minneapolis. “Our city got up and marched and protested and stood up for this unfortunate soul whose life was taken by a police officer,” said Marcell Wilson, a former gang-member who now runs One by One Movement, a crime prevention group. “Where are the marches now? Where’s the outcry, the support for shooting victims and young people in our city? It really bothers me that violence like this is becoming normalized.” Singh calls on government to counter hate groups, which have tripled since 2015
November 10, 2020 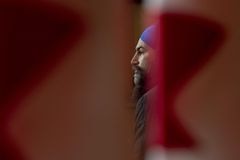 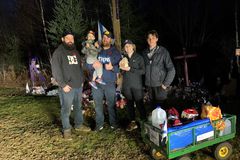