The largest academic hospital in Canada received praise last week for a plan to turn part of its land into affordable housing, but the announcement was bittersweet for local community associations and long-time tenants located at one of the hospital’s sites.

While supporting University Health Network’s project, the groups and some residents say the Toronto health centre has historically been an indifferent landlord and that affordable housing it already owns near where the new site is planned is not well maintained.

Community advocates said hospital officials who were promoting the affordable-housing project did not realize that their own institution was a landlord with unhappy tenants.

The community concerns are being raised after UHN said it is committing a 30,000-square-foot plot of land worth $10-million toward the project. Last month, it signed a memorandum of understanding with the City of Toronto and the United Way Greater Toronto to launch what they are calling a “social medicine initiative.”

Late Saturday, UHN chief executive Kevin Smith contacted tenants by e-mail to assure them that their concerns over their current housing would not be disregarded, said community organizer Victor Willis, who was among the recipients of the missive.

The e-mail said the hospital would offer a legally binding agreement to involve the tenants, said Mr. Willis, executive director of the Parkdale Activity-Recreation Centre.

The houses are in the gentrifying Parkdale neighbourhood. They are located south of the EW Bickle Centre, a part of the Toronto Rehabilitation Institute, close to the new project site.

The hospital network became the owner of those houses, a dozen two-storey semi-detached Victorian homes, in 2011 when UHN integrated with Toronto Rehab, which itself had inherited the properties from a previous merger. There are about 30 tenants, some of whom have lived for three decades at those addresses, on Close, Dunn and Springhurst Avenues.

Mr. Barndt is the executive director of the Parkdale Neighbourhood Land Trust, a non-profit that aims to acquire land and develop it for community use. The trust collected more than 900 signatures after it started a petition this summer, urging UHN to preserve its existing housing stock.

He said that, despite their area’s housing shortage, residents tried in vain in the past to get the health centre to rehabilitate two other UHN-owned homes that are vacant and boarded up. A third decaying house had been torn down and never replaced.

In a statement e-mailed to The Globe and Mail on Friday, UHN said that it was committed to working with the community to develop its project, and would look at all its available land, including the two empty houses.

Both Mr. Barndt and Mr. Willis said the hurdles faced by tenants reflect the fact that housing was not until now a priority for a large institution like UHN.

“It inherited an activity which it is not particularly good at … it’s never been able to fully understand how to be a good landlord, because that’s not actually its core competence,” Mr. Willis said.

Tenants contacted by The Globe said they had to deal with leaky basements, porches in poor shape, rundown eaves and masonry. They added that they did their own repairs because the property-management company was unresponsive. The Globe is keeping the tenants’ names confidential because they said they were afraid of antagonizing UHN.

In its statement to The Globe, UHN said it had hired a certified home inspector to assess what repairs are needed. The hospital network added that it would set up a process where tenants can raise concerns about the property-management company.

Mr. Barndt said that, in 2017, the land trust was in talks with UHN and the city’s Affordable Housing Office. The city office offered capital funding to refurbish the two vacant houses, but that UHN chose not to proceed.

UHN said that was because it had not finalized its strategic plan at the time. 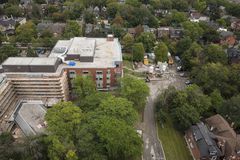