Two men are dead, and at least five people have been injured, after a 48-hour period in Toronto plagued by gunfire.

“It’s an unusual amount of shootings, and it’s very concerning,” Toronto Police Constable David Hopkinson said. It’s too early to say whether any of the incidents are connected, Detective Sergeant Hank Idsinga of the force’s homicide unit said. These shootings could either be unrelated or retributive – and violence typically comes in waves, he said.

“This year was a bit of a constant wave," Det. Sgt. Idsinga said.

The latest victim is a 30-year-old man, who police did not identify, and his death bumps Toronto’s tally for this year to 95, a month after the city eclipsed its previous annual record of 89 killings. Fifty homicides this year have involved gunfire.

The man was walking with a group of people near Spadina Avenue and King Street West about 12:10 on Wednesday morning when someone shot him and a woman nearby who was injured. Police are searching for a suspect they believe fled in a blue Mazda.

Less than 24 hours earlier, in the Jane and Finch area, another man was killed by gunfire. Lawrence Errol Joel John, 28, was sitting with a woman in his car around 6:17 a.m. on Tuesday. A group of people approached the pair, police say, then shot into Mr. John’s car. He died from his injuries at the scene.

Throughout the day on Tuesday, gunshot victims were also found in four different neighbourhoods across the city. Each had injuries police called serious or life-threatening. At mid-day, a 24-year-old man was allegedly forced into a building at gunpoint near Rexleigh Drive and St. Clair Avenue after being struck in the face by the weapon. And early on Wednesday, officers responding to reports of shots in Parkdale found shell casings. Investigations are under way, and one person so far was brought into custody.

Shortly after 3 p.m. on Wednesday, Firgrove Public School near Jane and Finch was placed in a hold-and-secure situation, after shots were reportedly fired outside the elementary school. No victims were found at the scene. Police are looking for a suspect who may have been in a silver or white SUV or minivan.

Toronto police data, which do not include the incidents this week, show 559 people have been struck by bullets this year. That carnage was the subject of heated debate in this year’s municipal election. Mayor John Tory, who was re-elected to a second term, has repeatedly called for a ban on handguns and assault weapons. The federal government is considering the idea, and has launched a nationwide consultation process. Pressure on Ottawa to toughen gun laws increased after a mass shooting rocked Toronto’s Danforth in July, resulting in the death of 18-year-old Reese Fallon and 10-year-old Julianna Kozis.

Mayor Tory and Toronto Police Chief Mark Saunders discussed the Spadina and King shooting on Wednesday morning, the mayor told The Globe and Mail in an e-mailed statement. “[I] expressed my very serious concern over these brazen acts of gun violence,” he wrote, labelling the incidents this week as “cowardly acts.” The two men agreed that reducing the illegal gun supply, and investing in neighbourhoods and families, are necessary to combat the violence, Mr. Tory added.

Det. Sgt. Idsinga said community co-operation is critical to curbing the violence which he sees as a joint effort between police, government and local communities. Local divisions are open 24-7, he said, and any sliver of information could help investigators.

“As the police service, we play a part, but we’re not the solution to the entire problem," he said. “That’s where the communities and the witnesses have to step up and help us out, and we’ll help them out. It becomes a political issue as well, where the politicians have to have their priorities in the right order and put the assets in the right places, to hopefully deal with the problem starting at the grassroots level, right up to the enforcement level.

“Hopefully, this is a short wave,” Det. Sgt. Idsinga said. “We’ll see what the next few days bring.” 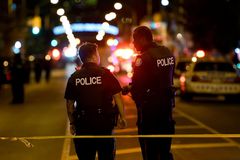 One man dead after shooting in Toronto’s east end
October 3, 2018 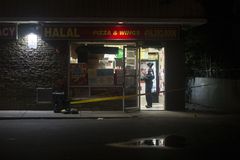 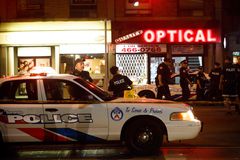