TORONTO
The Canadian Press
Published May 31, 2020 Updated June 3, 2020
Text Size
Please log in to listen to this story. Also available in French and Mandarin. Log In Create Free Account

A Canada-wide warrant has been issued for a 17-year-old suspect wanted in connection with a downtown Toronto shooting earlier this week.

The suspect was seen in surveillance camera footage released by police at a press conference on Thursday, showing an exchange of gunfire that led to the death of 21-year-old Dimarjio Jenkins, a local rapper who went by the name Houdini.

Police say a boy and a woman were also wounded in the shooting on Tuesday near the intersection of King and Peter streets.

The suspect is wanted on seven charges, including discharging a firearm with intent to wound.

Police say he’s believed to be armed and dangerous, and urged people to not approach him, but call 9-1-1.

Mr. Jenkins was pronounced dead shortly after the shooting, while the boy and woman are expected to recover.

Investigators say the two males were targeted while the woman appeared to be an innocent bystander. 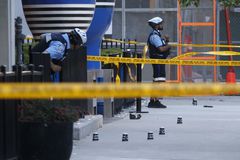