The downtown Toronto district that Sidewalk Labs had hoped to develop is getting a new vision. Instead of robots carrying freight through underground tunnels and heating run by artificial intelligence, the focus will be on affordable housing, access to Lake Ontario and ambitious public architecture.

Waterfront Toronto is opening up the planning process for the 4.8-hectare site, known as Quayside, on Queen’s Quay East about a kilometre from the city’s financial district.

The public agency is seeking development teams to bring proposals for “a dynamic, inclusive and resilient community,” and it plans to choose one this fall.

“This will be a landmark project with an emphasis on iconic architecture,” Stephen Diamond, chair of the board of directors for Waterfront Toronto, said in an interview. “And there will be a clear emphasis on our most pressing priorities, such as affordable housing, low-carbon buildings, aging in place and providing important open spaces that support our physical and mental health.”

This presents a fresh approach for what has been a contentious site. In 2017, Waterfront Toronto invited development proposals for Quayside that would address a host of public policy goals including affordable housing but also creating a hub for employment in tech.

In October that year the agency selected a proposal from Sidewalk Labs, a Google affiliate company, to redevelop the site. But after 2 ½ years of negotiations, the company withdrew its proposal in May, 2020.

With the new proposal, Waterfront Toronto is not emphasizing technology. Its stated objectives for Quayside include supporting locally owned and minority-owned businesses, design excellence, buildings with a small carbon footprint and new public spaces.

The agency is jointly controlled by the governments of Toronto, Ontario and Canada. It has a mandate to transform 800 hectares of land, largely publicly owned, around Toronto’s port on the edge of downtown. It has been doing so through partnerships with real estate developers.

While the agency has operated since 2001, it attracted global attention for the first time with the Sidewalk Labs deal and resulting controversy. Sidewalk intended to build a neighbourhood “from the internet up.” This prompted intense debate, particularly around the collection of personal data and how such data could be used by private companies.

Waterfront Toronto now has different leadership; both chief executive officer George Zegarac and Mr. Diamond assumed their positions in 2019. When asked what the agency had learned from the previous deal, Mr. Diamond said the current Quayside plan will not require any major regulatory changes, as the Sidewalk scheme would have. As well, the financial model and public policy goals are clearly defined, he said.

“We want to make sure we pick a proponent that has the capability to produce what they say they’re going to produce, and has the background and experience,” he added, making a reference to Sidewalk Labs. “I think that was also, frankly, a misstep the last time.”

The winning development team will have the right to build approximately 3.3 million square feet of buildings – residential, commercial and institutional – covering roughly two-thirds of the site and including space for long-term elder care.

The remaining 1.6 hectares will go to public space and streets, including a new park of roughly 0.5 hectares. A conceptual drawing of the site shows one mid-rise and four high-rise buildings along Queen’s Quay, with an institutional building and parks to the south.

That institutional building will house “a new cultural use,” Mr. Zegarac said, “and we are aiming for a combination of uses that will keep the place lively 24/7.” This could include a performing-arts centre, a visual art gallery and complementary activities. Mr. Zegarac said the architecture of this building may be determined through an international design competition.

Separately this week, the public agency announced a significant new waterfront park adjacent to Quayside. The design would partly cover Parliament Slip – an artificial inlet where ships once docked – with a dramatically curving wooden deck and bridge that provide places to swim and canoe in Lake Ontario. The new park and cultural centre would be next door.

The deck and bridge structures will be designed by local firm DTAH and world-renowned Dutch landscape architects West 8. The two firms previously collaborated on a successful series of Wavedecks along the Toronto waterfront. “Our goal is to reconnect the city to the water,” Mr. Zegarac said.

Waterfront Toronto plans to have a shortlist of development teams by June. The chosen proposal will be subject to city planning regulations, and approvals could take several years before construction begins. 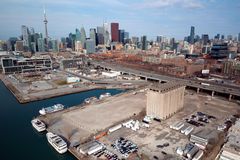 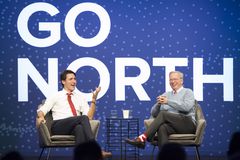 Opinion
Canada’s AI strategy needs to be built on more than hype
December 10, 2020 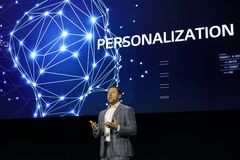