Renuka Amarasingha. Dorothy Sewell. Sohe Chung. We’re all coming to know the names of these women, among the 10 people killed in last Monday’s van attack in North York. The city’s frail thoughts are with them.

But there is another set of anonymous dead and wounded who deserve our attention: those who are struck inadvertently by cars on our dangerous streets. There’s only so much we can do to defend against monstrous acts such as last week’s attack. But we can do something to honour the other innocents who die in Toronto at a rate of one a week: change our roads.

We know exactly what to do. Very simply, fast-moving roads kill people; slowing down traffic saves lives. And we can accomplish that with design, if as a society we care enough.

First, the realities of vehicle-borne attacks: They are terrifying in their randomness and can be surprisingly potent.

But how do you stop them? In New York on Halloween in 2017, a 29-year-old inspired by the Islamic State ran a rented van down a busy bike path. In the aftermath, the city’s government pledged to install bollards and planters in sensitive locations. But the price tag was staggering: US$50-million for measures that consisted mostly of 1,500 bollards. And how far will that go? The city can try to protect highly symbolic spots such as Times Square, and indeed the landscape architecture for pedestrian plazas there is designed to keep cars out.

But New York still has thousands of kilometres of roads where people walk alongside cars. A crosswalk full of children after school, a crowd of tourists standing beside a historic building, a soused crowd after last call – these are all potential targets if you’re trying to wreak death.

That’s true in Toronto, too. The efforts city staff made to protect pedestrians in the past week, adding Jersey barriers around Union Station and Air Canada Centre, were logical in the short term to prevent copycat attacks.

But if maintained in the long term, such moves will only push any future attacks to “softer” targets. How many people were surprised to see Yonge and Finch as the venue of this week’s carnage? I was not; I spent part of my childhood nearby and then my high-school years in York Region, so I know North York Centre. It’s one of few places in suburban Toronto that has public life. It feels busy; it feels somewhat like a city. It feels like a target. And it was, allegedly, for Thornhill native Alek Minassian.

But you can’t barricade the downtown core, and North York Centre 10 kilometres away, and every street corner in between. It’s practically impossible. “And if you do that,” says urban designer Ken Greenberg, “it only leads to people becoming fearful of public space. But that becomes a downward spiral: We need sidewalks and public life for people to come together, as we’ve seen at Yonge and Finch.”

Indeed. Over the past week, mourners were gathering at Mel Lastman Square and a small park at the corner of Yonge and Finch. These two public places were where people placed their flowers and tributes, where the therapy dogs were ready to snuggle and a string quartet played elegiacally.

In between is a kilometre of mean sidewalk along six lanes of speeding traffic. This strip of Yonge is home to thousands of people, and a miserable place to walk. And people die here, pedestrians get hit and wounded and killed.

We learned from a city-planning report just this year that there were 78 collisions involving pedestrians in and along that North York stretch of Yonge from 2010 to 2017. Eight collisions left people dead or seriously injured.

This is why the area was targeted by the city’s Vision Zero strategy, with the goal of reducing deaths and serious injuries from road crashes. That’s a dilution of the Swedish term, which is all about cutting such deaths to zero. Still, this aspiration drove a redesign of the street; a city-planning study dubbed Reimagine Yonge proposed altering the road to add wider sidewalks, bike lanes and a central median. All this would have made the place beautiful and more prosperous.

It would also have saved lives. Not just people on bikes, but pedestrians, too: It would have created narrower lanes for car traffic and physical separation between cars and pedestrians. These measures are proven to keep people safer, slowing down vehicles – which are 10 times more deadly at 50 kilometres an hour than at 30 km/h – and keeping them apart from people walking. Speed-limit signs, as any honest driver will agree, don’t work. Roads that make drivers slow down do.

“Through road engineering, you can make streets significantly safer,” says Gil Penalosa, the planner who leads the local non-profit 8 80 Cities. “Many cities have shown this. We have to design streets for the speed at which we want people to move. Right now, people are getting killed and people are getting injured in the course of everyday business – and we accept that.”

Indeed. The Yonge plan ran into a wall at Toronto city council, where certain councillors were more interested in the travel time of suburban drivers – a theoretical two minutes for a commuter from Thornhill, just north of the city – than the safety of Torontonians. Denzil Minnan-Wong deserves special credit for his theatrics. Whether they don’t understand the connection between road design and safety, or whether they’re just being impossibly callous, that needs to change.

In Toronto, The Globe and Mail’s Oliver Moore found in 2016, more than 160 pedestrians had been killed in collisions in the previous five years. This year, that number is at 15.

“Toronto is moving at a snail’s pace on Vision Zero,” Mr. Greenberg says, “and we shouldn’t be distracted from that. If we really care about people’s safety, we should look at that much more seriously.”

That’s right. We should look at “traffic calming” not as an exception but as a rule. In designing and debating roads, we should be counting not the minutes of drivers but the human lives we can protect. We can’t, for the most part, stop a determined attacker, but we can attend to the everyday deaths and misery that happen along our roads. And stop them. 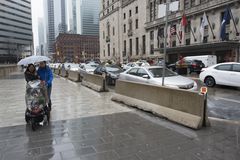 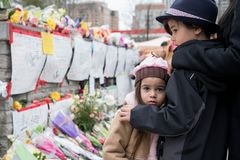 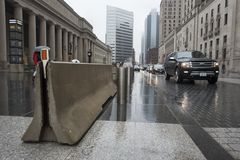