The parade started shortly after 10:00 a.m. at the Princes’ Gates, at 11 Princes’ Boulevard, at the eastern entrance to Exhibition Place and moved east on Lake Shore Boulevard to York Street, then north on University Avenue, finally arriving at Nathan Phillips Square around 3:15 p.m., about 3 hours later than they were supposed to arrive.

Mayor John Tory has proclaimed Monday “We the North Day.” “I encourage everyone in our city to show our support, pride, love and appreciation for this incredible team,” he said in a tweet.

Raptors president Masai Ujiri said: “This means so much to our city and to many in Canada and we are looking forward to showing everyone the Larry O’Brien Trophy on Monday. Bringing the NBA championship to Toronto is the realization of a goal for our team and for our players and we are thrilled to be able to celebrate together with our fans.”

The Raptors won the championship last Thursday, defeating the Golden State Warriors in Oakland in Game 6 of the best-of-seven series.

A parade and rally play-by-play:

At 4:35 p.m., The rally ended, three hours later than it was supposed to end. The speeches only paused for a moment during the madness following the shooting. After Chairman of Maple Leaf Sports & Entertainment Larry Tanenbaum’s speech, Raptors play-by-play man Matt Devlin called a number of the players up to speak, with many choosing to spend their time with the microphone thanking the fans. City spokesman Brad Ross said more than a million people were gathered in and around the area of Nathan Phillips Square.

At 4:20 p.m., Toronto Police confirmed through Twitter they have located two victims connected to the shooting, both with serious but not life-threatening injuries. Police later updated the injured figure to four, all not life-threatening, with three people in custody and two firearms recovered.

Word of the shooting sent a section of the crowd into a stampede, with people screaming and hiding in nearby bushes. Eye witnesses say children in strollers were bowled over as frantic parents tried to shield them.

At 4 p.m., Toronto Police say shots have been fired at a massive victory rally for the Toronto Raptors. They say there are reports of a woman being injured. Festivities were briefly suspended during Mr. Tanenbaum’s speech. Some in the crowd are seen running from the area.

At 3:40 p.m., Toronto Mayor John Tory spoke first thanking the team for “inspiring us.” He then dedicated a section of road near Scotiabank Arena as Raptors Way before presenting Mr. Leonard with the key to the city. Mr. Tory said the 2019 Finals MVP and his teammates already have the key to the hearts of Torontonians. Mr. Leonard was accepting on behalf of the team. Prime Minister Justin Trudeau then spoke second about how the entire country came together to cheer on the team.

Drake spoke toward the end of the ceremony urging fans to turn to a person next to them and give them a hug and say congratulations. “Make some noise for the Toronto Raptors,” he said. “Give somebody a hug today.”

At 3:15 p.m., The players arrived at Nathan Phillips Square with Kyle Lowry carrying the Larry O’Brien trophy. On the bus and on stage, Mr. Lowry wore a No. 20 Damon Stoudamire jersey. At 3:30 p.m., the announcer began introducing the players and coaches to a thunderous applause. The second last player announced was Kyle Lowry, who walked out carrying the trophy. The last player introduced was Kawhi Leonard, who walked out pumping the Bill Russell trophy for being named MVP of the NBA Finals.

Prime Minister Justin Trudeau is also in the crowd, shaking hands with fans, some of whom have been waiting for over eight hours. At one point, Trudeau briefly shook hands with Ontario Premier Doug Ford, who was decked in a Raptors T-shirt. Police have closed off the square outside city hall, and viewing screens have been set up at Yonge-Dundas Square for those who couldn’t make it.

At 1:05 p.m., police officers are trying to stop more people from entering Nathan Phillips Square, where the Raptors parade procession is expected to arrive. The city tweeted the square is at capacity and no one else will be allowed in. Some fans are already leaving the square saying the crowd is getting rowdy.

A child that appeared to be semi-conscious was pulled over by the crowd by security and put on a stretcher. Other fans are complaining about lack of water and say they’re getting dehydrated. Police say “several children” have been separated from their parents. They say the children will be taken to 52 Division, where parents can pick them up.

At 12:15 p.m., Toronto police say all viewing areas along the route of the Raptors parade are close to capacity. They are urging fans to stay off the road so that the players and their floats can move along. The procession was expected to reach city hall at noon, but was slowed down by the massive crowds. At Nathan Phillips Square, police officers are taking families with young kids to a separated section away from the main crowd. Meanwhile, GO Transit has set up a designated spot at Union Station for any children who may get separated from their families.

At 11:10 a.m., the crowd at Nathan Phillips Square is awaiting the arrival of the Raptors players as the parade continues. Some fans are holding signs that read “Stay” aimed at Raptors star Kawhi Leonard, who was named 2019 Finals MVP last week. Leonard has a player option on his contract for next year, but is expected to decline it and become a free agent. He is eligible to start talking to teams on June 30 at 6:00 p.m. ET. The Raptors acquired Leonard in a trade with the San Antonio Spurs last summer, sending former Toronto star DeMar DeRozan to San Antonio as part of the multi-player deal.

At 11:00 a.m., Toronto rapper Drake is riding alongside the Raptors in the team’s victory parade. A staunch supporter and the team’s global ambassador, Drake has been a fixture at every home game. He watched the final game against the Golden State Warriors last Thursday at Jurassic Park with thousands of boisterous fans. The rapper was with the team this weekend as they celebrated their historic win in Las Vegas.

At 10:25 a.m., Raptors point guard Kyle Lowry is holding the Larry O’Brien Trophy given to the new NBA champions. He is one of the Raptors riding in a double-decker bus moving slowly along the parade route lined up with thousands of fans. Lowry is wearing a Damon Stoudamire jersey with the Raptors’ original logo. Stoudamire was the Raptors’ first-ever draft pick and went on to win rookie of the year in 1995-96. Lowry and Stoudamire were teammates with the Memphis Grizzlies in 2007-08.

At 10:05 a.m., the Raptors’ victory parade has kicked off, with thousands of fans turning out to celebrate the NBA champions. Players and their families are riding in five open top double-decker buses along the route, smiling and waving to the cheering crowds. Some of the Raptors are smoking cigars and drinking champagne. Head coach Nick Nurse is in a red convertible with his family, while other coaches and executives are on floats and other vehicles. The parade is set to end at a square outside Toronto’s city hall, where a rally will be held.

At 9:45 a.m., thousands of Raptors fans have packed the route of the parade celebrating the Toronto team’s NBA championship win. The parade is set to start at fair grounds by Toronto’s lakefront and end at a public square outside city hall. Players will be riding in open top double-decker buses, along with the families, coaches and team executives.

What people are saying from the parade route and Nathan Phillips Square:

The @raptors are ready to hit the streets for the Championship Parade! 🎉 🏆 ⠀⠀⠀⠀⠀⠀⠀⠀ Watch LIVE in the NBA App.

A post shared by Toronto School of Management (@torontoschoolofmanagement) on Jun 17, 2019 at 6:25am PDT

With files from Globe staff and The Canadian Press. 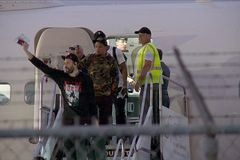 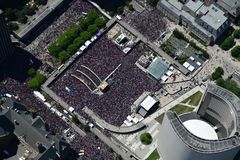 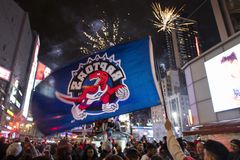