In the worst years of New York’s violent-crime wave, in the early 1990s, the city was seeing more than 2,000 murders a year. Last year, it had fewer than 300. How did New York do it and what can Toronto learn from the experience?

Toronto, it must be said right off the top, is not even remotely in the same league. Although Torontonians are rightly alarmed by a rash of recent shootings, some of them shockingly brazen, the city has seen just over 50 homicides this year, 10 of them in the Yonge Street van attack.

Still, there are lessons for Toronto in the dramatic decline in violent crime in New York and other major American cities. They are laid out in an excellent new book on the issue. In Uneasy Peace, sociology professor Patrick Sharkey plows through stacks of studies and visits several big-city neighbourhoods that have been changed by the crime drop. His findings should give hope to anyone who thinks urban crime is one of those problems from hell – perennial, intractable, impossible to solve.

Related: Mapping shootings across the city of Toronto

When it became clear some years ago that crime rates were falling, all sorts of theories were put forward to explain it. The liberalization of abortion rules had reduced the number of children born to mothers not capable of providing them with a good upbringing. Regulations cutting the amount of lead in gasoline meant that fewer children were exposed to damaging lead levels. The economy improved. Alcohol consumption fell. Even the spread of air-conditioning and the rise of time spent indoors were supposed to have contributed.

Mr. Sharkey doesn’t discount any theory. The roots of crime are devilishly complex. But he doesn’t think any of these factors can truly explain what happened.

“Instead, I have come to believe that violent crime fell because many different segments of American society mobilized to confront it.”

The first step was putting more cops on the street and locking up more bad guys. Washington helped pay for tens of thousands of new officers who fanned out to crime-ridden neighbourhoods and made their presence known. Private security officers proliferated, too, along with security cameras and other anti-crime technologies.

At the same time, thousands of community groups sprang up to take back their neighbourhoods. The result was a transformation of public spaces into more peaceful places.

Streets that had been bleakly abandoned for decades started coming back to life. Fear began to recede. “It is not just that fewer people are roaming the streets looking for a victim,” Mr. Sharkey writes, “but also that more people, organizations, officers and even cameras are looking out over those same streets to make sure no one is victimized.”

The lessons for Toronto are clear enough. To start, step up policing. Mr. Sharkey isn’t saying a massive, military-style buildup is the answer. In fact, he notes that, after the racial tensions of the past few years, many American forces are trying to move beyond “warrior policing” and rebuild ties with the communities. But blue uniforms on the street make a difference.

So does focused, data-based police work. Mr. Sharkey visits New York’s CompStat centre, a control room where police use detailed data on crime patterns to send officers where they are needed most. As part of the much-copied management system, officers have to face fellow cops and answer sharp questions about what is happening on their beat, how they are responding and whether they are getting results.

Second, Toronto should fund and empower community organizers. Mr. Sharkey tells the story of a group in South Central Los Angeles that formed 57 block clubs to help clean sidewalks, keep alleyways free of trash and watch out for drug dealing and other criminal activity.

Third, the city should keep an open mind about installing more security cameras and other monitoring devices that might help prevent and solve crimes. Police can’t be everywhere. Cameras (with the proper privacy protections) can give them eyes on the street.

The most important lesson from Uneasy Peace is a simple one: With determination, leadership and ingenuity, violent crime can be beaten. The New York of 2,000 murders is only a nightmarish memory now.

Mapping shootings across the city of Toronto
July 5, 2018 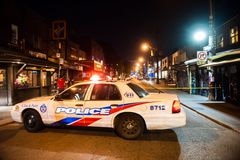 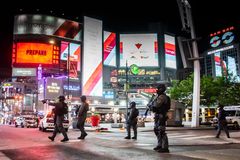 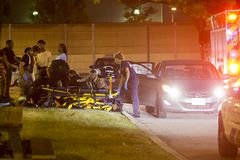