Jennifer Keesmaat stood in the middle of her kitchen on a Friday night in July, among the debris of a half-done reno, and began to address her hastily assembled campaign team. She made her snap decision to run for mayor just hours earlier, registering minutes before nominations closed. Now, surrounded by walls covered in carpenter’s pencil marks where cupboards should be, she addressed the mix of left-leaning city councillors and NDP and Liberal strategists gathered in her red-brick midtown home.

At one point breaking into tears, Ms. Keesmaat said she had taken the plunge in the wake of Mayor John Tory’s “tepid” response to Premier Doug Ford’s sudden unilateral move, unveiled that day, to cut Toronto’s council almost in half. The city, she said, now needed bold new leadership.

“It was something that accumulated,” Ms. Keesmaat said in an interview this week, noting that speculation about her running had waxed and waned for months. “It was a moment where I was like, this has to happen.”

Like her kitchen, however, her campaign to unseat Mr. Tory remains a work in progress. It suffered from a slow start, as her team was assembled from scratch and her platform drawn up on the fly. The courtroom drama over Mr. Ford’s intervention in the city’s election sucked up much of the oxygen when her bid was still in the starting gate. Her opponent, who enjoys a 30-point lead in the polls and used a three-month head-start to raise a war chest of more than $1-million, refuses to debate her one-on-one. While she insists otherwise, her policies have so far been designed to appeal largely to progressive voters in the central city, leaving the vast suburbs to Mr. Tory. And now, with two weeks to go before the Oct. 22 election, time is running out.

But the 48-year-old Ms. Keesmaat, an avid cyclist and runner who once put in a qualifying time for the Boston Marathon, is not the type to give up easily.

“I have hit the wall in a marathon, which is something that you cannot understand intellectually,” she said in wide-ranging interview over a latte at a downtown coffee shop. “It’s the moment when there’s nothing left, but you have to keep running.”

For months, it was assumed that Mr. Tory would face no big-name challenger, from left or right. That changed on July 26, as word began to leak out that Mr. Ford planned to chop council from 47 to 25 wards, even with the election well under way.

The mayor’s reaction – a futile plea for a referendum, and his acknowledgement that the Premier had mentioned the idea in an “offhand” conversation weeks earlier – was seen by some critics as a capitulation. It prompted council’s NDP-dominated left-leaning bloc to lash out against Mr. Tory. They began scrambling to find a mayoral challenger who they felt would stand up to Mr. Ford, with a 2 p.m. deadline on July 27 looming.

Leaving a downtown meeting that Friday morning, Ms. Keemaat checked her phone to find it buzzing with messages from figures on council’s left, urging her to run. So she rode her bike over to City Hall. The signatures on her nomination papers included several left-leaning councillors and their aides. Her new employers, who had brought her on just months earlier as the chief executive of a developer-driven affordable-housing initiative, found out only that day she was jumping into the race.

Raised in Hamilton’s suburban West Mountain neighbourhood, Ms. Keesmaat was one of four daughters born to Dutch immigrants, her father a builder and her mother an art teacher. Moving to Vancouver in the mid-1990s, she became involved in politics of the Downtown Eastside and the issue of gentrification, and got interested in urban planning.

She graduated with a masters in planning from York University’s faculty of environmental studies in 1999. While a student she worked as intern in the office of NDP city councillor Joe Mihevc, who remembers her as a go-getter with “political instincts.” With her husband, Tom Freeman, she launched a charity that ran a west-end restaurant that employed at-risk youth, all while still at York.

She then co-founded a small planning firm, the Office for Urbanism, which won the contract to redesign the master plan for Union Station in 2004. After merging with some other firms to become a consultancy with hundreds of employees called Dialog, Ms. Keesmaat and a colleague were put in charge of its planning business, working on projects across Canada. The firm now has more than 700 employees and offices in Toronto, Edmonton, Calgary, Vancouver and San Francisco.

But she left her private-sector gig in 2012, selling her stake in the business to take a job few other qualified candidates could stomach, after at first turning it down herself: chief planner of the city of Toronto during the tumultuous term of mayor Rob Ford.

She was certainly a different breed of chief planner. Using Twitter and her blog, she spoke out on issues in a way few senior Toronto bureaucrats had done since before amalgamation. She became the face of the fight for bike lanes and mid-rise development, a kind of patron saint for downtown progressives.

But her outspokenness also got her into trouble. Almost from the start, she alienated even potential allies on council when she tweeted in 2012 that she found the chamber’s debates “insufferable.”

In 2015, her very public advocacy for tearing down the eastern chunk of the elevated Gardiner Expressway would put her at odds with Toronto’s next mayor, Mr. Tory, almost costing her her job. It also prompted the mayor’s controversial adviser, Nick Kouvalis, to muse on Twitter that Ms. Keesmaat was plotting a mayoral bid. Hauled into a meeting with Mr. Tory, she says she reluctantly agreed to tone it down.

Her approach also alienated some inside city hall. Her critics say she at times refused to perform acts of diplomacy required to get fellow bureaucrats to buy into her ideas, preferring lecturing to listening.

“Jennifer Keesmaat doesn’t play well with others,” said Councillor Denzil Minnan-Wong, one of Mr. Tory’s deputy mayors and a frequent critic of Ms. Keesmaat and her policies. “It was always Jennifer’s way or the highway.”

Ms. Keesmaat acknowledges that her public advocacy and uncompromising approach ruffled feathers at city hall. But she says she had a great working relationship with fellow department heads.

But it was a lack of leadership from Mr. Tory at the top that left her and other senior staff shaking their heads, she said, noting several senior officials, including herself, TTC CEO Andy Byford and city manager Peter Wallace, left on this mayor’s watch.

“The frustration that I felt was not uncommon,” she said, citing things such as Mr. Tory’s fixation on his now-diminished SmartTrack transit plan, which she dismisses as a mirage. “The frustration was palpable. It was every day.”

Asked about her legacy as chief planner, she points to the sensitive residential redevelopment of the site of discount retail icon Honest Ed’s, approved in just 18 months after extensive consultations with the local neighbourhoods.

She dismisses complaints from developers that the new TO Core downtown plan she championed is too restrictive on new residential development, arguing that without rules, more profitable condos would muscle out office and retail uses. And she bats away concerns that Toronto’s development-approval process remains delay-plagued and Kafka-esque, saying under her direction, city planners started fast-tracking good development proposals and letting lousy ones languish.

The mayoral campaign got heated quickly. Within days, Mr. Tory and his proxies seized on Ms. Keesmaat’s tweets appearing to call for Toronto’s “secession,” something she has repeatedly said was not a policy position, but an expression of frustration with Mr. Ford. And Mr. Tory’s campaign also repeatedly labelled her as the “NDP candidate,” even though Ms. Keesmaat is not a member of any party.

For her part, she called Mr. Tory a ditherer just days after the campaign got under way.

Given how well the NDP did in Toronto in the June 7 provincial election, being tarred as orange might well be an advantage.

But Ms. Keesmaat and her team are eager to portray themselves as a broad coalition mostly of Liberals and New Democrats. Former federal NDP leadership contender Brian Topp, who also served on Prime Minister Justin Trudeau’s NAFTA advisory panel during the tense trade talks, is the campaign manager. But former provincial Liberal aides are also involved.

Her pledges to tear down the crumbling elevated eastern Gardiner Expressway, build 10 times the number of affordable homes the city approves now each year and seek provincial permission to levy a special tax on $4-million mansions are clearly geared to attract progressive voters in the former city of Toronto and up the Yonge subway line.

Municipal political strategists call it the “inverted T,” and it is this same group that largely turned to Mr. Tory in 2014, to block Doug Ford, then his rival for mayor. She has only rarely staged campaign events in the suburbs.

Speaking to The Globe and Mail’s editorial board on Friday, she actually thanked Mr. Tory for being a calming influence after the chaos of the Rob Ford years. But she said Toronto now needs bolder action, particularly on affordable housing, as many residents fear their children will not be able to afford to live here.

“Remember, we were on late-night comedy shows the world over," Ms. Keesmaat said. "Mr. Tory came in as the sort of voice of reason. But there are huge things that we could be fixing right now and they are huge missed opportunities. And I don’t think we can wait another four years.” 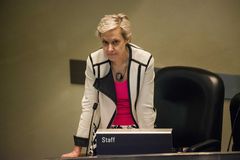 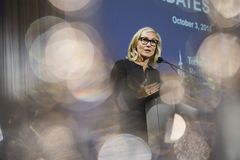 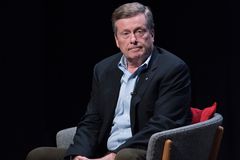