When the Women Recovering from Abuse Program first launched in Toronto, one of its founders, Eva-Marie Stern, worried the program was unsustainable: There weren’t enough participants to fill it.

Today, as the program approaches its 20th anniversary in July, the “endless” waiting list signals just how far it has come – even if the high demand for its services is “overwhelmingly sad,” Ms. Stern says.

WRAP, an intensive group-therapy program at Women’s College Hospital, is designed to help women who have experienced physical, emotional and sexual abuse and neglect in their childhood. Ms. Stern, an art therapist in the program, says that while conventional treatment tends to treat the symptoms of the trauma, such as anxiety or depression, WRAP aims to address the trauma itself, the root cause of the symptoms.

Trauma can have a terrible effect on the lives of those who have experienced it. “It cripples people. Most can’t work or go to school. They often have very limited social interactions,” says Ms. Stern.

When WRAP started, Ms. Stern says, the standard treatment for people suffering from childhood abuse was hospitalization. Back then, WRAP, which was a five-day outpatient program, was dramatically different from the norm.

The program has evolved into an eight-week, intensive group-therapy program. There are only eight participants at any given moment and the program serves approximately 100 women a year. Ms. Stern says WRAP is only meant to be the first step toward overcoming trauma.

Dionne Frost was a patient in the program in late 2004. “It helped me to realize that what happened to me then isn’t who I am now,” she says. She also learned new coping strategies and how to set and maintain boundaries with others.

Ms. Frost spent much of her childhood in foster care or with children’s aid. She was released from children’s aid at 16 and ended up going to college as a mature student and becoming a nurse.

“After living a pretty good life for a few years,” Ms. Frost says the symptoms of her post-traumatic stress disorder became too much. By the time she took part in WRAP, she had developed problems with substance abuse and had suicidal thoughts.

In September, WRAP will serve as a model for a new mental-health day hospital at the Jewish General Hospital in Montreal. Dr. Zoe Thomas, a psychiatrist doing a fellowship with WRAP, is bringing the program to Montreal. She says she’d like the day hospital to provide trauma-focused treatments to those who need it. She says there is very little trauma-informed therapy available in the city, but that there is a “tremendous” need for it.

In the age of #MeToo, Ms. Stern thinks both the therapists and the patients in the program feel more validated and respected. “But,” she adds, “it’s not about being believed now, it’s about how they weren’t believed as children.”

She thinks recent high-profile child-abuse stories in the news have also highlighted the importance of the program, because they have “lifted the veil” on the severe abuse that can happen to children.

“It has helped our patients and it helps us as a program as well, to be believed and respected,” says Ms. Stern.

But even now, she says, “the medical world is not trauma-informed enough.” She says the psychiatrists that she sees coming through the program as part of their training have often never been taught about treating trauma.

Now a mother of two young daughters, Ms. Frost is working on a book of humorous and thoughtful stories from her life and working with clinics in the city to begin developing a program dedicated to the aftercare phase of trauma therapy.

Ms. Stern says that, as patients reach the end of the program, she considers it a success when “someone who comes into WRAP afraid [and] leaves feeling hopeful. When she knows that it’s not her fault and she has the tools to attend her own success.”

Study calls for closer evaluation of pregnant women who have had previous C-sections
May 7, 2018 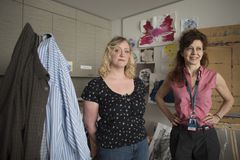