In the years before he drove a speeding van through throngs of people on a busy Toronto street, killing 10 and injuring many others, Alek Minassian found a community of like-minded people through online “incel” message boards, including two mass killers with similar misogynist ideologies.

He detailed his connection to these men, and the inspiration he drew from them, in a videotaped police interview after his arrest on April 23, 2018. Dressed in a white prisoner’s jumpsuit, Mr. Minassian told Toronto Police Detective Rob Thomas about the motivation for his attack, and his desires to “inspire an uprising.”

He tells the detective the only reason he halted the attack was that someone’s drink had hit the windshield and reduced visibility, and that his goal had been “suicide by cop.”

A transcript and a video of that interview – which stretched from 10:46 p.m. to 3:04 a.m. the next day – were made public on Friday, providing a glimpse into the mind of Mr. Minassian, then 25, at the same time the city was coming to grips with its largest-ever mass killing.

Mr. Minassian, who faces 10 charges of first-degree murder and 16 of attempted murder, is scheduled to stand trial in February, 2020. He will be tried by judge alone. The judge who ordered the transcript and video released said Mr. Minassian has not disputed that he was driving the van that day, and that his trial will focus on his mental state at the time of the attack.

In Mr. Minassian’s recollection, his anger toward women began with a humiliating encounter at a Halloween party in 2013, in which girls he’d attempted to strike up a conversation with laughed at him.

He insisted that he had a normal childhood and adolescence. He told Det. Thomas he got along well with classmates at school, where he was a self-described nerd, and with his family at home. He didn’t have problems with the other kids, he said, or even with girls. But at that party, he recalled that the laughing young women had put their hands on the arms of the “big guys” they were with. He was furious.

“I consider myself a supreme gentleman,” he explained. “I was angry that they would … give their love and affection to obnoxious brutes.”

A friend from Seneca College of Applied Arts and Technology, where Mr. Minassian was studying software development, introduced him to online message boards, where he discovered peers who felt the same way. The group described themselves as incels; a women-hating collective of “involuntarily celibate” men who promote a misogynist ideology as a result of their frustrations with society and – as Mr. Minassian put it – “being unable to get laid.”

The ultimate targets of the incels’ anger are “Chads” and “Staceys” – sexually active men and women who they believe have been rewarded by unfair social standards. The incels feel that they – the “beta males” – have been punished by those same societal standards.

One of the people Mr. Minassian said he encountered on those message boards was Elliot Rodger, considered the forefather of the incel movement. The two connected over Reddit in January, 2014, he told police, when both were 22, he under the username “Xboxlightside” and Mr. Rodger under the username “Valtharion.”

Mr. Minassian recalled learning on the evening news in May, 2014, that Mr. Rodger had opened fire on students at the University of California, Santa Barbara, killing six people and then himself. Mr. Rodger had posted a video online calling his attack “retribution” against the women who had rejected him, and for “all you men for living a better life than me.”

Around then, Mr. Minassian said, he began to feel radicalized. He started daydreaming about his own “rebellion.”

Another user Mr. Minassian said he chatted with was Chris Harper-Mercer, who used the name “SpaceRobot.” Believed to have been inspired by Mr. Rodger’s attack, Mr. Harper-Mercer shot up a community college in Roseburg, Ore., on Oct. 1, 2015. He killed 10 people and wounded seven others, then turned the gun on himself.

In 2017, Mr. Minassian joined the military with a goal of learning how to use weapons, “specifically large guns … such as assault rifles.” But after 16 days of standard basic training in Saint-Jean-sur-Richelieu, Que., the Canadian Armed Forces later confirmed, he asked to be voluntarily released. He never received weapons training. Instead, he said, he satisfied his urges on the TV screen as a “hard core gamer.“ He estimated his average playing time at five hours a day and said he particularly enjoyed violent video games such as Halo.

By April, 2018, Mr. Minassian said, thoughts of an attack had begun to consume him.

“I was thinking that I would inspire future masses to join me in my uprising as well,” he said.

The day before, or maybe two days before, he said, he signed on to 4Chan. In coded language, he said, he wrote “there will be a beta uprising tomorrow, I encourage others to follow suit.”

He recalled that “quite a few” people congratulated him. Although his message was cryptic, “I suspect they probably knew what I meant by what I said.”

A man in London, Ont., has been charged with threatening to cause death to unknown persons in a case that may have been inspired by the Toronto attack, the judge in Mr. Minassian’s case noted.

Mr. Minassian said he booked the van about a month before the attack. He called Ryder Truck Rental and said he needed a vehicle to help a friend move some furniture. He reserved it for April 23, when the final exams in his bachelor of software development program would be over.

On that day, he woke at about 7 a.m. He ate breakfast, brushed his teeth and checked his e-mails to see if he had any job offers. Then he went on a walk around his neighbourhood to clear his mind. When he returned home, he played computer games.

“And then I went to the Ryder location … and took the van … and brought it out to Toronto and then I committed this rebellious act,” he explained to Det. Thomas.

He initially said he took a bus from his home in Richmond Hill, Ont., to the car-rental outlet. But he eventually admitted his father dropped him off nearby. He’d told his dad he was meeting a friend for coffee. He’d lied to police, he explained, because he was worried they would think his father was an accomplice.

Before he pulled out of the parking lot shortly after 12:30 p.m., Mr. Minassian posted to Facebook from his phone: “the incel rebellion has begun.” He praised Mr. Rodger. (Facebook took down the post and deleted Mr. Minassian’s account minutes after learning of the attack.)

And then he started driving. It took 20 to 30 minutes to reach Yonge Street and Finch Avenue. He didn’t select the intersection ahead of time. He just knew Yonge would be busy, and when he pulled up to a red light, he saw a group of pedestrians.

“And I decided to just go for it,” he said. As soon as the light turned green, he floored it into the crowd, continuing for several blocks.

“To be honest, the only reason I stopped my attack was because someone’s drink got splashed on my windshield,” he said. “I wanted to do more, but [I’d] kind of been foiled by a lack of visibility.”

By that point, he could see police cars closing in on him. He turned right onto a side street and got out of the van. An officer approached with his gun drawn and Mr. Minassian pulled out his wallet, pointing it at him and hoping it would be confused for a weapon. He yelled that he had a gun.

“Even beforehand, I premeditated [this] as an attempted suicide by cop,” he explained.

“He unfortunately didn’t react,” Mr. Minassian said. The officer ordered him to the ground and he obeyed.

“If I’m going to live, I’d rather not encounter a physically painful experience, so I decided I have no choice but to admit defeat at that point.”

Hours later, in the interview, Det. Thomas asked Mr. Minassian how he was feeling.

“I feel like I accomplished my mission,” Mr. Minassian said.

Det. Thomas asked him what he would say to the families of the victims if they were in the room with them. Would he apologize? 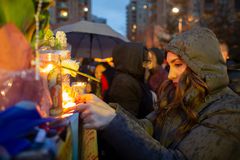 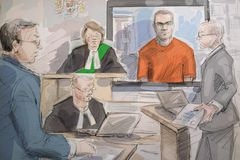 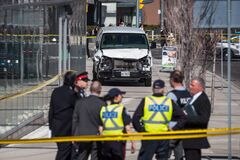