One weekday afternoon in July, Jane Auster and Andy Gort picked their way through the side streets of a neighbourhood that has become ground zero in Toronto’s struggle to reconcile high-density development and livability.

The landscape near Yonge and Eglinton – once dubbed “Young and Eligible” – is nothing if not urban: The sidewalks at this hour teem with people on their way home, passing development sites, new apartment towers and concrete mixers.

Produce flies off the stalls of a local grocer, while the patio of a bar next door is filled with happy-hour patrons.

Ms. Auster, a writer, paused near the Art Shoppe condo project and squinted at a crane far overhead. “Look, Andy,” she said, “they’ve topped out.”

Activists with the South Eglinton Ratepayers’ and Residents’ Association (SERRA), Ms. Auster and Mr. Gort, a retired tech manager, have been engaged for years in a block-by-block struggle to rein in a seeming torrent of development – 21,000 new dwelling units for the Yonge-Eglinton-Davisville corridor approved or under way since 2016 alone. If development is allowed to ramp up, Mr. Gort fears that number could balloon to closer to 40,000 units. He likens the pace of change to “a runaway train."He likens the pace of change to “a runaway train.”

Such grievances are familiar fare among the homeowners living in North Toronto’s leafy enclaves: that the city, in its zeal to intensify, has failed to invest in schools, pools, parks and pipes, the infrastructure needed to accommodate so many new people. “We’re packed,” said former city councilor Karen Stintz, who lives in the area and grapples with jammed rush-hour subways and clotted side streets. “At some point, you have to ask, `When is enough, enough?’”

Towers have sprouted rapidly from the grassy moats surrounding older apartment buildings. The Crosstown LRT construction has transformed the Yonge and Eglinton intersection into a warren of barriers and tunnels. In coming years, most of the 1960s-vintage mid-rise offices on Eglinton East will be replaced by 50-plus storey condo towers – a transformation that could lead to a loss of local white-collar employment not foreseen in the city’s official plan.

To confront the mounting pressures, planners, developers and residents’ groups spent six years hammering out a long-term growth plan. “Midtown in Focus” called for new open spaces, amenities and prescriptive rules that capped development while establishing height transitions between main and side streets.

Last year, council approved Official Plan Amendment 405, which codified all that horse-trading, and shipped it to Queen’s Park for approval. But earlier this summer, the Ford government sent back that meticulously finessed plan, along with orders to council to edit out the caps, some of the height limits and the restrictions on what can be built where.

For all the political push-back, many the area’s thousands of apartment dwellers have a far more benign view of their ‘hood. “I love the area,” said Denise Stewart, who has lived in an apartment on Davisville Avenue for 30 years. “It’s cozy, it’s safe. You’ve got everything right here.” Others agree. The area is crowded but “pretty pleasant,” said Chris Mortensen, a GO conductor who lives in a new high-rise rental on Balliol Street and walks his Bernese on the Beltline. “Everyone seems to get along.”

What developers know is that this sense of urban convenience sells, and sells very well. “There’s always been a recognition that Eglinton has been the middle of the city,” commented Ed Sonshine, chief executive of RioCan Real Estate Investment Trust, a developer whose headquarters are in the Yonge Eglinton Centre, a 1970s mixed-use complex.

Apart from downtown and North York city centre, the Yonge-Eglinton-Davisville corridor – denoted as an “urban growth centre” since 2006 on the official plan – is unique in terms of the concentration of the investment activity, especially in comparison with the generally low-rise neighbourhoods abutting the vast majority of the city’s other subway stations. As Mr. Gort said dryly, there’s nothing like this at Yonge and Lawrence, just one stop north.

After the subway opened in 1954, chief planner Matthew Lawson pressed ahead with plans to develop rental apartment buildings near Eglinton, the terminus station at the time. Those 20-storey towers were to be collared by generous green lawns. (Fifty years later, those lawns have become prized development sites for property management giants Greenwin Inc. and Shiplake Properties.)

During the early 1960s, row houses on side streets like Keewatin Avenue, Balliol Street and Roehampton Avenue “were mowed down” to make way for modern slab apartments with virtually no public consultation, Mr. Crombie said.

But by the late 1960s, when a builder assembled a large parcel a few blocks north-west of Yonge and Eglinton for a luxury high-rise, North Toronto residents were ready to push back.

This was the era of Jane Jacobs and Stop Spadina, and ratepayer activism, then considered a progressive political force, was in the ascendancy. One North Toronto homeowner group dubbed the proposal, to be located at 500 Duplex Ave., “an obscenity.”

The narrative of homeowner opposition to development has been hardwired into North Toronto’s political personality ever since, from the 1980s campaigns to block mid-rise apartments on Yonge north of Eglinton to the strenuous fight to stop two Minto towers, approved in 2003 on a former government site just south of the intersection. More recently, locals fought a plan by RioCan to replace a forlorn concrete plaza in front of its Yonge Eglinton Centre with a three-storey retail complex topped by a publicly accessible terrace.

The Minto battle gave rise to the Federation of North Toronto Residents’ Assocations (FONTRA), which today has about 30 member associations representing homeowners from Bloor Street north to Sheppard Avenue, and from Bathurst Street over to the Don Valley. The group brings people together for a wide range of development struggles, from large planning exercises to localized NIMBY-ish conflicts.

The irony, of course, is that almost all the high-profile projects that drew the ire of residents’ groups got built. And life went on.

“Their job is to oppose everything,” Mr. Sonshine shrugged. Ms. Auster and Mr. Gort insisted their group isn’t opposed to more people or tall buildings per se, but rather aims to press both the city and builders about the lack of public investment in physical infrastructure, platform capacity at the Eglinton subway station, sufficient open spaces and additional amenities. Said Mr. Gort: “We want a library, we want a couple of non-profit day-cares, an agency for new immigrants, stuff like that.”

All worthy goals, but what’s impossible to ignore is the fact that families, young people, newcomers and retirees have continued to flock to – and invest in – both the area’s vertical and horizontal neighbourhoods, despite years of dire warnings about over-development.

During the drawn-out Midtown in Focus negotiations, residents’ associations urged planners to calculate the “cumulative” impact of all the proposed development instead of simply assessing each project individually.

When, they asked, will Yonge and Eglinton reach a saturation point?

All those who aspire to live in midtown, with its locational conveniences, might pose a very different question: How soon, they wonder, can we move in?

Editor’s note: An earlier version of this article incorrectly said there have been 50,000 new dwelling units for the Yonge-Eglinton-Davisville corridor approved or under way since 2016. In fact, the number is 21,000. This version has been corrected.

A look at Toronto’s murals and the messages behind them
August 5, 2019 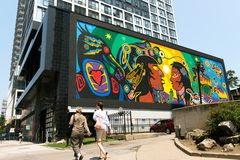 As they set out to find Toronto’s best playgrounds, Danforth Dad views the city through the eyes of his children
August 2, 2019 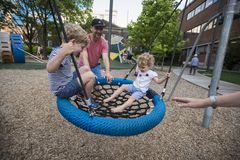