A prominent anti-black racism researcher is pushing an Ontario school board to reconsider teaching To Kill a Mockingbird – reigniting a debate about the educational value of literature mainstays and introducing voices that reflect a diverse student population.

Trustees at the Peel District School Board, west of Toronto, received a report last month that made 10 recommendations on how to support black students in school, including a suggestion that they rethink whether texts such as To Kill a Mockingbird “should continue to be taught at all.”

Carl James, a York University professor who has published several papers about anti-black racism in education, said in an interview that his recommendation does not involve banning books, but rather thinking critically about required-reading texts such as the 1960 novel by Harper Lee.

“A text that we might have used many years ago to portray certain kinds of people, today might not be useful. So why couldn’t we raise these questions and give this kind of critical analysis to To Kill a Mockingbird?” Dr. James asked in an interview.

Dr. James said the book’s frequent use of a racial epithet lends legitimacy to the word particularly in the absence of critical analysis in terms of the historical context, who is using the word and its effect on learners. He said there are other books that better engage students in dialogue around racism.

Many school boards across North America have increasingly started examining their English curriculums to develop culturally relevant lessons. But the measures have also given rise to tensions. A story in The Washington Post in 2015 detailed how a teacher in an inner-city school in California no longer wanted to teach Shakespeare because she believed it did not speak to her ethnically diverse class. Another teacher responded that shared skin colour does not equal shared experiences, and that Shakespeare still spoke to the human condition.

From the archives: No, To Kill a Mockingbird shouldn’t be taught in 2018

From the archives: Ontario school board demands that To Kill A Mockingbird be taught only through an ‘anti-oppression lens’

From the archives: Stratford’s powerful To Kill a Mockingbird delivers a built-in rebuttal

The Peel school board sent a memo to English department heads two years ago asking them to explore culturally relevant texts, including A Fine Balance by Rohinton Mistry, Richard Wagamese’s Indian Horse and Noughts & Crosses by Malorie Blackman, after hearing from its students that their experiences were not being reflected in classroom literature. Then last June, the board went a step further and wrote that To Kill a Mockingbird should not be taught in high schools, “unless instruction occurs through a critical, anti-oppression lens.” It included a compendium document as a guide to help students analyze the book from a different point of view.

Students in Ontario are required to take an English course every year of high school.

Dr. James’s report included interviews from focus groups of black students who expressed challenges they encountered, including their frustration with teachers and administrators not doing enough to address issues of anti-black racism. The school board had tasked Dr. James with measuring the progress it had made in addressing anti-black racism and supporting students, particularly black males, since it established an action plan in 2016. While Peel said there is still work to do, it has also moved to train staff and has formed a number of black-student advisory councils in middle and high schools.

Poleen Grewal, the board’s associate director of instruction and equity support services, said having English departments consider whether To Kill a Mockingbird is an appropriate text used by teachers in their classrooms is part of the action the board has taken. The number of teachers who are having the novel studied by their whole class this coming school year has dwindled, to around four to six.

The book uses the racial epithet a number of times that is “hurting and harming black kids," Ms. Grewal said, adding that the black character, Tom Robinson, is one dimensional, unlike, for example, Aminata Diallo in Lawrence Hill’s The Book of Negroes, who is strong and resilient.

“To Kill a Mockingbird, at one point, might have been an important text. But part of education and part of living is that we learn and grow, and now that book doesn’t have the same level of credibility and respect that it once did because we know better,” Ms. Grewal said. “And when we know better, we’ve got to do better.”

Nokha Dakroub, a trustee at the board, had put forward a motion in April that the book no longer be required teaching material at high school. The motion was defeated. Some trustees at the meeting said it was not up to them to decide which books are used in the classroom. Others argued that the book taught lessons on not being a bystander.

Ms. Dakroub said she was still debating whether to reintroduce her motion in light of Dr. James’s findings and recommendations.

“This isn’t about book-banning,” Ms. Dakroub said. “We are trying to prepare our students for the future. We’re not trying to prepare them for the 1960s. Some of the work we do around that requires us to look at what we are teaching in classrooms. … If it causes harm to one person or one student, then it’s already a problem.”

Ontario school board demands that To Kill A Mockingbird be taught only through an ‘anti-oppression lens’
October 21, 2018 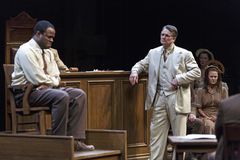