Cannabis legalization is coming to Canada on Oct. 17, and whether you plan on smoking up or not, it’ll change the way you live. Businesses across the country, from growers and retailers to the tech and tourism sectors, are preparing to reap a windfall from legal marijuana. But Canadians also face difficult questions about cannabis use in the workplace, in their homes and among their friends and loved ones.

Globe and Mail journalists have been documenting Canada’s preparations for legalization day, and the possible future that comes after. Our cannabis portal and premium newsletter, Cannabis Professional, are good places to get caught up and stay informed once legalization is here. Here’s an overview of some of the major issues to get you ready for the 17th. To keep up with developments in the days after legalization begins, check here.

I want to know ... • Where to buy it • What’s going on in Ontario • Where the black market begins • How to invest in cannabis • How to start a cannabis career • Can I get high at work? • How to get a healthy high • How to talk to my kids

Where to buy it

When the federal government legalized cannabis earlier this year, it left the provinces in charge of how the drug will be sold and where consumers can smoke it. Some things are mostly constant across the country: You can’t buy cannabis if you’re under 18 (though you may have to be 19 in some provinces), you can grow up to four plants at home (except in Manitoba and Quebec, where you can’t) and you’ll be able to carry up to 30 grams outside your residence.

When it comes to buying the stuff, though, it’s a mixed bag. Manitoba’s stores and online sales will be exclusively private; retailers in New Brunswick, Nova Scotia, PEI and Quebec are exclusively government run; Alberta has private retailers, but government online sales; and B.C. is a mix of everything. (We’ll get to Ontario in the next section of this guide.) And when it comes to smoking outside your home, the rules will generally be close to the local tobacco-smoking laws, but some places won’t let you smoke in your car or near places where children play.

Here’s a full primer on how the provincial rules differ. For the latest news on planned changes to your province’s laws, check the laws and regulations page of The Globe cannabis portal. 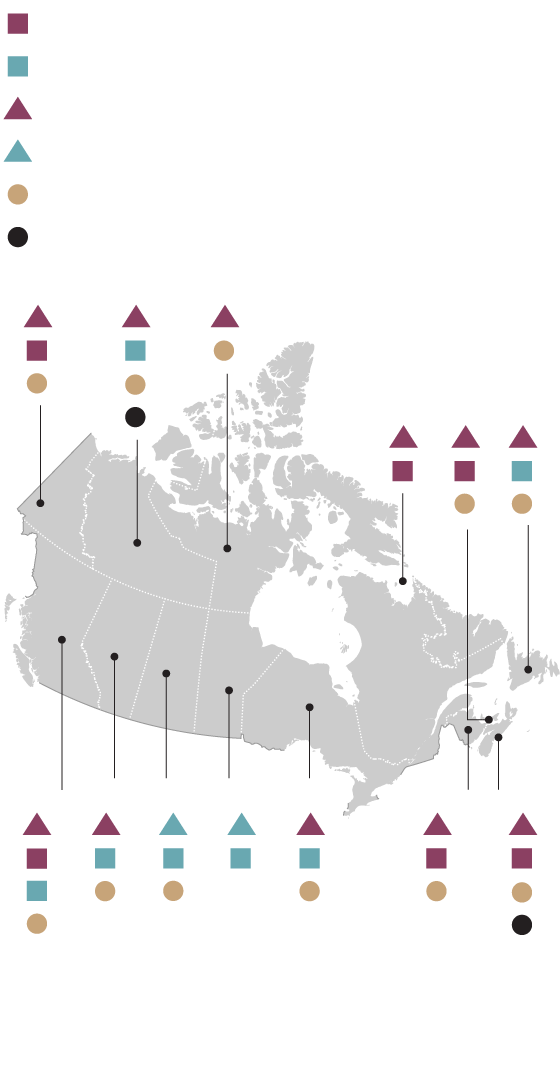 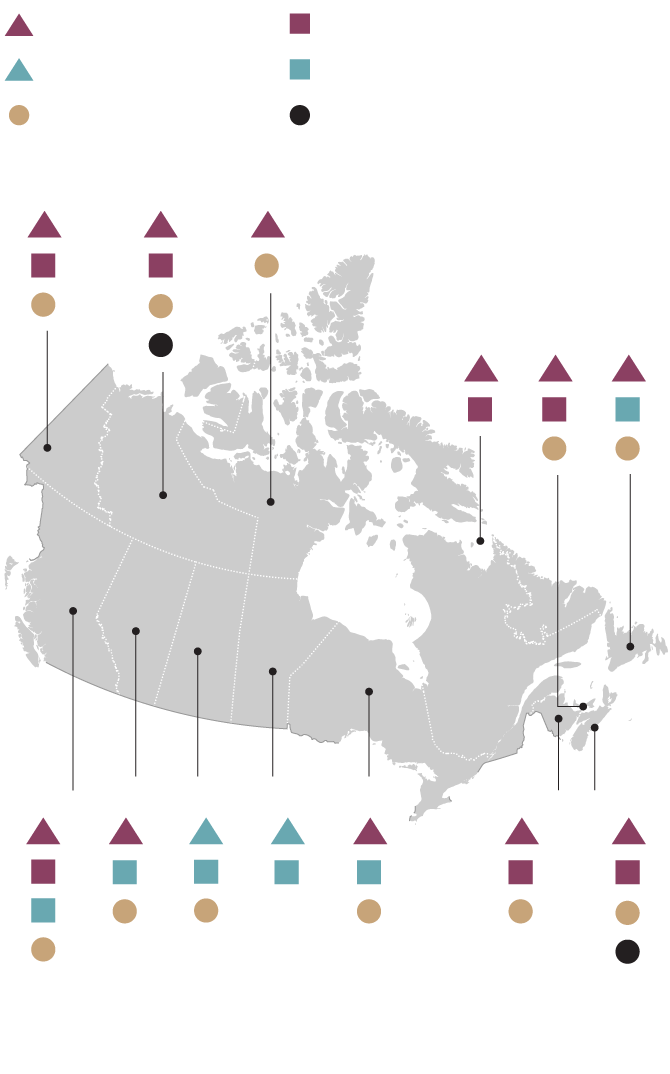 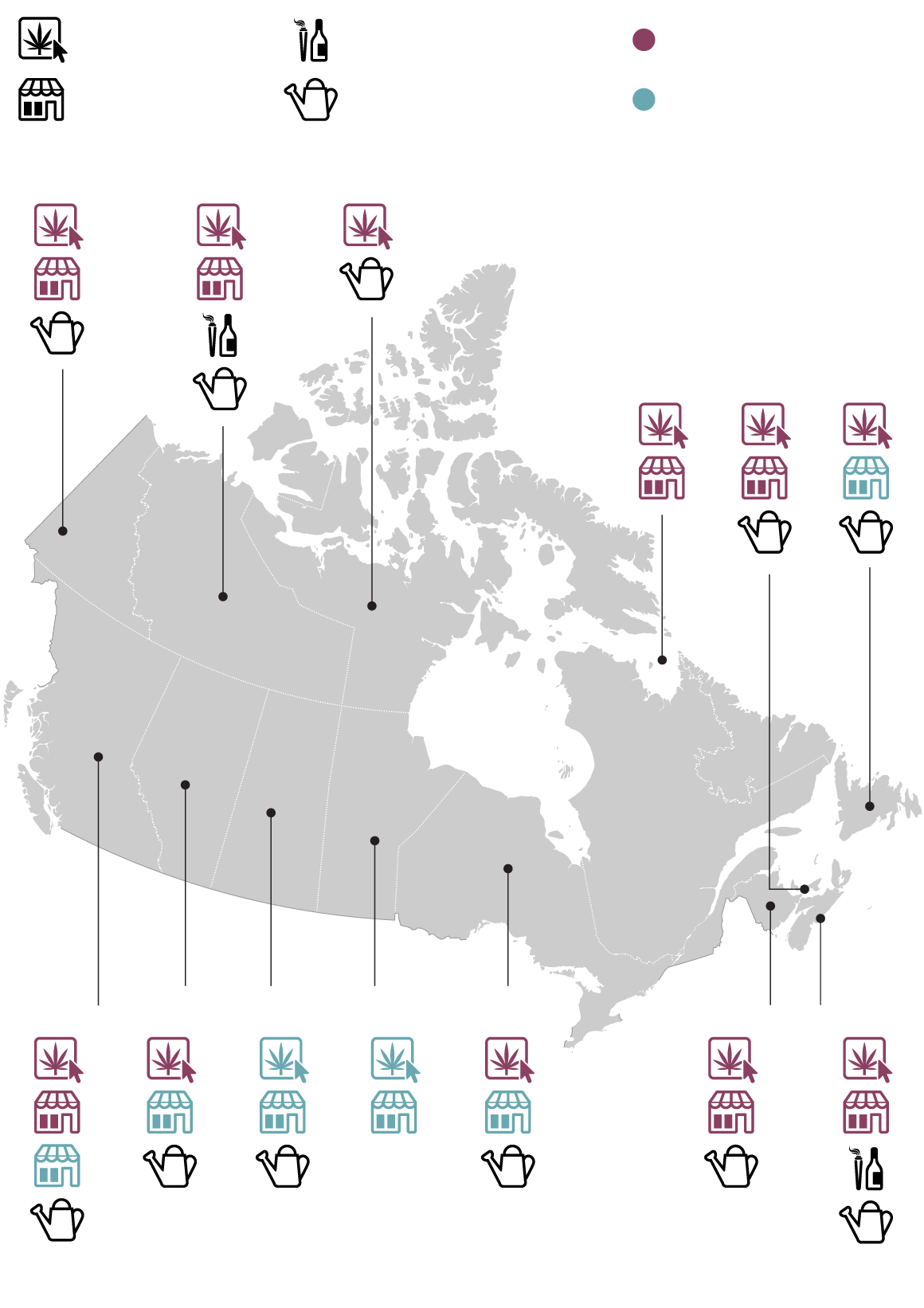 Is there enough legal cannabis to meet demand? Here’s what the numbers say

A consumer’s guide to cannabis basics

Hey, hey, got the pot-induced munchies? Here are some fast-food options to sate your cravings


What’s going on in Ontario

Canada’s most populous province – and, by extension, the biggest potential market for cannabis consumption – will be among the least prepared for legalization day, which is why we’re giving it its own section here.

Originally, premier Kathleen Wynne’s Liberal government created a new wing of the LCBO, the provincial liquor agency, that would be in charge of cannabis sales. Then Ontarians elected Doug Ford’s Progressive Conservatives, who instead decided private retail was the way to go.

How many stores will there be? What cities will they be in? We don’t know that yet: The government won’t have a framework ready until April, and Ontario’s cities – which are holding municipal elections on Oct. 22 – get a one-time window to decide if they want pot stores locally. So on Oct. 17, Ontarians can buy online through the government retailer, but not in bricks-and-mortar shops.


Where the black market begins

The legalization covers fresh and dried cannabis, and weaker kinds of cannabis oil, but not concentrates, extracts or the edible products that can be made from them. Ottawa says it will figure out a regulatory framework for edibles within a year, but for now, the businesses selling them are still grey-market at best. That isn’t deterring the Canadian purveyors of “shatter” – mechanically extracted cannabis oil that’s been concentrated into a hard substance – and the big businesses eager to sell their products once they’re legal.

The other open question is what will happen to Canadians who were convicted of pot dealing or possession when that was still illegal. Such convictions disproportionately fell on black and Indigenous Canadians. Some groups are calling for a general amnesty, or a preferential licensing system to help those harmed by prohibition to transition into legal businesses.

The oil barons of cannabis: Inside the illicit but lucrative world of ‘shatter’

What is craft cannabis and how will it fit into the legal market?

The problems – and opportunities – of the cannabis edibles market

Opinion: Without easy retail access to cannabis, the black market will thrive

Opinion: How cannabis equity can help make up for the racism of the War on Drugs


How to invest in cannabis

Cannabis has been a big business in Canada even before legalization: By Statistics Canada’s estimates, 4.9 million Canadians spent about $5.7-billion on cannabis in 2017. Reaping the rewards won’t be easy for producers, retailers or other businesses who have to navigate the new legal landscape, but investors are already fighting for a stake in the companies getting ready for legalization.

To help investors and businesses make sense of the post-legalization world, The Globe has launched Cannabis Professional, a premium business-to-business news service. The Globe’s cannabis portal also has in-depth coverage of investing, retail and small business and the consumer side of the pot market.


How to start a cannabis career

If your idea of “the cannabis industry” is grow-ops and teenage pot dealers on streetcorners, think again. Every sector of Canadian industry has something at stake. Tech entrepreneurs are crafting specialized software to track inventory and co-ordinate sales. Food and beverage experts are being poached to work at cannabis ventures. Tourism companies are hiring guides to shepherd around foreign visitors who want to try Canada’s newly legal drugs.

Once, this Ontario town made chocolate. Now it grows cannabis. Can its economy be saved?

The rise of ‘weed tech’: Cannabis tech sector flourishes in lead up to legalization

Legal or not, cannabis delivery services prepare for launch

For Canada’s food sector, risk trumps reward when it comes to cannabis


Can I get high at work?

The simple answer is no, that’s not a good idea, especially if your job is dangerous. The complicated answer: Workplaces across Canada will have to rethink their policies about where and how their employees are allowed to use legal drugs. The Cannabis Act didn’t give employers additional powers to impose random drug tests on their employees, as railway and trucking companies had asked for. That leaves companies with tricky decisions about how they define cannabis impairment, how managers should monitor whether employees are fit for work and whether cannabis is allowed at workplace events.

Marijuana and the workplace: Time to reboot our thinking

Eight ways to prepare your organization for the legalization of marijuana


How to get a healthy high

For cannabis novices and experienced users alike, legalization will change the way Canadians consume the drug – and there’s still a lot we don’t know about its long-term effects on human health. Sometimes, heavy-using teenagers develop brain damage and addiction problems, but sometimes they don’t. The study of cannabis and cancer care is still in its infancy. Some lifestyle brands claim cannabis can help women improve their sex lives, but science hasn’t conclusively proved that either.

If you’re already a medical cannabis user, Health Canada has good news for you: The existing Access to Cannabis for Medical Purposes Regulations are staying in place for at least another five years until the dust settles on the legalized retail market.

One of the government’s stated goals is to make sure Health Canada can safeguard the quality of products Canadians buy. But at a certain point, it’s up to you, the consumer. Health-conscious consumers will have to become savvy about how much THC (the compound responsible for a “high”) their cannabis contains, and how much CBD (a compound believed to have therapeutic, but not high-producing, properties) and what dosage and delivery method gets the desired result. Check back at The Globe’s cannabis health page to learn more.

Cannabis and cancer care: What the science says

How does cannabis affect appetite? Here’s what research says about the munchies

What Canada’s doctors are concerned about with cannabis legalization

Some people think they drive better after a joint. The science says otherwise. Here are the facts on driving high


How to talk to my kids

Talking to your children about anything they do, legal or otherwise, requires trust and empathy. Chances are that your kids already know more than you realize about cannabis, gleaning both fact and misinformation from their peers, the internet or popular culture. Set a good example by learning all you can about cannabis consumption and its risk, even if you never plan to partake. Hopefully, some of the resources above will help with that.

Dr. James MacKillop says that talking about cannabis at home should be an ongoing dialogue. He is the director of the Peter Boris Centre For Addictions Research and co-director of the Michael G. Degroote Centre For Medicinal Cannabis Research.

André Picard: Boomers, remember the real – and perceived – harms of cannabis use

Cannabis and the adolescent brain: What science knows, and doesn’t know

Nine harm-reduction points to make with your teen about cannabis

Will it be legal to have cannabis in my car?