Health Canada has suspended CannTrust Holdings Inc.’s cannabis growing and processing licences, dealing a major blow to what was once one of the most prominent and highly regarded marijuana growers in Canada.

CannTrust must stop planting cannabis immediately, and has 10 business days to appeal the suspension. If it fails, the Ontario-based grower could be forced to shutter its massive greenhouse facility and processing plant until federal regulators decide whether to reinstate or revoke the licences.

The move comes three months after federal investigators discovered CannTrust had grown about $51-million worth of cannabis in unlicensed parts of its facility in late 2018 and early 2019.

The suspension is the most significant regulatory action Health Canada has taken since commercial medical cannabis production was legalized in 2014 and recreational cannabis was permitted last October. The CannTrust scandal has rippled through the young industry, denting investor confidence and removing thousands of kilograms of cannabis from the market at a time of shortages in the new legal system.

CannTrust’s stock price dropped 14.5 per cent on Tuesday, to $1.70 a share. The share price has declined 73.7 per cent since July 5, the last trading day before the company announced it had been rated as non-compliant with Health Canada regulations.

Under the licence suspension announced on Tuesday, CannTrust will be allowed to continue cultivating and harvesting existing batches of cannabis, but it cannot plant new batches or sell cannabis. Health Canada may suspend all cultivation, depending on the outcome of any appeal.

“CannTrust Inc. is permitted to take necessary actions to maintain the viability and quality of cannabis plants and cannabis products while Health Canada reviews any representations from the licence holder,” Health Canada spokeswoman Tammy Jarbeau said.

Federal regulators have given CannTrust 10 business days to provide a response “with reasons why the suspension is unfounded,” Ms. Jarbeau said. The company declined to comment on whether it will appeal.

CannTrust said in a news release Tuesday that the suspension notice from Health Canada held out the possibility that the licenses could be reinstated if it changes how it grows and distributes cannabis, “including measures to control the movement of cannabis in and out of CannTrust’s site,” takes steps to recover any illegally grown cannabis it sold and improves its employee training and record keeping.

Robert Marcovitch, CannTrust’s interim chief executive officer, said in an e-mailed statement: “CannTrust’s paramount and urgent priority is to satisfy regulators that the company meets or exceeds all regulatory requirements so that the reasons for suspension no longer exist, we are in a position to resume operations and to regain the trust and confidence of our shareholders, patients, customers and partners.”

Federal investigators, following up on a tip from a former employee, discovered in mid-June that CannTrust had grown thousands of kilograms of cannabis in unlicensed parts of its greenhouse facility in Pelham, Ont. Inspectors later determined that the company had also breached regulations at its manufacturing plant in Vaughan, Ont.

According to internal correspondence seen by The Globe and Mail, several members of CannTrust’s executive team and board – including then-CEO Peter Aceto and chairman Eric Paul – were made aware of the unlicensed growing activity at least seven months before Health Canada discovered the violations. A former Canntrust employee alleged that the company took steps to hide the unlicensed growing operations, including hanging temporary walls to stage photographs that were sent to Health Canada.

After the investigation was revealed, CannTrust halted all cannabis sales, fired Mr. Aceto “with cause” and forced Mr. Paul to resign. The company has since laid off 180 employees, about 20 per cent of its work force, and hired investment bank Greenhill & Co. Canada to conduct a “review of strategic alternatives,” including a possible sale of the company or its assets.

“The market is trying to figure out how much are the assets really worth, how much are they worth without a license, or how much are you willing to discount them, given the fact that you’re probably expecting that they’ll get licensed again in the future, but the timing on that is really uncertain," said Graeme Kreindler, an analyst with Eight Capital Corp.

“Maybe there’s a strategic investment, someone gives the company an injection of cash until they get rehabilitated,” Mr. Kreindler said. “[The] potential for a sale is the more likely event, but won’t be easy.”

Before the Health Canada investigation, CannTrust was widely seen as one of the more sophisticated operators in the cannabis space. Mr. Aceto had been CEO of Tangerine Bank, and the company had partnered with firms such as alcohol distributor Breakthru Beverage Group and drug manufacturer Apotex Inc. In February, it joined a handful of Canadian cannabis companies to list on the New York Stock Exchange.

Alongside the Health Canada investigation, “matters and parties related to CannTrust” are under investigation by the joint serious offences team of the Ontario Securities Commission’s enforcement branch, which is a partnership between the commission, the RCMP’s financial-crime program and the Ontario Provincial Police anti-rackets branch.

CannTrust and several company insiders sold US$195.5-million worth of shares in May using a prospectus that included production numbers from the unlicensed areas. The deal was underwritten by a number of large investment banks, including Bank of America Merrill Lynch, Citigroup, Credit Suisse Securities and RBC Capital Markets.

Opinion
CannTrust has a shot at redemption, but a company breakup is more likely Subscriber content
September 17, 2019 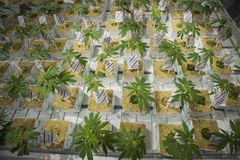 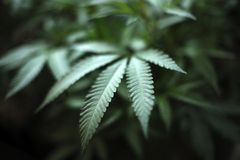 CannTrust and eight energy stocks get booted out of the TSX Composite in index revamp Subscriber content
September 13, 2019 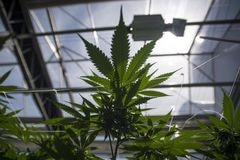