In September, Aphria issued almost $300-million in stock to buy marijuana assets in Colombia, Argentina and Jamaica from a company now known as Sol Global Investments Corp. Last month, New York-based short-sellers Gabriel Grego and Nate Anderson criticized the transaction, alleging that the assets had almost no value and that the deal enriched people with ties to Aphria.

In the wake of the short-sellers’ report, Haywood − which did a formal valuation and fairness opinion for Scythian Biosciences Corp., Sol’s predecessor, as part of the sale to Aphria − sent analysts to visit farms and buildings in Colombia, Argentina, Jamaica and Leamington, Ont. Haywood analyst Neal Gilmer and associate Ethan Spence said Thursday in a report that Aphria’s Caribbean and Latin American assets are “real companies” at “varying level of development.” They added that investors who can stomach some volatility should buy Aphria’s stock at these levels.

Thursday’s Haywood report came on the eve of Aphria’s much-anticipated earnings call on Friday morning. Shares of Aphria fell 2 per cent Thursday to $8.71. Aphria’s stock had been trading below $5 in the days after the short-sellers’ report, tumbling from $10.51 before publication. Investors are still waiting for Aphria’s promised line-by-line rebuttal of the allegations. The company has called the short-sellers' report “false and defamatory.”

Aphria hired Cormark Securities Inc. to advise on the deal and provide a fairness opinion to its board. A copy of that opinion has not been released to the public and neither Aphria nor Cormark released it to The Globe and Mail when requested last month.

Haywood, which was paid $350,000 for its services on the transaction, produced a 36-page valuation and fairness report dated July 16. A version with redactions was made public last summer in regulatory filings. The original report was prepared by Haywood vice-president Mathieu Couillard and was reviewed by managing director Campbell Becher and Mr. Gilmer, who wrote Thursday’s research note. Haywood’s review included site visits to the foreign assets.

The original report pegged fair value for the assets between $180-million and $200-million. At the time the deal was announced, Aphria agreed to pay $193-million for the assets. A rally in pot stocks pushed the price to $298-million. In its fairness opinion, Haywood concluded that Aphria’s offer was fair to Sol.

Mr. Becher didn’t return multiple requests for comment after the short-sellers' report. Mr. Gilmer didn’t return an e-mail on Thursday requesting comment on his note, which describes what Haywood analysts found at each site and includes photos.

The Haywood analysts wrote Thursday in their report that the site visits were “largely in line with our expectations and confirm that there are operations ongoing.”

In December, the short-sellers wrote that their investigator visited the office in mid-November and saw five people working there. They showed pictures of farmland and a pilot greenhouse posted on the Colombian target company’s website that were “rather underwhelming.”

But the Haywood analysts said Thursday that they saw work being done on Aphria’s farm in Colombia. They said 40 labourers were working onsite, adding that crews have been working on levelling the land, relocating power lines and on drainage efforts. The analysts also visited an office, where eight people were employed.

Haywood analysts said they travelled to Buenos Aires, where they toured a distribution centre owned by Aphria that stores pharmaceutical products for distribution, as well as a pharmacy that sells typical over-the-counter items and fulfills prescriptions. They also said local management provided them with a document showing that the Argentine company had booked US$11-million in sales in 2017. The Globe was showed similar documentation.

The short-sellers had alleged that the pharmacy was in a rundown part of Buenos Aires and that the warehouse was “an empty, dilapidated office" with “no signs of existing operations" when they visited in October. They also said they spoke to an employee who claimed the company generated just US$430,000 in sales in 2017.

In Jamaica, Haywood said it visited Aphria’s head office in the country – which the analysts acknowledged was “modest” – as well as a retail store awaiting final licensing and a farm where Aphria is legally growing cannabis. Thursday’s report said that limited growing is taking place during December and January, and added that a large harvest was completed in November. Aphria has amassed inventory of nearly 2,600 kilograms of cannabis in Jamaica that will be sold once the company is approved to do so, the report said.

Among their allegations, the short-sellers had claimed that the retail store didn’t exist and that their researcher wasn’t able to find the cannabis farm. They said that nobody was at the company’s office in Kingston during business hours when they went to visit in October. Mr. Anderson declined to comment on Thursday. 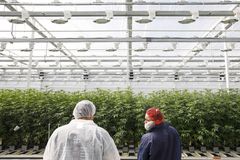 Aphria’s dealmaker: How a self-described outsider found himself in the hot seat Subscriber content
January 6, 2019 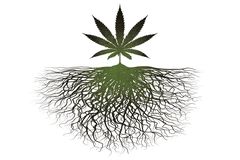 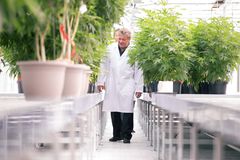