A prominent American short-seller is taking another swing at Canada’s red-hot cannabis industry, this time sounding the alarm on the drastic run-up in Tilray Inc.’s stock.

Citron Research tweeted on Tuesday that it is now betting against shares of the Nanaimo, B.C.-based cannabis grower nearly three weeks after Citron said that Tilray was both “best in class” and “the next company to get a white knight at a premium to market” after Constellation Brands Inc. revealed plans to invest $5-billion in Canopy Growth Corp.

Now, Citron is changing its tune about Tilray, calling it “by far the most expensive in the space,” in a tweet on Tuesday.

Citron's about-face on Tilray will come as a whiplash to investors in the volatile cannabis sector. Tilray is the second U.S.-listed pot stock that Citron has attacked in the past three trading sessions, accusing Cronos Group Inc. of being "just one big stock promo" in a report published last Thursday.

“I think people are not understanding what the space looks like, how competitive it is, what the margins look like," Andrew Left of Citron said in an interview. "People just hear pot and they think, 'Oh, let’s buy it, it’s the next big thing.’ It’s just so stupid and ridiculous."

When Citron published its positive report on Aug. 15, Tilray’s stock was trading under US$30 and had been on a tear since going public on the Nasdaq in July at US$17. Citron was targeting US$45 a share in its report but Tilray’s stock has blown by that price, more than doubling in value.

In its tweet, Citron pointed out that analysts at U.S. investment bank Cowen Inc., which took Tilray public less than two months ago, raised their price target for Tilray last week to US$62 a share from US$34 despite lowering their revenue estimates for fiscal 2018 and 2019.

“Tilray 3x more expensive than leader Canopy despite no beverage deal, behind in funding and lower capacity,” it said in another tweet.

On Tuesday, investors ignored Citron’s latest warning shot by pushing Tilray’s shares 18 per cent higher to US$77.01. The dramatic rally has given Tilray, a company with quarterly sales of just US$10-million, a market cap of nearly US$7.1-billion.

Tilray, which declined to comment on Citron's tweet, is one of two U.S.-listed Canadian pot stocks to be attacked by Citron in the last three trading days.

Last Thursday, Citron published a damning report on Cronos, sparking a nearly 30-per-cent drop in its Toronto shares on heavy trading volume. But on Friday and Tuesday, shares of Cronos erased most of those losses, jumping 28 per cent between both days, or $3.23, to $14.65.

The stock rose 14 per cent on Tuesday, buoyed by news of a partnership Cronos struck with Boston's Ginkgo Bioworks.

The deal will see the two companies study and try to produce eight different types of cannabinoids in a lab – a bid to create a proprietary process that will help Cronos gain scale and its lower costs. Cronos says these cannabinoids are currently found in the cannabis plant in limited quantities and can be pricey to extract today. Whatever they develop could be used by Cronos to formulate a new edible, beverage or medical product in the future.

Cronos is earmarking US$22-million for this research and could issue shares to Ginkgo worth up to US$100-million if certain milestones are met.

"We don't want to be the farmer," said Mike Gorenstein, chief executive officer at Cronos. "Our end goal is products and brands. We think that we get there by specializing in the active pharmaceutical ingredients [API] and we leverage that to get to the other parts of the value chain." 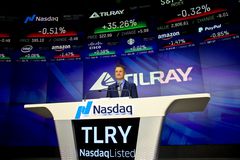