The past few months have been a blur of activity for Clint Seukeran, owner of Ganjika House, a new cannabis store that just opened in Brampton, Ont. The entrepreneur was still ironing out his point-of-sale software system Monday morning as dozens of customers filed into his dispensary, located in a strip mall in the city northwest of Toronto.

“We had a timeline, we had our regulatory requirements, financial requirements, it was all very condensed into 2½ months,” said Mr. Seukeran, taking a brief pause from greeting customers, giving instructions to his “budtenders” and chatting with sales representatives from licensed cannabis producers.

“I sometimes got two or three hours of sleep a night, but we made it happen,” he said.

Ganjika House is one of nine stores in Ontario that opened on April 1, the date given by the provincial government for the start of private bricks-and-mortar cannabis retail in Ontario.

The Alcohol and Gaming Commission of Ontario awarded 25 retail licences in January, but many of the licence winners have struggled with the short timeline for store construction, community consultation and employee training.

“From the moment I learned I had won, it has been just a whirlwind,” said Hunny Gawri, owner of the Hunny Pot, located in downtown Toronto. Hunny Pot was the only cannabis store to open in Toronto on Monday.

“I’ve been staying downtown for the last week-and-a-half straight and every single day it has been late nights here [at the store] until two or even three in the morning,” he said.

The piecemeal rollout of cannabis stores in Ontario is the result of several factors, including the industry-wide shortage of legal cannabis grown and shipped by licensed producers. More directly, it’s due to the Ontario government’s decision in December to cap the number of retail stores opening in April, and to award the initial 25 licences through a lottery.

Hundreds of would-be retailers who had rushed to secure property throughout the summer and fall, in expectation that as many as 1,000 licences would be awarded, were left sitting on expensive leases. The actual lottery winners included people with little or no experience with either cannabis or retail.

Both Mr. Seukeran and Mr. Gawri are experienced businessmen; Mr. Seukeran runs a beverage manufacturing and import business called CGS Foods Inc. while Mr. Gawri has a background in real estate. Even for them, opening a retail store in a matter of months was a challenge.

“There are so many different moving parts and making them all come together, whether it is from the design aspect, the marketing materials, the fixtures, the renovations and even painting and then the training for your staff, is all going on at the same time and there just aren’t enough hours in the day,” Mr. Gawri said.

When introducing the licence cap, the provincial government cited the shortage of legal cannabis, saying it could not, “in good conscience issue an unlimited number of licences to businesses in the face of such shortages and the federal government’s failure to provide certainty around future supply."

So far, Mr. Seukeran has had little indication that supply will be an issue for Ganjika House, although he’s well aware of broader supply problems. The store has secured enough cannabis from the Ontario Cannabis Store (OCS), the provincial wholesaler, to last several weeks, “depending on demand," he said.

“The team at OCS is fantastic. Whether or not they’ll be able to get the supply, I’m not sure if that’s in their hands. If there is a shortage, the [licensed producers] are the ones who really need to step up the game and re-divert supply here if needed," he said.

For the customers who lined up outside Ganjika House early Monday morning, concerns about supply were overshadowed by questions about quality. Most of the people who said they had ordered legal cannabis from the OCS e-commerce store said the product was worse than what’s available in the black market and more expensive.

There was a general sense, however, that people were keen to give the legal market a chance.

“Pricing is a lot cheaper [in the black market], but then you don’t really know what you’re getting,” said Mike Klamann, who was fifth in line. “I’m more inclined to come here a couple times a month, as opposed to spend money where I don’t know what I’m getting.”

This was echoed by Fox Scott, who said she used cannabis for medical reasons, although bought it from illegal dispensaries rather than existing medical marijuana channels.

“If one was much cheaper than another, I might switch to that one, but I’d much rather [buy] legal than not,” she said. 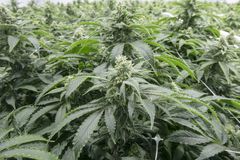 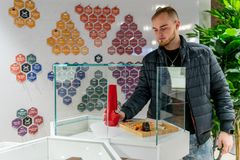 Follow Mark Rendell and Jameson Berkow on Twitter @mark_rendell @grassreporter
Report an error Editorial code of conduct
Due to technical reasons, we have temporarily removed commenting from our articles. We hope to have this fixed soon. Thank you for your patience. If you are looking to give feedback on our new site, please send it along to feedback@globeandmail.com. If you want to write a letter to the editor, please forward to letters@globeandmail.com.
Comments