Canadian cannabis stocks dropped sharply on Friday as the scandal at CannTrust Holdings Inc. continued to shake investor confidence in the sector and raise worries that future deal making could be at risk.

On Thursday evening, CannTrust announced that it is halting all sales while federal regulators investigate the company’s manufacturing facility in Vaughan, Ont. The news came four days after CannTrust acknowledged Health Canada had issued a non-compliance order to CannTrust for growing thousands of kilograms of cannabis in five unlicensed rooms in its 12-room greenhouse in Pelham, Ont. between October, 2018, and March.

CannTrust shares dropped 17.3 per cent on Friday to finish the week down 48.3 per cent, amid concerns that the company could lose its licence or, at least, be forced to destroy thousands of kilograms of product worth tens of millions of dollars.

Opinion: Allegations against CannTrust are a black eye for the entire cannabis industry

Weeded out: Bruce Linton being fired from Canopy is a sign the sector is maturing

While the fallout has been particularly dramatic for CannTrust, the implications of Health Canada’s investigation are being felt industry-wide. Institutional investors who were starting to warm to the sector are reassessing their interest. Meanwhile, concerns are mounting that Health Canada may respond to the compliance breach by increasing regulatory demands.

“We advise U.S. banks quite a lot in this space, those who are in deals and those who are thinking about getting into deals, and the top-of-mind issue for them is always legal compliance," said Patricia Olasker, a partner with Davies Ward Phillips & Vineberg LLP who leads the firm’s cannabis practice.

“There’s always been an amount of skepticism about the Canadian industry’s compliance. We have always pointed out that it is a highly regulated industry, with rigorous rules, and that this should be a great source of comfort. I think people have been comforted by that, and then CannTrust happens and it really shakes people’s confidence," she said.

“Any lawyer you talk to will say they have a number of deals that could be impacted by this,” she added.

CannTrust, which is led by former chief executive of Tangerine Bank Peter Aceto, was viewed as one of the highest-quality operators in the space. The company is listed on the Toronto Stock Exchange and the New York Stock Exchange, and has partnerships with firms such as drug manufacturer Apotex Inc. and alcohol distributor Breakthru Beverage Group.

“It definitely hurts investor confidence. I think that people are seeing everything going on with CannTrust, and probably a question that’s on their mind is: Is this going on with other licensed producers?” said Ryan Macdonell, an analyst with GMP Securities, in an interview. Mr. Macdonell changed his rating for CannTrust to “under review” on Friday, indicating an inability to analyze the stock, given the amount of uncertainty surrounding the company.

A significant blow to investor confidence could have major implications for an industry where few companies are cash-flow positive, and most rely on equity financing for both capital expenditures and everyday operations.

Eric Foster, who leads the cannabis practice at Dentons Canada LLP, said that the implications of CannTrust’s woes could go beyond the equity markets.

“Increasingly, we’re seeing bigger banks come in and more traditional lending opportunities be available to licensed producers. But something like this is going to be an ongoing diligence concern,” he said. “Cannabis companies may find it increasingly challenging to get that commercial bank debt financing, and accordingly will have to look at capital markets. With a depressed stock price it can become problematic.”

A big unknown in all of this is how Health Canada will respond. The federal regulator has the power to suspend or revoke CannTrust’s licence, although it has not indicated how it intends to proceed.

“Any major failure in a regulated industry is going to lead to more requirements over all for others in that industry. So while [Health Canada] hasn’t declared that they would do that, it could certainly be an implication of the fallout," said Karina Lahnakoski, vice-president, quality and regulatory at the consulting firm Cannabis Compliance Inc.

“I came from [the pharmaceutical industry], where whenever there is a major failure, the regulators need to react by putting in more requirements, either more reporting requirements, more inspection requirements, updating their guidance documents. There usually is a reaction. You may not see it right away. But Health Canada will definitely take this as a learning opportunity,” Ms. Lahnakoski said.

Health Canada had conducted three inspections on the company’s greenhouse since the Cannabis Act came into effect in October, Health Canada spokesperson Tammy Jarbeau wrote in a statement to The Globe and Mail.

“Prior to the recent inspection at CannTrust’s [Pelham] site, which resulted in a non-compliant rating, two inspections were conducted to assess the licence holder’s compliance with good production practices (e.g., product quality) and compliance with odour controls,” Ms. Jarbeau wrote.

The regulatory situation is particularly worrisome, said Ms. Olasker of Davies, because Health Canada’s own monitoring system does not appear to have caught the infraction. Rather, Health Canada appears to have begun its investigation after receiving a whistle-blower tip from a former employee.

“Two things we’re telling our clients, is take comfort from the fact that Health Canada reacted very quickly. Within a day or two of being informed of the issue, they were responding," Ms. Olasker said.

"I think as well, you might point to this as a stern warning to other producers: Comply or risk a beating in the stock market. That might make the next guy less prepared to pull plywood walls over illegal grow operations.”

In an interview with The Globe on Friday, Mr. Aceto, the CEO of CannTrust, said the company decided to halt sales after Health Canada began inspecting the company’s facility in Vaughan.

“As an abundance of caution we voluntarily decided that we were just not going to ship product out of our facility until we worked through our discussions with Health Canada,” Mr. Aceto said.

He declined to say what he or other top management knew about the illegal growing operations.

“We’ve got this independent committee of the board, they’ve commissioned a full root cause analysis, and until that work is done, we’re just not in a position to know or articulate exactly what happened,” Mr. Aceto said. 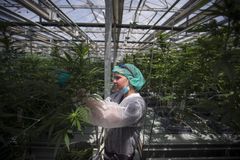 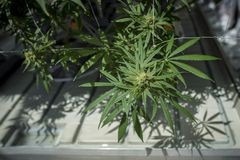 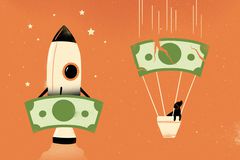 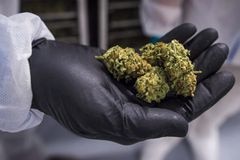