Investment banks are struggling to find buyers for Aurora Cannabis Inc.'s stake in The Green Organic Dutchman Ltd., with roughly 40 per cent of the deal unsold, according to people familiar with the transaction.

Late Tuesday, Aurora signed an agreement to unload its remaining equity stake in TGOD through a group of investment banks led by BMO Nesbitt Burns. The $86.5-million deal was priced at $3 a share – a 14.5-per-cent discount to Green Organic’s closing price of $3.51 on Tuesday.

Unlike most Canadian share sales, which are conducted by way of a bought deal, BMO structured the deal as a block trade. Typically this format is used when there is ample demand from investors, so the investment banks mostly serve as intermediaries that quickly match the buyers with the seller.

However, many institutional buyers have balked at the Aurora stake, leaving the underwriters on the hook for any unsold stock, according to capital-markets sources who were granted anonymity because they weren’t authorized to speak publicly about the transaction. TGOD’s shares closed at $2.94 on Thursday, slightly below the $3-per-share purchase price paid to Aurora.

The lacklustre demand is further evidence that Canadian cannabis companies are entering a new era – one in which investors are demanding profits over expansion potential. The Horizons Marijuana Life Sciences Index ETF, which tracks the Solactive North American Marijuana Index, has fallen 39 per cent since recreational cannabis use was legalized in October. TGOD’s shares have fallen 57 per cent since the company’s last financing announced the same month.

He gave several possible reasons. "Cannabis stocks have performed poorly, we’ve seen CannTrust, we’ve seen the losses out of some of the larger producers and people are sort of pausing and saying, ‘I’m not sure these valuations make sense,’ ” Mr. Ruscetta said, referring to CannTrust Holdings Inc., a cannabis grower that is under investigation by Health Canada for growing cannabis in unlicensed rooms.

A number of U.S. institutional investors who were starting to put money into Canadian cannabis deals have also been spooked by recent events, he said.

“The institutional investors who have typically purchased these equity deals and private placements have for the most part moved on to the U.S. And there’s obviously been some loss of faith in the [Canadian] LP market, with the financial results that Canopy put out and everything that happened with CannTrust‚” said Mr. Salz, referring to Canopy Growth Corp.’s recent quarterly financial results, which fell short of analyst expectations.

The TGOD stake isn’t the first casualty of this trend. Over the summer, Kelowna-based grower Flowr Corp. tried to raise $125-million but had to cancel the deal in late July, citing “prevailing market conditions." Flowr was ultimately able to raise some money in August, but only $43.5-million.

Aurora was an early backer of TGOD, investing $55-million in the Mississauga-based producer in January, 2018, and another $23-million in the company when it went public in May, 2018.

The two firms, however, have been moving apart since September, 2018, when Aurora’s chief corporate officer Cam Battley stepped down from TGOD’s board of directors with no explanation from either company.

His departure from the board is one of the reasons that Aurora’s stock could be sold through a block trade. This deal structure can be used so long as the seller doesn’t have a “control block” – which tends to mean selling less than 20 per cent of a company’s shares, and having no seats on the affected company’s board of directors.

While underwritten block trades are rare in Canada, they have been used in some instances. This structure costs the seller less. The fee paid to investment banks for a bought deal is usually around 4 per cent. For selling the Aurora stake, they earn 2 per cent. 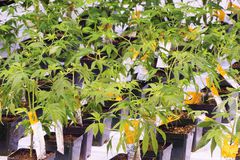