The City of Toronto has started building walls of 4,000-pound cement blocks outside illegal cannabis dispensaries, after spending months exhausting other efforts to stop these storefront operations.

The most recent target is CAFE, a dispensary operating illegally in four locations in the city. Early Wednesday morning, the city arranged for the placement of large cement blocks outside the entrances of the shop’s Fort York Boulevard and Harbord Street locations, blocking off entry to the buildings. The remaining two locations, on St. Clair Avenue West and Bloor Street West, were blocked off on Thursday morning.

“There’s a well-known history of their defiance of the rules," said Mark Sraga, the city’s director of investigation services. The city has been laying charges against CAFE since November. “We’ve even tried steel doors, and welding of steel doors and putting steel plates over windows, but I was like, ‘Let’s block them in.’ ”

The measure was first used a couple months ago to block off a different dispensary on St. Nicholas Street. Mr. Sraga said the blocks are still there, and will remain as the charges against the dispensary go through the courts. The city says its enforcement efforts have generally been successful so far, bringing the number of illegal dispensaries down from 36 the day pot was legalized to fewer than 10 currently.

Mr. Sraga noted that since November, CAFE has more than 70 charges across its locations, not including charges pending from this week’s efforts.

However, he added that Wednesday night, someone used a crane and “stole” several of the cement blocks outside the Fort York location and resumed operations in the dispensary. The city replaced the blocks Thursday morning.

Earlier Wednesday, authorities removed a man from the same location after he called for help from the sealed-off building. Mr. Sraga said the city found evidence that someone had broken into the dispensary from a different door.

He added during an inspection, “we walk through the whole building with our unit, with the police ... we were there for a couple of hours,” noting they had not seen anyone in the building at that time.

Mr. Sraga said the bigger blocks, which weigh around 4,000 pounds, cost around $100 each, but noted that the costs are being covered by the provincial government’s funding to the city for cannabis enforcement.

Some who work in the legal industry think the city’s solution is odd.

“It’s a bit unusual,” said lawyer Gerald Chan, commenting on the city’s choice of blockage methods, but noted that the Cannabis Control Act does give authorities the ability to bar entry into a dispensary that doesn’t have a licence. He is a partner at Stockwoods LLP and has represented cannabis dispensaries in the past.

In an e-mailed statement to The Globe on the blockages, CAFE said the way cannabis retail has been implemented in the province is inadequate and that they believe the dispensary has filled the void. 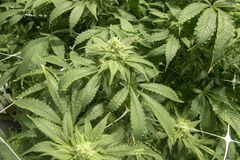 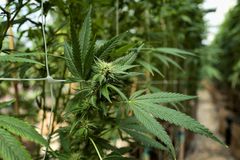