Police have arrested 18 people on cannabis-related charges outside of illegal dispensaries, amid a feud between the owners of the chain and the city.

The Toronto Police Service arrested 17 adults and a minor outside the Fort York Boulevard and Harbord Street locations of CAFE, a chain of illegal cannabis dispensaries. The individuals are charged with cannabis-related offences taking place outside of the buildings.

The arrests come after the city’s Municipal Licensing and Standards department arranged for the placement of cement blocks outside all four CAFE locations last week. Within hours, individuals removed blocks at three locations with the help of a crane in at least one of the stores, and attempted to do the same at the fourth before police intervened.

The city replaced the blocks late last week and as of Monday, there were no new reports of blocks being removed.

However, people began selling the drug outside of the blocked-off stores over the weekend.

“As long as our barring of entry and closure orders remain complied with, from Municipal Licensing and Standards’ perspective, there’s not much more we can do,” said Mark Sraga, director of investigation services. He added Toronto police are handling the issue of people selling cannabis outside on the sidewalks.

On Monday, people gathered at the Fort York CAFE location, but it’s unclear what activity was taking place. At the Harbord Street location, lawn chairs were laid out in front, where people were seen buying cannabis and signing petitions.

Nadine Bodgener was among them. She said she uses cannabis for anxiety and insomnia.

“I’ve had my medicinal licence for years and upon [legalization] of the recreational market, my licensed producer quit supplying,” she said.

Instead, she tried one of the licensed stores in Toronto and found the employees there didn’t have much information about the different strains and amount of THC in the products.

“The budtenders [at CAFE] know exactly … the best kinds of strains to treat different things,” she said, explaining why she wanted to purchase from the unlicensed store.

Zach Walsh, an associate professor at the University of British Columbia, said one solution to the problem of unlicensed dispensaries is to ensure that medical-cannabis users have adequate access to the product. He called it “absurd” that people were still getting into the dispensaries despite the cement blocks.

“It says that people are not getting access through the legal system right now,” he said.

In an e-mail, David Shuang, a spokesman for CAFE, said the chain has helped cannabis users who cannot otherwise find adequate access, despite legalization.

“Some of them are employees of the CAFE,” said Constable Jenifferjit Sidhu. She said that when the crime occurs outside of the dispensary, it’s enforced by the police, while any crimes occurring inside the building fall to the city’s bylaw officers.

“Our focus at this moment is on enforcing the people that are selling the illegal product,” said Constable Sidhu, when asked whether police would pursue the individuals who purchased the product illegally.

Toronto Police tweeted on Sunday that individuals were participating in sales outside two illegal dispensaries. In one case, the sellers fled when police arrived and left behind iPads with the names, financial information and orders of individual customers. 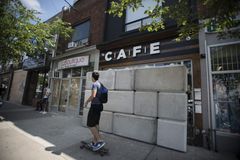 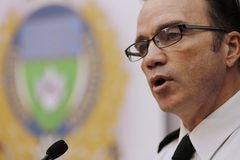 Vancouver police shut down multimillion-dollar drug operation
Subscriber content
July 22, 2019
Follow Maria Iqbal on Twitter @maria9860
Report an error Editorial code of conduct
Due to technical reasons, we have temporarily removed commenting from our articles. We hope to have this fixed soon. Thank you for your patience. If you are looking to give feedback on our new site, please send it along to feedback@globeandmail.com. If you want to write a letter to the editor, please forward to letters@globeandmail.com.
Comments are closed