Cannabis-industry pioneer Bruce Linton’s sudden departure from Canopy Growth Corp. signals the company’s pullback from its own frenetic pace of expansion, but the sector’s deal flow shows no sign of letting up.

The forces that have generated billions of dollars in pot deals remain – in an industry still less than a year out from legalization. They include a need for consolidation among hundreds of current and would-be holders of Canadian cultivation licences, a push to expand product offerings into oils, extracts and edibles and the expectation that Washington will legalize cannabis at the federal level in the United States.

Another driver of merger and acquisition activity – the ambitions of major consumer products companies to establish footholds – will bring more deals but also the expectation that financial discipline will be imposed on what has been a free-wheeling business dominated by entrepreneurs. Mr. Linton’s termination as Canopy’s co-chief executive and chairman at the hands of its major shareholder, booze giant Constellation Brands Inc., was an early indication.

As it stands, there are too many cannabis cultivators seeking riches for the industry to be efficient and cost-effective, and that means fertile ground for deals, said Greg McLeish, an analyst at Mackie Research. Currently, there are 186 holders of Health Canada cultivation licences, and not all will be able to attract the necessary financing to make a go of it.

“What it says to me is there are a number of companies out there that are very small and have licences which could be attractive acquisition opportunities to the right player,” Mr. McLeish said.

“I think what everyone is realizing is that cannabis is harder to grow than they thought. And if there’s a good growing or cultivation asset, it might be worth taking a look at.”

Deal activity remains intense, and the industry has an easy time raising capital for acquisitions. Year-to-date, M&A deals in Canada and the United States have numbed 195, including 137 among public companies, according to New York-based Viridian Capital Advisors. That compares with 148 deals, including 115 public ones, by this time last year.

Activity is broadly distributed among growers and extractors, as well as real estate, cultivation technology and biotech players. However, cultivation and retail companies have done the lion’s share of the buying this year, according to Viridian. Meanwhile, the industry has raised more than US$7-billion in debt and equity capital, an indication that more transactions are in store.

Smiths Falls, Ont.-based Canopy grew to garner a market capitalization of as much as $22-billion from virtually nothing within about five years. Over that time, Mr. Linton presided over more than a dozen acquisitions.

The most recent is Canopy’s unusual US$3.4-billion friendly offer for U.S.-based Acreage Holdings. The deal involves an immediate US$300-million payment to Acreage along with the right to acquire all of its outstanding shares if U.S. laws change at any point over the next 7½ years.

However, it was Mr. Linton’s decision last year to bring Constellation, the distributor of such brands as Corona beer and Kim Crawford wines, into Canopy as a major shareholder that has come back into focus. Constellation made no secret that it expects to see improving financial results for its $5-billion investment, which remains the industry’s largest. Canopy has so far failed to deliver, reporting a worse-than-expected quarterly loss last month, a factor said to have played into Mr. Linton’s termination.

However, Baron Lee, a portfolio manager at Calgary-based Matco Financial, said he does not expect a change in Canopy’s focus to squelch industry-wide deal flow.

“Cannabis is an emerging industry and continues to evolve. There’s still a lot of risk. Right now it’s just a top line story. There’s only a handful of cultivators out there that have generated positive EBITDA [earnings before interest, taxes, depreciation and amortization]. With legalization just last October, year-over-year revenue growth will be pretty significant," Mr. Lee said.

Investor fears linger about sky-high valuations that acquisition targets have fetched, along with deals that have been paid for in acquirers’ shares. Some may lead to future writedowns, and Mr. McLeish said he is concerned about the ability of buyers to digest new assets as they also expand their own growing operations.

“What scares me in the industry is that companies are going out and aggressively acquiring companies. I sometimes feel that the integration teams within those companies are stretched, and because they’re stretched, what it means is it’s going to take longer to integrate the operations than was previously planned." 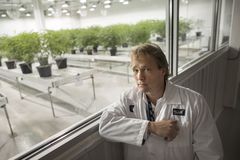 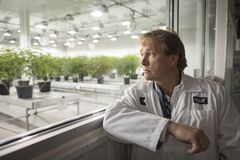 'My turn is over’: Canopy Growth’s Bruce Linton steps down as co-CEO and board member
July 3, 2019