This weekend, The Globe and Mail is publishing an extensive examination of the Toronto Ford family's decades-old connection to illicit drugs. We are doing so with utmost caution, journalistic rigour and legal scrutiny – ultimately believing that Torontonians and, more broadly, Canadians need to understand the background of the most politically powerful family in the country's biggest city.

An 18-month investigation by reporters Greg McArthur and Shannon Kari reveals that Toronto Mayor Rob Ford's brother Doug sold hashish for several years in the 1980s, in the Toronto suburb of Etobicoke. Another brother, Randy, was also involved in the drug trade, and charged in relation to a drug-related kidnapping. Their sister, Kathy, has been the victim of drug-related gun violence.

Mr. McArthur, one of the country's most respected investigative reporters, began work on this project in late 2011, in an attempt to detail the history of the Fords. Although Rob Ford had been well-documented as a councillor and mayor, little existed on the public record about his older brother Doug, who has emerged as a force in the mayor's office and across the city.

We have approached Rob and Doug Ford several times to speak to the allegations. A senior Globe editor visited Doug Ford, privately, to explain the purpose of our research. Doug Ford rebuffed our entreaties, and aggressively threatened legal action.

As we approached publication, we returned to three fundamental questions that readers should rightly ask of us:

How reliable is our information?

We located and interviewed 10 people who claimed to have contact with Doug Ford over illicit drugs. Each individual said they were afraid to attach their name to the story, citing the Ford family's power in Toronto.

They did, however, speak at length, and in detail. Throughout we consulted with our legal counsel.

Is this information of public interest?

Rob and Doug Ford hold sway over much of the city's business and have influence on a range of public affairs, including policing. They have campaigned on anti-drug platforms, as outlined in the story, and spoken in recent years of the need to do more to stop drug-related crime, without ever acknowledging the family's own struggles. The rest of city council, and citizens at large, deserve to understand the moral record of their leaders. In most matters, public or private, character matters.

Our investigation has been ongoing since late 2011. The reporters were sent back multiple times to find more witnesses, corroborate details and further authenticate information provided in previous interviews. We decided to publish their work this week, given the intense public interest around the Ford family and alleged substance abuse. After Rob Ford spoke to the media on Friday afternoon, carefully saying he does not use crack cocaine and is not addicted to crack cocaine, a group of senior editors met again, reviewed the story, and concluded again that it is in the public interest to publish. Indeed, we felt it would be irresponsible not to share this information with the public at this time.

Kofi Annan has had a front-row seat to world events for nearly 20 years and has a simple message for anyone concerned about sectarian violence almost anywhere: be patient and keep talking.

I interviewed Mr. Annan in Ottawa Thursday night at an event hosted by the Global Centre for Pluralism, which is located in a stunningly designed structure on Sussex Drive built by the Aga Khan and the Canadian Ismaili community. Mr. Annan spoke about his challenges in defusing the Syrian crisis, his success averting a sectarian war in Kenya a few years ago, and his dealings with Saddam Hussein, George W. Bush and Tony Blair.

You can watch video highlights of our discussion here:

Over dinner afterward, he spoke frankly about the need for patience. Egypt, he said, could take 15 years to stabilize. Syria is a decade-long project, with or without Bashar al-Assad in power. He encouraged even middle powers such as Canada to play a role in getting the many sides in a conflict to talk. Sometimes they need to talk for years. But he recounted his visit to Baghdad in 1998 to convince Saddam Hussein to open his palaces to inspections – and felt he was succeeding as long as Saddam was willing to talk.

It's the sort of appeasement that many conservatives feel plays right into the hands of dictators and war-mongerers. Mr. Annan says a greater challenge is the big powers who "talk over one another." Case in point: Russia and the United States, which he feels undermined a peace agreement for Syria last year because they weren't listening to one another. He thinks John Kerry is changing that and winning confidence with Moscow.

Any further failure, he warns, will lead to an explosion of conflict in and around Syria. Message to Canada: help keep parties to the conflict talking. 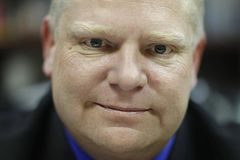