On Thursday's front page of the Metro edition of The Globe is an exclusive story by Toronto City Hall bureau chief Kelly Grant about a confidential list of citizen candidates for city boards . Council opponents of Mayor Rob Ford charged that nearly three-quarters of the people on that internal list, allegedly prepared by the mayor's office, were selected to serve.

The story says that The Globe viewed only a partial copy of the list, but it doesn't say how it saw the list.

You might have guessed from the photograph accompanying the story on the front page that that is how the list was viewed and you would be right. The photograph was of the mayor's brother, Councillor Doug Ford, holding up the confidential document.

The Globe's Peter Power, a very experienced and talented news photographer, was in the media gallery at City Hall covering the debate. Doug Ford stood up and while addressing council, held up a sheaf of purple-coloured papers. Mr. Power photographed the scene for more than a minute using his normal lenses for that type of assignment and focusing on the speaker, Doug Ford.

During council's debate Wednesday, councillors were handed confidential copies of an internal list of names prepared purportedly by the mayor's office. They were on purple pages, which are always confidential. Several councillors, including Doug Ford, waved the lists around as they spoke.

After another councillor finished speaking while holding the confidential list, Deputy Speaker John Parker, who was in the speaker's chair at the time, had this to say: "I will pass along a word of advice I just received from the [city] solicitor. We've all got these sheets, these purple sheets with names on them. Be reminded that there are such things as telephoto lenses. Let me just mention the name Marc Lalonde and if anyone needs further elaboration, come on up here and I'll fill you in on the rest of the story. I urge you all to govern yourselves accordingly."

At that point it was too late. Mr. Power had taken his photographs. Although he couldn't read the names on the list, later when editing his photographs on a laptop he realized the list was legible in some of the image.

As Mr. Parker noted, it was almost 30 years ago when Mr. Lalonde, then federal Finance minister, invited television cameras in to film him reading his budget before it had been delivered in Parliament. Mr. Lalonde joked with the television cameramen, "This is the budget. Have you got any of those zooms."

They used their normal cameras and were easily able to view and report on part of the budget. Despite opposition calls for his resignation, Mr. Lalonde shrugged and said he thought the whole tradition of budget secrecy was outdated.

It is not up to journalists (photographers and reporters) to protect the confidences of political leaders. If they are taking photographs in public places or places where they are invited (such as behind Mr. Lalonde's desk), then their only duty is to report on what they see and know that is in the public interest, so the public can make informed choices and decisions. If journalists read or see documents on a desk that are left out or documents that are waved in public and those documents are in the public interest, they must report on it.

Please comment if you agree or disagree. Or send me an e-mail to publiceditor@globeandmail.com on this or any other issue. 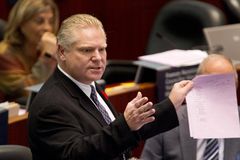 Public editor: Superstorm Sandy reminds us of the value of still photography
April 4, 2017
Grammar mistakes to sink the best of us
April 4, 2017
Follow Sylvia Stead on Twitter @SylviaStead
Report an error Editorial code of conduct
Due to technical reasons, we have temporarily removed commenting from our articles. We hope to have this fixed soon. Thank you for your patience. If you are looking to give feedback on our new site, please send it along to feedback@globeandmail.com. If you want to write a letter to the editor, please forward to letters@globeandmail.com.
Comments